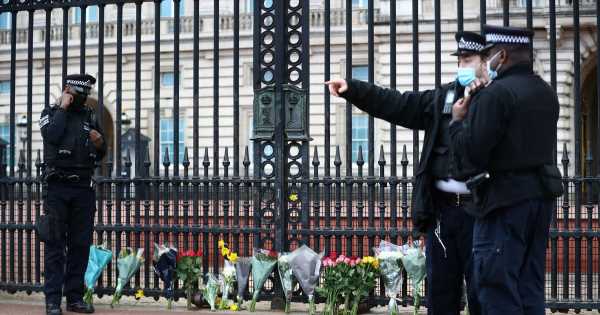 Brits mourning the death of Prince Philip have been asked not to go to Buckingham Palace and to respect Covid regulations.

Police have been spotted outside the Palace, located in the City of Westminster in the UK's capital as mourners visit to pay tribute to the late Duke of Edinburgh.

The Queen announced her husband, who would have turned 100 in June, died on Friday April 9 at their Windsor Castle residence.

In a statement on behalf of the Palace, a Cabinet Office spokesperson urged people not to gather at Royal Residences during this "extraordinarily difficult time."

People were asked to continue to "follow public health advice" and avoid "meeting in large groups on minimising travel."

"The sad death of HRH The Duke of Edinburgh has been announced by Buckingham Palace.

"Although this is an extraordinarily difficult time for many, we are asking the public not to gather at Royal Residences, and continue to follow public health advice particularly on avoiding meeting in large groups and on minimising travel.

"We are supporting the Royal Household in asking that floral tributes should not be laid at Royal Residences at this time."

Following the announcement of Prince Philip’s death, Buckingham Palace put a sign on the gates leading to the famous landmark.

On it was the Queen’s statement, which read: "It is with deep sorrow that Her Majesty The Queen announces the death of her believed husband, His Royal Highness The Prince Philip, Duke of Edinburgh.

"His Royal Highness passed away peacefully this morning at Windsor Castle.

"Further announcements will be made in due course.

"The Royal Family join with people around the world in mourning his loss."

According to Sky News, the printed statement has now been taken down, breaking Royal protocol, in a bid to deter people from travelling to the Palace.

It is understood a cabinet meeting will be held a 5pm to discuss plans for tributes and Prince Philip's funeral.

In accordance with his wishes, the funeral for Prince Philip will not be a state event, which would have attracted thousands of people. Philip's royal funeral and burial is expected to take place at St George's Chapel at Windsor Castle, where he and the Queen were staying during the COVID-19 pandemic, Sky News reported, although nothing has been confirmed.

Her Majesty will reportedly take a mourning period of eight-days before all details are confirmed.

A spokesperson for Buckingham Palace said at the time the Duke was "feeling unwell" and had been taken to the facility as a "precautionary measure."

He was then transferred to St Bartholomew Hospital where he underwent an operation on his heart and was treated for an infection.