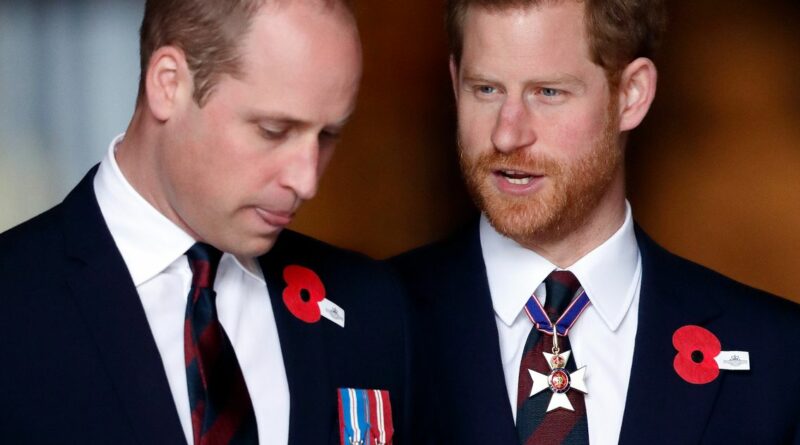 A furious Prince William allegedly ordered an RAF jet to take off without Prince Harry shortly before the Queen passed away, a royal expert has claimed.

Senior members of the royal family boarded an RAF plane from London to Scotland to visit the Queen’s bedside at her Balmoral home.

At the time the Duke and Dutchess of Sussex were in the UK to take part in charity visits.

READ MORE: Harry vs Wills 'fight' in full after book claims he was left with 'scrapes and bruises'

The pair received the call about the Monarch's declining health, but author Tom Bower claims that Meghan was not allowed to accompany her husband.

In the updated paperback version of ‘Revenge: Meghan, Harry and the War Between the Windsors’ Mr Bower claims that Harry was told Meghan was not welcome.

Princess Kate was also missing from the group.

According to The Mirror, William was "unwilling to waste time" and ordered the jet, which Harry had been to travel in, to leave without him.

The book states: "At Meghan’s suggestion, Harry insisted that he would be accompanied by his wife – and that plan was broadcast to journalists at 1.53 pm.

"Meghan’s expectation was astonishing. For four years she had rejected the Queen’s invitations to visit Balmoral but, in her last hours of life, Meghan eagerly sought to make the journey. Firmly, Harry was told that Meghan was not welcome.

"Unwilling to waste more time, William ordered the RAF jet to take off at 2.39 pm. Harry was left to hire his own plane and make the journey alone. He landed in Scotland at 6.46 pm, 14 minutes after the Queen’s death had been announced to the public. She had died at 3.10 pm."

The claims come as the royals also brace themselves for the release of Harry's own memoir Spare next week.

In a leaked extract of that book, it is reported that Harry sensationally claims that he was physically attacked by William during a heated row over Meghan.

In the extract published by the Guardian, the Duke of Sussex alleges a confrontation with his elder brother at his London home in 2019 which left him with a visible injury to his back.

He claims the Prince of Wales grabbed him by the collar and ripped his necklace before knocking him to the floor.

Harry further claimed William had called the American actress "difficult", "rude" and "abrasive" – comments which the younger brother said parroted “the press narrative” about his wife.

The "extraordinary scene" from Nottingham Cottage is just "one of many" which will be featured in Spare when it is published on January 10, it is reported.

The Guardian said it was able to obtain a copy of the book despite “stringent pre-launch security” surrounding it.