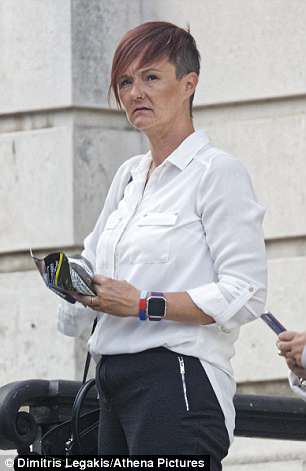 Rebecca Rogers, 38, was knocked unconscious in the outbreak of violence before being carried to safety by convicted criminal Martin Revett

A female prison officer fell for an inmate after he rescued her from a riot – and in return she sent love letters and kept the mobile phone in his cell secret, a court heard today.

Rebecca Rogers, 38, was knocked unconscious in the outbreak of violence before being carried to safety by convicted criminal Martin Revett at HMP Parc in Bridgend.

A court heard married mother-of-five Rogers started to develop feelings for Revett, who was serving three years for assault, at the privately-run jail when he saved her from further injury.

Prison custody officer Rogers wrote 26 ‘romantic and intimate’ letters to the Revett who was serving three years for assault.

She also kept it secret that the prisoner had a prohibited mobile phone behind bars which he used to call her.

Cardiff Crown Court heard Rogers’ marriage was going through a bad patch and she turned to Revett for ’emotional sustenance’.

But her husband wrote to the judge pleading for her not to be jailed for the sake of their young children.

Rogers admitted misconduct in a public office and was given an eight-month suspended sentence. She was also put under a night-time curfew.

Rogers was working at HMP Parc in Bridgend, South Wales, run by security firm GS4 when she met Revett. 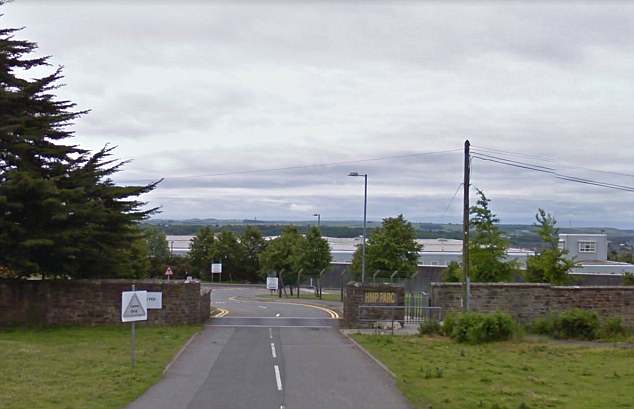 Rogers was working at HMP Parc in Bridgend, South Wales, run by security firm GS4 when she met Revett and she fell for him, writing him love letters and calling him on his prohibited phone

Probation officer Maria Pearce told the court: ‘She became his personal officer after he carried her to safety during a serious riot.

‘Three months later she realised it was developing into a friendship.

‘Although she was aware of its seriousness from her training she didn’t report it to her superiors. 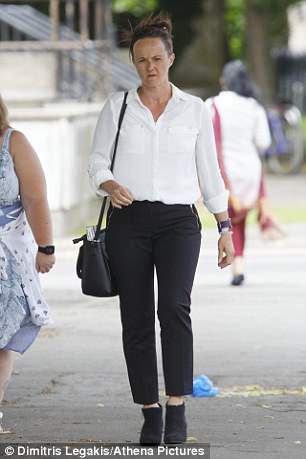 ‘Her professional judgement was clouded by problems in her marriage.’

The court heard Rogers had witnessed a prison death and gone through the ordeal of the riot in 2017.

Mrs Pearce added: ‘She was in a position to be easily persuaded into a friendship with someone who made feel safe.’

Revett was later moved 250 miles to a HMP Moreland in Doncaster where the 26 letters were discovered in his cell.

Rogers admitted writing them and giving Revett her personal mobile phone number for him to call her.

One of her letters said: ‘You made me cry with your such kind words.’

Rogers worked for four years at the category B private prison in Bridgend which holds 2,000 men and male young offenders.

Matthew Henson, defending, said: ‘There was a riot and she was knocked unconscious.

‘The prisoner took her to a place of safety and used what happened as leverage on Mrs Rogers.

‘This happened while her marriage as going through a fractured period and she was looking for emotional sustenance.’

Judge Richard Williams told her: ‘You formed an improper relationship with Revett and had feelings for him.

‘I’ve read the letters and you the overall tenant is that you had become emotional dependent on Revett although it was not a sexual relationship.

‘You connived with him over his possession of a mobile phone.

‘You suppressed information about the mobile phone which is now a criminal offence for prisoners.

‘There was a most serious dereliction of duty and compromised security at the prison where you worked.’

The judge said Revett, who has now been freed from his sentence, had been manipulative in his dealings with Rogers who was vulnerable at the time.

Senior Crown Prosecutor Kelly Huggins said: ‘Rogers was employed in a position of authority, but her actions were unprofessional and went against her obligations as a prison officer.

‘It was clear that Rogers knew the relationship between the two was improper but she continued with it nevertheless.

‘Faced with a strong case presented by the CPS, the defendant pleaded guilty.’