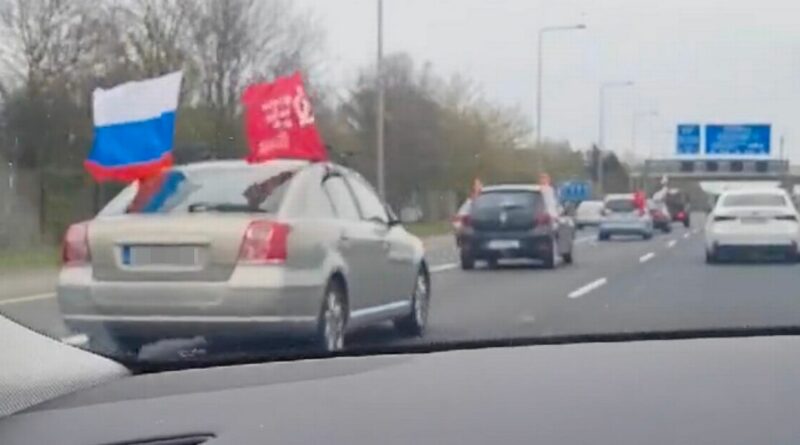 Ireland-based Vladimir Putin backers have cruised down a motorway flying Russian flags in a "disgusting" demonstration.

The invasion of Ukraine where towns have been obliterated and thousands of people killed has clearly not weakened everyone's support for the Kremlin.

A passenger filmed around 10 vehicles travelling on the M50 in Dublin, Ireland with Russian flags and even the letter 'Z' which has become a pro-war symbol since February 24.

Twitter user @JustDave87 posted the video on Sunday with the caption: "I recorded this myself at about 2pm on a motorway in Dublin."

The video was posted in response to a tweet from the Ukrainian Embassy in Ireland sharing a different video showing off the same convoy in an unknown location.

Someone also took to Reddit yesterday (Sunday, April 10) to share their bewilderment at such strong support for a nation sanctioning the murder of civilians in Ukraine.

They wrote: "Just saw a convoy of 10 cars with Russian flags and these smaller red flags heading southbound on the m50. The mind really does boggle…"

One person commented: "Just saw it too, also the large pick up truck with a huge Z painted on the side."

Another who posts under the name Eve's Garden said they deliberately tried breaking up the disturbing line of Putin fans.

Sharing their own video, they wrote: "I saw them, couldn't quite believe what I was seeing. They wanted to form one solid line of cars so we kept getting in between them, making them go around us. I took some video too."

Someone replied sharing their gratitude for the attempt at disrupting the convoy.

They commented: "Not all heroes wear capes – some are just ordinary commuters. Good job and thank you."

The demonstration was blasted by the Embassy for Ukraine in Ireland which tweeted: "It’s absolutely disgusting that these Russians living in Ireland demonstrate their complete disrespect for country of residence and the Irish people who stand against Russia’s war in Ukraine.

"'Z', the symbol of killings & atrocities, must be prohibited by law in every democratic state."

This morning (Monday, April 11), Ireland's Minister of Foreign Affairs said the country will be pushing for a “maximalist” approach to a fourth round of sanctions on Putin’s regime.

Simon Coveney said in Brussels: “Ireland has maintained for quite some time that that we need to take a maximalist approach to sanctions to offer the strongest possible deterrent to the continuation of this war and brutality and that should include, in our view, oil,” he said.