Property lawyer, 44, who drunkenly abused easyJet crew then tried eating his phone while on flight with mother is jailed for 22 months after pilot was forced to lock cockpit and divert plane

A drunk passenger who caused an aircraft to be diverted to Edinburgh Airport after he began eating his mobile phone has been jailed today for 22 months.

Matthew Flaherty, 44, was travelling from Manchester to Iceland with his mother for a birthday break when he began acting unruly during the flight last January.

Flaherty, a property conveyancer from Middlewich, Cheshire, was caught by cabin crew swigging on a bottle of gin he had pulled from an overhead locker just after the easyJet flight had taken off.

He was ordered to put the alcohol away but soon began abusing the crew members by shouting, swearing and issuing threats to kill them.

The drunken yob was warned to behave but he continued with his foul-mouthed rant before grabbing his mobile and chewing on the device. 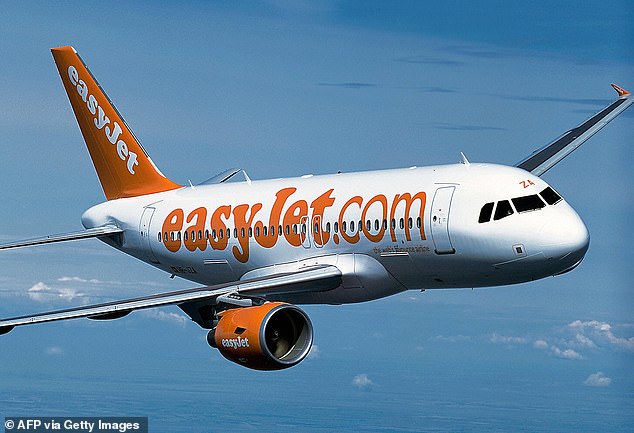 Drunk passenger Matthew Flaherty, 44, who caused an easyJet plane on its way to Iceland to be diverted to Edinburgh Airport after he began eating his mobile phone and swearing at cabin crew, has been jailed today for 22 months. (File photo)

The damaged phone battery then fell on to a seat where it began to smoulder, causing one steward to rush over and douse the mobile in water.

The easyJet cabin crew manager was said to be ‘very intimidated’ by Flaherty’s drunken behaviour and she was ‘worried he would physically harm her’ during his outburst.

The manager reported the incidents to the pilot, who took the precaution of locking the cockpit door and diverting the plane to Edinburgh Airport following Flaherty’s outburst.

Flaherty was met at the airport by police officers who took him to Livingston police station where he continued his rowdy behaviour by racially abusing a constable by repeatedly calling him ‘a n***er’.

Flaherty pleaded guilty to various charges including conducting himself in a disorderly manner and endangering the aircraft when he appeared at Edinburgh Sheriff Court last month.

He returned to the dock for sentencing today where Sheriff Thomas Welsh QC was told the cost of the diversion amounted to an estimated £5,236.

Sheriff Welsh added: ‘The fact of the matter is that the passengers and the crew on this transatlantic airline going to Iceland must have been terrified. 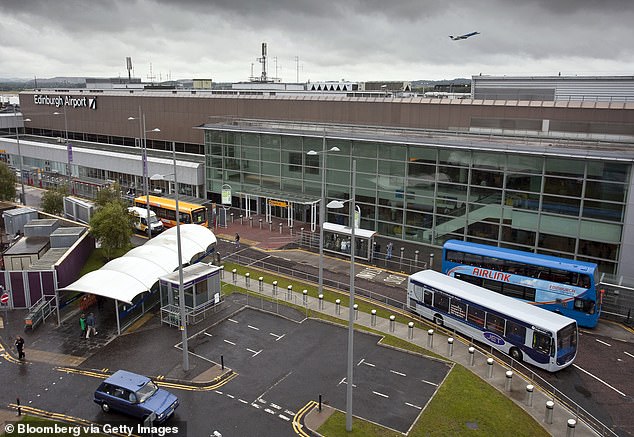 Flaherty, a property conveyancer from Middlewich, Cheshire, was caught by cabin crew swigging on a bottle of gin he had pulled from an overhead locker just after the easyJet flight had taken off last January. The pilot took the precaution of locking the cockpit door and diverting the plane to Edinburgh Airport (file photo) following Flaherty’s outburst

‘You also must have added to the stress that the pilot had to suffer while flying. I am satisfied that custody in your case is inevitable.’

Flaherty was jailed for 22 months.

Previously the court was told the easyJet flight departed Manchester Airport bound for Keflavik in Iceland at around 4pm with six crew and 142 passengers on board.

Prosecutor Jade Doidge said Flaherty was soon seen grabbing a bottle of gin from an overhead locker and drinking from the bottle before he started chatting up a woman.

When the female passenger ignored him, Flaherty began shouting and swearing telling her to ‘f**k off’ and that he was ‘going to kill her family’.

Cabin crew attempted to calm the situation but the drunk thug soon turned on them by stating ‘I am going to kill you if you do not shut up’.

The court heard the cabin crew had never ‘dealt with anything as extreme before’ and the decision was made to divert the aircraft to Edinburgh.

And as the plane began its descent into Edinburgh, Flaherty pulled out his mobile phone and began pulling it apart and chewing on the broken parts.

Ms Doidge said: ‘The accused took his mobile phone out and began to destroy it with his bare hands, cutting himself in the process. He was seen putting parts of it into his mouth and chewing them up.

‘The battery was discarded onto a a seat and as a result it began to heat up and began smouldering.’

Cabin crew reacted swiftly to the ‘potential of fire’ on board the plane and ‘scooped the battery up and placed it in a cup of water to cool it down’.

Solicitor Melissa Virtue, defending, said her client had been on a trip to Iceland with his mother to celebrate his birthday but added that he ‘accepted his behaviour [on the plane] was shocking’.

Ms Virtue said Flaherty had committed the offences on the day of his 43rd birthday, he had argued with his mother before the incidents and he had been ‘under the influence of alcohol at the time’.

Flaherty pleaded guilty to conducting himself in a disorderly manner by shouting, swearing, uttering threats and failing to comply with cabin crew instructions on an easyJet flight between Manchester and Keflavik, Iceland, on January 28 last year.

He also admitted to acting in a manner likely to endanger the aircraft by taking apart a mobile phone, placing parts in his mouth, causing damage to the battery whereby it began to smoulder, placing persons on the plane at risk of injury and danger to the safety of the aircraft.

Flaherty also pleaded guilty to a third charge of shouting, swearing, uttering threats of violence and racial remarks at Livingston police station on the same date.