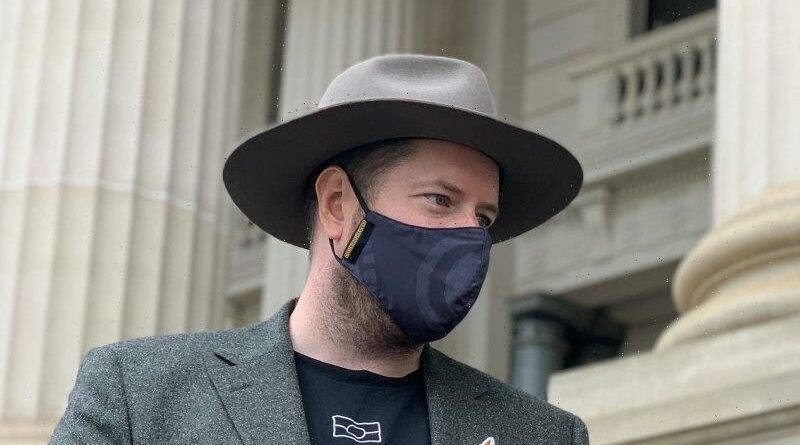 Melbourne City Council and the First Peoples of Victoria are backing a proposal for a multimillion- dollar development in the heart of the CBD that could house the nation’s first “Black Parliament”, become a “keeping place” for repatriated artefacts and serve as a symbol of reconciliation.

The Age has obtained a copy of a draft proposal from the City of Melbourne, forwarded to the First Peoples’ Assembly, that maps out the development and construction of a First Nations cultural precinct that would be “Indigenous led, owned and operated and provide a platform for lifting the Indigenous community.”

The project is estimated to cost more than $400 million and the draft suggests that support for the precinct should be sought from the Victorian government at the development stage, potentially as part of the state’s Treaty process. Partnerships and funding would be sought from the state and federal governments, business, academic institutions and philanthropic organisations.

“It would be financially sustainable after an initial capital and land outlay, and this investment would deliver strong economic and social benefits to the Indigenous community as well as Victoria and Australia,” the proposal states. 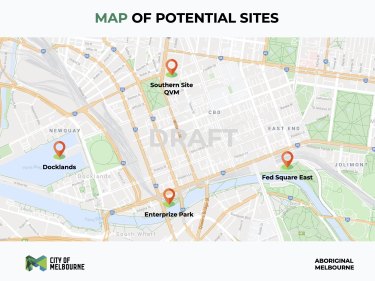 The locations proposed by City of Melbourne for a First Nations Cultural Precinct.

The idea has broad support among First Nations groups and a senior Victorian government source said state involvement in the project was also being considered.

Potential sites being considered include Enterprize Park on the north bank of the Yarra, which was a traditional meeting place for the Wurundjeri peoples; a site near the Queen Victoria Market; Victoria Harbour pier in Docklands; and a site between Federation Square and Batman Avenue that sits adjacent to Birrarung Marr.

The Age revealed last week that the Victorian government is discussing options for a permanent Indigenous voice in the state’s political and legislative framework, which could include a “Black Parliament” or new seats in the regular Parliament.

Plans for an Indigenous voice to the federal Parliament are still being debated, but Prime Minister Scott Morrison has ruled out offering Australians a vote to enshrine an Indigenous Voice into the constitution.

The concept of a cultural centre in Melbourne was raised by First Peoples’ Assembly member and Yaluk-ut Weelam elder Carolyn Briggs in the organisation’s annual report tabled in state Parliament on Thursday.

“It’ll be for theatre, it will be for international Indigenous Peoples around the world to come to, it will be somewhere the Elders will have their place, it’ll be central to Melbourne, it’ll be our own parliament,” Dr Briggs wrote.

“It will be distinctive because it will bring together every element of stories that will be imbedded for our nations to come to a centre for world excellence from an Indigenous perspective.”

The draft proposal includes plans for a First Nations Cultural Centre that would serve as a community hub and “keeping place” for precious items returned to the state’s Indigenous communities. It also suggests including commercial space into the development that could be leased to provide a commercial income stream, similar to the model in place at Federation Square.

The Victorian Traditional Owner Land Justice Group has worked for over a decade on the development of an Indigenous Cultural Centre located in Melbourne’s CBD, including as key partner in a University of Melbourne research project between 2010 and 2014 that involved engaging post-graduate architecture students to produce design concepts for an Indigenous Cultural Centre. 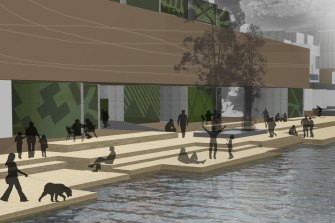 The group’s co-chair Robert Nicholls, a Yorta Yorta, Dja Dja Wurrung, and Wadjabalok man, welcomed the City of Melbourne proposal’s progression of the work done to develop the concept during the collaboration.

“For many decades there have been discussions and solid work around the establishment of a practical multifunctional Cultural Heritage, Research, Education and Economic Development Planetarium Precinct in Naarm (Melbourne) that unites our First Nations. The concept must involve all 38 First Nations who will form the final Assembly or Black Parliament in 2024,” he said.

Similar Indigenous Cultural Centres have been established interstate, notably the Australian Institute of Aboriginal and Torres Strait Islander Studies (AIATSIS) in Canberra and the Uluru-Kata Tjuta Cultural Centre in Central Australia. A National Centre of Indigenous Excellence has been proposed for Sydney’s Barangaroo precinct. First Nations cultural hubs have also been proposed for Adelaide and Alice Springs. 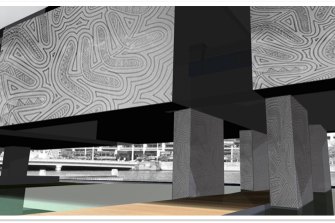 Design Concept by Katelin Butler as part of the Indigenous Placemaking in Central Melbourne: Representations, Practices and Creative Research project.

There is also international precedent in Indigenous cultural centres like the Sami Parliament Building located in Karasjok, Norway; the Te Tonga Tongarewa in Wellington, New Zealand; and the National Museum of the American Indian in Washington D.C.

Lead investigator for the University of Melbourne research project, Janet McGaw, said she was pleased by the council's renewed interest in creating a dedicated place to celebrate First Nations culture and knowledge in inner-city Melbourne, following on from its $60,000 investment as a partner in the 2010-2014 research project.

“The proposal of such a precinct is profoundly significant in the history of urban Australia, marking a new recognition of the centrality of Indigenous culture to our national identity,” she said.

“There are many community members who have campaigned long and hard for it. I’m thrilled their vision might finally be built.” 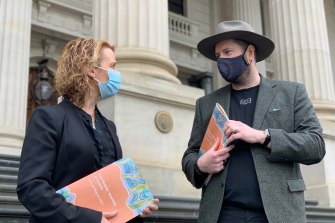 “Obviously culture is core to our very identity, so we’d be very open to any ideas about ways to celebrate, protect and share our cultures. I’m looking forward to hearing more about these ideas.”

A Victorian government spokesperson said it was not at the point in the treaty process to negotiate on specific proposals, but added it had been clear that “nothing is off the table”.

“We have no intention of limiting important conversations within the Aboriginal community about their aspirations and vision for the future,” the spokesperson said.

“Government running a commentary on specific proposals at this stage risks inhibiting discussions that may ultimately help inform the community’s position in treaty negotiations from 2023.”

In a written statement, a spokesperson for the City of Melbourne said the council is committed to advancing its reconciliation journey with First Nations peoples.

“We’re working closely with Traditional Custodians as we plan, celebrate and invest in a shared future,” it said.