Delhi: The Indian government has shut down the internet, deployed troops, imposed a curfew, censored TV broadcasts, shot and killed protesters and banned group assemblies in some states after tens of thousands of people continued to riot against a citizenship bill. 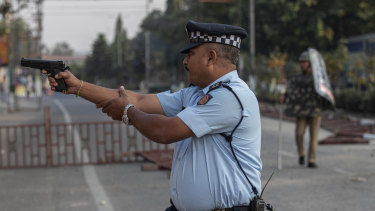 An Indian police officer aims his gun before firing at stone throwing protesters in Gauhati. No one was hurt in that firing.Credit:AP

Protesters caused chaos in three states across India's north-east on Thursday, some defying a government curfew and military deployment to demonstrate against the passage of the contentious Citizenship Amendment Bill, which will grant citizenship to thousands of migrants on religious grounds.

Police shot and killed two protesters in Assam whom they accused of defying a state curfew. Dozens of others were arrested, The Associated Press reported. Assemblies of more than four people were curtailed in neighbouring Meghalaya.

Protesters are angry the bill will grant citizenship to thousands of Hindu, Christian, Jain, Buddhist and Sikh migrants from some neighbouring countries where New Delhi says they are religiously persecuted. Demonstrators say this will flood their hometowns with unwanted foreigners.

The bill will also make it harder for Muslim migrants to attain Indian citizenship, although many Muslims are also discriminated against in neighbouring countries. Critics fear the bill will be used to harass Indian Muslims by forcing them to pass a citizenship test and prove their family's lineage in the country while giving a blanket pass to people of most other religions. 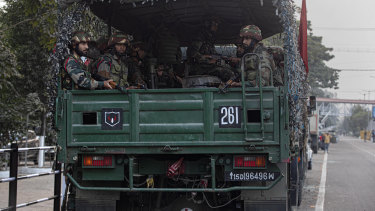 Indian army soldiers in a vehicle get ready for a flag march during a curfew in Gauhati, India.Credit:AP

But government officials say the bill is a humanitarian effort to provide shelter to religiously persecuted minorities. The bill is expected to be signed into law in the coming days.

The protests first broke out on Wednesday, after the controversial bill was passed by the upper house, and quickly turned violent. Protesters set two train stations on fire, clashed with security forces, blocked national highways, burnt vehicles and attacked the home of the highest-ranking government official in Guwahati, the capital of Assam.

The government's show of force only seemed to enrage protesters further, with larger numbers of demonstrators gathering on Thursday and clashing with security forces.

Protesters in the states of Assam, Meghalaya and Tripura say the bill will dilute their numbers by naturalising Hindus from neighbouring Bangladesh who fled to India decades ago, during their country's civil war.

Although the three states are majority Hindu, their residents tend to be more concerned about safeguarding their unique ethnic make-up and linguistic heritage than about helping coreligionists from other countries.

Hiren Gohain, a retired professor in Guwahati, denounced what he called an arbitrary bill by the government that had little public support but only sought to reinforce the government's quest to unravel India's secular underpinnings.

"There had been no demand from any quarter in India for this Citizenship Amendment Bill," Gohain said. The governing party, the Bharatiya Janata Party, or BJP, "has brought the bill to polarise people among communal lines and extinguish the very national existence and culture of Assam," he added. 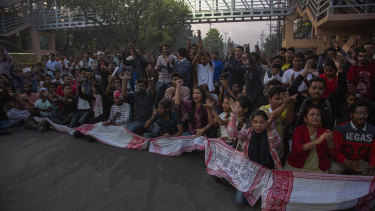 Thousands protested in Assam state against legislation that would grant citizenship to non-Muslims who migrated from neighbouring countries. Credit:AP

The government shutdown of the internet in Assam on Wednesday and Thursday secured India's spot as the country with the most internet blackouts in the world. The world's largest democracy was responsible for 67 per cent of the world's internet shutdowns last year, with 134 incidents, according to Access Now, a digital information advocacy centre.

So far this year, there have been 89 internet blackouts, some lasting months, as in Kashmir, where the internet was shut down for 133 days after the government stripped the majority Muslim territory of its autonomy in August.

The Ministry of Information and Broadcasting directed TV channels to refrain from broadcasting protests or any "anti-national" content, a move critics say is part of government efforts to stamp out opposition. The order came as the live TV station for the upper house of Parliament cut out when opposition lawmakers heckled Home Minister Amit Shah, who is behind the bill.

Earlier this year, Prime Minister Narendra Modi's government tried to push a similar bill, but the legislation stalled after many politicians objected to  its religious dimension and the possibility that many Hindu Bengalis would be made citizens, giving them the right to acquire land.