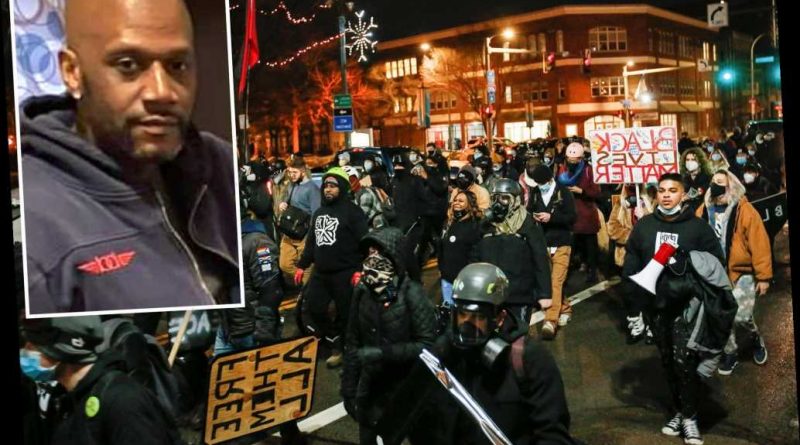 Protesters tear down barricades at Rochester precinct amid arrest outrage

Protesters in upstate New York descended onto Rochester streets late Tuesday to voice their anger over a grand jury’s decision not to indict the Rochester cops involved in Daniel Prude’s death – with one claiming the “system did exactly what it was meant to do.”

Hundreds of demonstrators gathered on the street where Prude, 41, died in March several days following his encounter with police during a mental health episode, the Democrat and Chronicle reported.

Activist Stanley Martin, a City Council candidate, was among the first to address those gathered in downtown Rochester and at the Public Safety Building — the site of two weeks of demonstrations after the release of video in early September that showed seven cops laughing at a naked Prude as he sat handcuffed.

“White supremacy protests white supremacists,” Martin said. “[The system] is not meant to protect us. The system did exactly what it was meant to do.”

Martin continued: “We keep marching; we keep fighting; we keep reimaging what the future looks like. The future does not include RPD and I know that for a fact.”

More than 100 protesters had huddled at the intersection where Prude encountered police by 7:30 p.m. Tuesday, according to the report. The group then marched to the Public Safety Building and chanted at the Civic Center Plaza, where Monroe County Sheriff Office deputies set up barricades that some people had later breached.

No arrests or clashes with officers were reported, according to the Democrat and Chronicle, but demonstrators had reportedly vowed to return.

Attorneys for the seven cops suspended over Prude’s death have said the officers were following their training and insist Prude’s use of PCP was the “root cause” of his death, which was ruled a homicide. During his encounter with cops, the man was placed in a “spit hood” before being shoved into the pavement until he stopped breathing.

The officers will remain on leave pending the outcome of an internal probe, Rochester’s police chief, Cynthia Herriot-Sullivan, has said.

Some activists at Tuesday’s protest, meanwhile, said the fight for justice in Prude’s death is far from finished. The US Justice Department is planning to review the findings of Attorney General Letitia James, whose office took over the investigation, according to a joint statement from its Civil Rights Division, the FBI and the US Attorney for the Western District of New York.

“I don’t think it’s over,” Rochester activist Mike Johnson said. “I don’t think this grand jury decision is the last say in seeking justice for this issue.”