For the past seventy years, slowly and carefully, the nations of the world have been putting together a robust framework of international relations. The key concept has always been emphasising stability and avoiding risk. Now, within a week, Donald Trump's done his best to demolish that entire structure.

Even before the meeting ended Trump was giving media interviews to proclaim it a “remarkable success”. 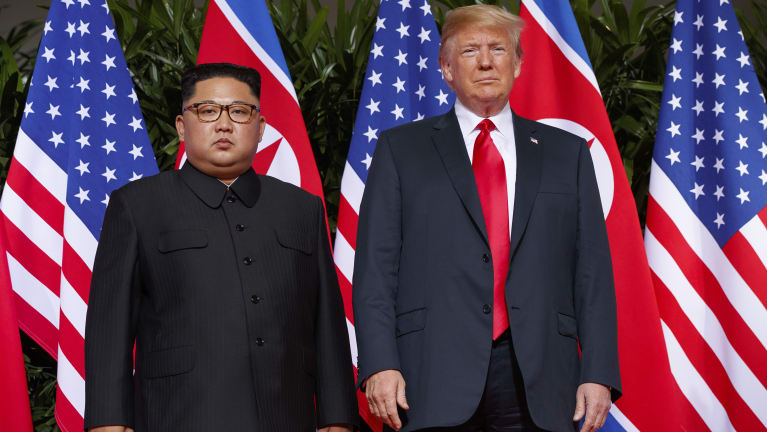 Donald Trump said everyone could “sleep well” now that there is no nuclear threat from North Korea.

The US President had a simple – some would say simplistic – narrative. According to this he went to Singapore, sat down with Kim Jong Un, and obtained an agreement to denuclearise the Korean peninsula, something no other person had been able to achieve since the end of the war.

The other interpretation’s equally easy to understand and equally as plausible. This also credits Trump with the starring role, it’s just that this time the US President becomes the bloke who’s been played for a fool. Working out which of the two scenarios is most accurate will take time, but that’s the one thing Trump’s frittered away.

It was barely six months ago that he was mocking Kim as “little rocket-man” and Kim’s spokeswoman was reciprocating with taunts. Arriving in Singapore early, she immediately began negotiating the terms of the final communique with a former US ambassador to Seoul. But there things stuck. It seemed the North Koreans wanted too much.

So did Trump. The problem is he may have blinked first.

He broke a number of the rules he laid down in his own book, “Trump Style Negotiation”, seemingly because he was desperate to emerge from the talks with a deal. The unresolved issue is if it will actually result in PVID: permanent; verifiable; irreversible; disarmament.

In Canberra yesterday a special symposium at the ANU’s Korea Institute drilled down into the detail that’s emerged from the deal. Professor Shin-wha Lee from Korea University said she attempted to put the most optimistic spin she could on the negotiations, but kept coming back to the lack of detail. She pointed out that – although there’s no timeline – Trump made the remarkable concession that he’d remove US forces from the peninsula, without nutting out the critical detail of verifying North Korean disarmament.

The President's other key promise was to stop military exercises with South Korean forces but, as ANU Professor William Tow pointed out, this has been a vital way of pressuring the North to come to the table.

Current operational doctrine has emphasised striking at Kim’s command and control infrastructure, rather than the bulk of the massive forces. Tow suggested that it may have been concern and awareness of the generals vulnerabilities that induced Pyonyang to the talks in the first place. If the US loses the ability to pressure the North in this way, there’s always the risk Kim will just walk away.

The big question nobody at the conference could answer is if the overblown rhetoric emanating from the Singapore meeting will be matched by concrete deeds. This question has major ramifications for the broader conduct of international diplomacy.

If the deal is rapidly exposed as simply a device intended to make Trump look good domestically, the diplomats fear he will have simply emboldened a rogue regime – one armed with nuclear weapons. But if, on the other hand, the deal does hang together, it will demonstrate that the current diplomatic framework for dealing with such negotiations is obsolete.

The United States has always (until now) refused to sit down and talk to Kim. Barack Obama – the Nobel Peace Prize winning President – failed to find any way to reopen negotiations with the North. It only took Trump a matter of weeks to overthrow all the old rules of diplomacy and emerge (according to him, anyway) triumphant with promises to de-nuclearise the peninsula and remove it from a current hair-trigger to war.

Australia has a lot to lose if the current system is overthrown.

The United States has proved to be a benevolent hedgemon as its police the world order. Our prosperity and autonomy have been guaranteed at a low cost. Today, however, that old way of doing things is under increasing challenge. This was a theme taken up by Defence Minister Marise Payne in a speech to the Australian Strategic Policy Institute on Thursday night.

Without mentioning China by name, she stressed how the “rules-based order” is coming under increasing threat and extolled Australia’s need to work closely with allies, especially the so-called “five-eyes network” (Australia, Canada, New Zealand, the UK and the US).

Payne didn’t bother holding out any branches, or refer once to our most vital defence partner, Indonesia. It was an old-fashioned speech stressing the need to respond vigorously to any threats.

That’s good and necessary. It’s also the sort of speech that works politically. It’s not, however, designed to offer any new insights of different ways of resolving problems.

It remains to be seen which method will manage to achieve a positive future. The old ways have kept the world stable, but divided into armed camps. Trump’s moves have added a new fluidity to a sclerotic system. Most analysts don’t like the challenge to their way of doing business this represents.