NEW DELHI: The lawyer arguing for runaway driver Puneet Puneet not to be extradited to Australia surprised an Indian court judge when he claimed that Australian High Commission officials were "hassling" staff at the medical institute responsible for assessing whether Puneet is medically fit to be extradited.

"Embassy officials have told everyone at the hospital that [Puneet] is wanted for extradition," said Puneet’s counsel Kanhaiya Kumar Singhal.

"Everyone knows — doctors and patients. They keep hassling everyone for information about their assessment. They should be told to stop this."

Justice Gurmohina Kaur said she did not want anyone "making allegations" and "distorting the facts".

Australia has been seeking hit-and-run Indian driver Puneet’s extradition ever since he fled to India using a friend’s passport in 2009. 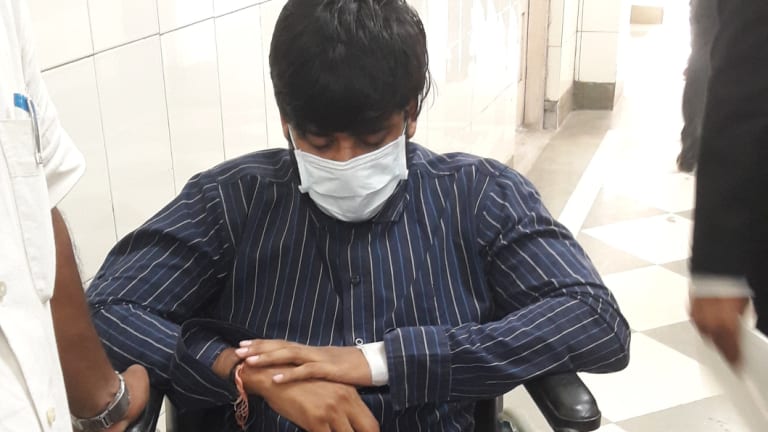 Puneet Puneet at a court appearance in September.Credit:Amrit Dhillon

A medical representative from the Institute of Human Behaviour and Applied Sciences in New Delhi, where doctors have been examining Puneet intermittently, denied that Australian embassy officials had been bothering its staff.

"If people know that he is the subject of an extradition case, it is because other patients have asked Puneet’s relatives, that’s all," Dr Om Parvesh told the court.

The judge told Singhal to not "distort" the  matter, adding that "the basic crux of the case is getting out of hand".

Singhal also claimed Puneet had been admitted into the "jail section" of the institute, but Dr Parvesh told the judge that "there is no jail section in the hospital".

During Saturday's hearing in the much-delayed case, the court also heard that Puneet's medical assessment has still not been completed two months after Justice Kaur ordered it.

Justice Kaur had agreed in August to Puneet’s request for a medical examination by a panel of doctors to assess his psychiatric condition as long the assessment was expedited.

Singhal has variously claimed that his client was both schizophrenic and suicidal and suffered from a range of physical ailments.

Dr Parvesh told the court that the institute had admitted Puneet for five days, but he had discharged himself before the evaluation was finished.

The doctors had wanted Puneet to come on alternate days as an out-patient but he had done so only twice.

"We needed more time to follow up on some observations we had made, but it wasn’t possible. He refused to be admitted,’’ said Dr Parvesh.

The prosecution, referring to the ongoing delays, urged the judge not to wait any longer for the medical report and proceed with the case.

But Justice Kaur said she had "started something [agreeing to the psychiatric assessment] and now I have to finish it … I am at least giving you hearing dates with as short a gap as possible."

The hearing ended with Justice Kaur ordering Puneet admit himself to the institute on Monday for 10 days to allow psychiatrists to complete their evaluation.

Puneet appeared in court with two uncles and looked dishevelled.

Puneet fled to India to avoid being sentenced in Australia for the 2008 death of Queensland student Dean Hofstee in Melbourne.

Puneet was a 19-year-old learner driver when he killed Hofstee and also seriously injured Clancy Coker in the same crash.

Puneet was on bail and awaiting sentence after pleading guilty to culpable driving when he fled Australia in 2009 using a friend’s passport.

He was arrested four years later in India, on his wedding day, and has been fighting against extradition since.

The next hearing is on October 23.