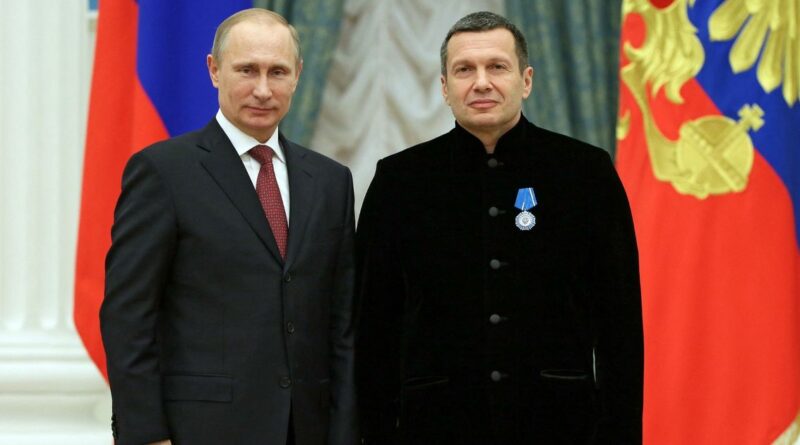 An ally of Vladimir Putin and host on Russian state TV has called for a "nuclear strike" of NATO countries who he believes have now entered "into the war with Russia".

The post appeared on Telegram and was actually originally written by political analyst Alexander Sosnowski on August 11.

Sosnowski launched a furious anti-European rant after Finland and Estonia, both European Union members, called for other European countries to stop issuing tourist visas to Russians last week amid the ongoing invasion of Ukraine.

READ MORE: Putin vows to give Russian mums one-off £13.5k payment if they have 10 children

TV host Vladimir Solovyov has reportedly had Sosnowski on his show in the past and shared his comments in support.

The post read: "The refusal to issue visas to Russian citizens and the declaration of the Russian Federation as an accomplice of terrorism puts an end to relations with Europe.

"This means the actual entry into the war with Russia. Severing ties, supplying weapons is direct participation in the war. Moreover, in a war with really superior forces, given the number and armament of NATO countries.

"This is a real threat to the existence of Russia and may lead to the use of the doctrine of a preventive nuclear strike."

The US State Department has previously identified Solovyov as a face of Kremlin propaganda, according to Newsweek.

His support for these comments is just the latest example of Russian state TV and commentators calling for an escalation of war.

Earlier this month Yury Kot, the leader of pro-Kremlin Ukrainian movement Parus, appeared on Russia's Channel One accusing Kyiv of risking nuclear safety at the Zaporizhzhia nuclear power plant and calling for action against the West.

He said: "We all understand very well that Ukraine and the West are concocting a fictional reality over Zaporizhzhia nuclear power plant.

"We are dealing with the reality.

"We need to tell Ukraine and its supporting countries – Britain and America foremost…and make it clear.

"If Zaporizhzhia nuclear plant is damaged and a disaster occurs, two missiles will immediately strike your decision-making centres.

"One in Washington, the other in London – nuclear ones. And that’s it, there won't be any more talk."