Vladimir Putin claims Russia has a coronavirus vaccine and says one of his daughters has already been injected – prompting widespread scepticism because the jab has not yet passed clinical trials.

The Russian leader announced today that Russia had become the first country to register a vaccine, claiming it has ‘passed all the necessary tests’ and offers two years of immunity against the disease.

Putin, 67, said one of his daughters had already developed antibodies against Covid-19 and said her side-effects were no worse than a high temperature.

Governments and scientists around the world are desperate for an effective vaccine, which is seen as the only certain way of bringing the pandemic to a standstill.

However, experts have already sounded the alarm about the safety of Putin’s vaccine because the usually months-long Phase III trials have not yet taken place.

The Kremlin and its state-controlled media have touted Russian scientists as global pioneers and turned the vaccine race into a matter of national prestige, leading to fears that safety could be compromised for the sake of Russia’s image.

One UK scientist said today that there was ‘no data’ on Russia’s vaccine and warned that any jab must have the confidence of the general public to be successful. 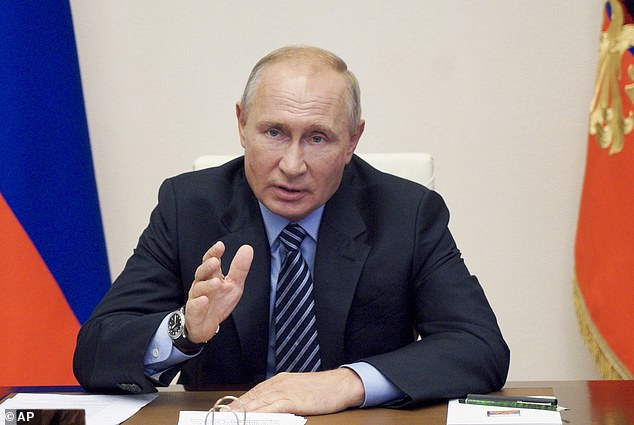 Speaking at a government meeting today, Putin claimed that the vaccine has undergone proper testing and proven safe to use.

‘I would like to repeat that it has passed all the necessary tests,’ he said. ‘The most important thing is to ensure full safety of using the vaccine and its efficiency.’

The Russian leader added that one of his two daughters has received two shots of the vaccine and is feeling well. ‘She has taken part in the experiment,’ Putin said.

Putin said his daughter had a temperature of 100F (38C) on the day of the first vaccine injection, which then dropped to 99F (37C) on the following day.

After the second shot she again had a slight increase in temperature, but then it was all over, Putin said.

He did not reveal whether it was his daughter Maria or Katerina who received the vaccine.

Russian authorities have said that medical workers, teachers and other risk groups will be the first to be inoculated.

Deputy Prime Minister Tatyana Golikova said that the vaccination of doctors could start as early as this month.

The Health Ministry said in Tuesday’s statement that the vaccine is expected to provide immunity from the coronavirus for up to two years.

Russia previously said that the critical Phase III trials were not due to begin until this month.

However, becoming the first country in the world to develop a vaccine has been a matter of national prestige for the Kremlin as it tries to assert the image of Russia as a global power.

Professor Alexander Gintsburg, head of the Gamaleya institute that developed the vaccine, raised eyebrows in May when he said that he and other researchers had already tried the vaccine on themselves.

Human studies started on June 17 among 76 volunteers, including from the Russian military – while the U.S., Britain and Canada last month accused Russia of using hackers to steal vaccine research from Western labs.

As the trials were declared completed, questions arose about the vaccine’s safety and effectiveness.

Some experts scoffed at Russian authorities’ assurances that the vaccine drug produced the desired immune response and caused no significant side effects, pointing out that such claims need to be backed by published scientific data.

The World Health Organization said all vaccine candidates should go through full stages of testing before being rolled out.

Experts warn that vaccines s that are not properly tested can cause harm in many ways – from a negative impact on health to creating a false sense of security or undermining trust in vaccinations.

The WHO last week urged Russia to follow established guidelines and go ‘through all the stages’ necessary to develop a safe vaccine.

Russia itself has suffered nearly 900,000 cases of the disease – the fourth-most in the world behind the US, Brazil and India – and more than 15,000 deaths.

However, the infection rate has been gradually falling for months and Putin has touted Russia’s response to the pandemic as superior to America’s. 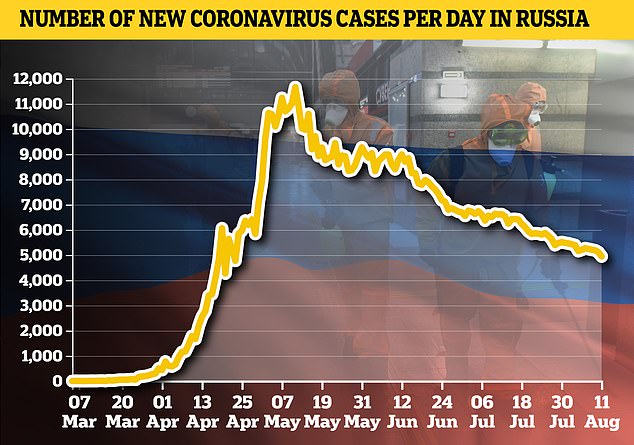 Russia has suffered nearly 900,000 coronavirus cases, but the daily infection rate has been slowly falling for several months 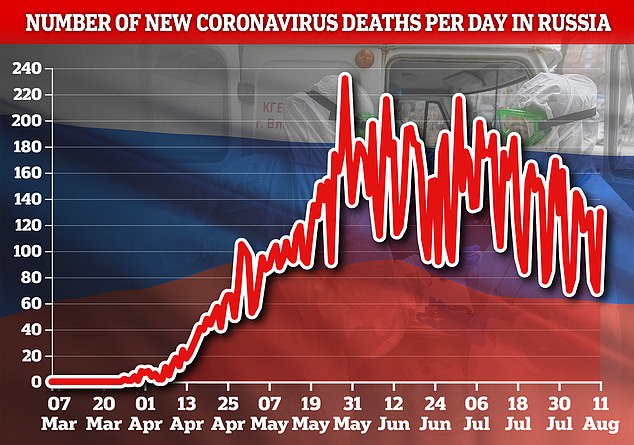 Russia has suffered 15,131 deaths in the pandemic and frequently sees more than 100 new fatalities per day

Dr Michael Head, Senior Research Fellow in Global Health at the University of Southampton, said: ‘It is unclear precisely what is actually happening with the Russian vaccine.

‘It is vital that any vaccine roll-out has the confidence of the general public, and that there is good communication of the level of effectiveness and any likely side effects.

‘At this point in time, there is no data on the Russian-led vaccine for the global health community to scrutinise.

‘There have been lessons learned from previous vaccine roll-outs, that were usurped by anti-vaccination activists and population health has greatly suffered.

‘Examples include the HPV vaccine in Denmark or Japan, where uptake plunged after anti-vaccine campaigns and irresponsible comments from some scientists.

‘Health promotion and clear explanations to the general public are the bare minimum in terms of communications here.’

Professor Duncan Matthews, Professor of IP Law at Queen Mary University of London said: ‘News of a potential Covid-19 vaccine is to be welcomed but safety must be the priority.

‘The U.S. Food and Drug Administration (FDA) and the European Medicines Agency (EMA) have fast-track approval procedures for emergency humanitarian use and we need to see evidence that Russia is adopting an equally prudent approach.’

Regulators around the world have insisted that the rush to develop COVID-19 vaccines will not compromise safety.

More than 100 possible vaccines are being developed around the world and at least four are in final Phase III human trials, according to WHO data.

One of these is being developed by China’s Sinopharm and another by AstraZeneca and the University of Oxford.

Producers are also grappling with the question of how to massively scale up production to meet global needs.