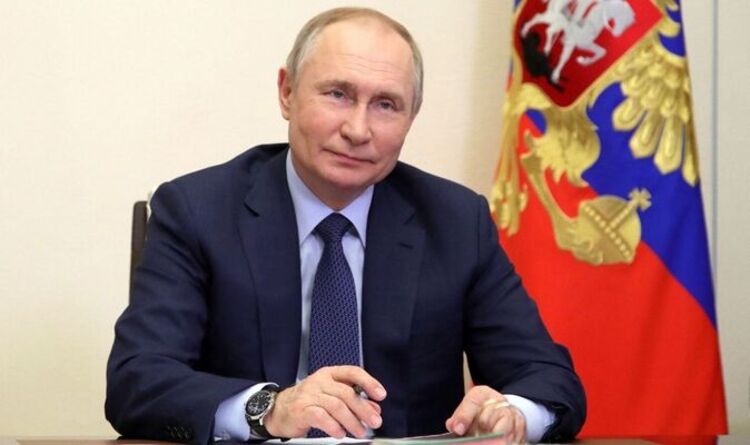 Ukrainian President Volodymyr Zelensky said he was prepared to discuss a neutrality policy as peace talks resume on Monday in Istanbul. The news came as many regions of Ukraine continued to face relentless attacks from Russian forces. The cities of Kyiv, Lutsk, Kharkiv and Zhytomyr all witnessed powerful explosions on Sunday. The UN estimates that almost four million people have fled Ukraine since February 24, with more than half of those heading to neighbouring Poland.

Other countries are also facing an unexpected influx of migration as Russians flee their own country to set up shop elsewhere.

Russia’s highly trained and highly skilled are deserting Putin’s regime for new countries, mainly in southeast Asia, eastern Europe and the US.

Security expert Dr David Blagden told Express.co.uk that this brain drain, alongside Western sanctions, will dramatically reverse the progress made by Russia since the late Nineties.

Dr Blagden, a senior lecturer in international security at the University of Exeter, said: “Russia is bearing huge costs at home, and those costs will only grow the longer the war goes on.

“A lot of Russia’s best and brightest are fleeing overseas.”

Konstantin Sonin, a Russian economist, estimated earlier this month that as many as 200,000 Russians had fled their country in the first two weeks after Putin’s troops invaded.

In losing its brightest workers, Russia’s economy will lose its economy of taxpayers and wealth-creating entrepreneurs.

Madina Khrustaleva, a Russia analyst at TS Lombard, told The Telegraph last week that the brain drain could reach similar levels to those seen in the aftermath of the collapse of the Soviet Union in the late Nineties.

She estimated that some 500,000 “highly qualified professionals”, including herself, had left Russia since 2014.

She said: “The Government is trying to help IT companies and to prevent youngsters from leaving the country.

“But that’s going to be almost impossible, taking into account what the economy will be able to offer them in the next 10 years… If you are able to leave, you will leave.”

Swathes of iconic Western brands have suspended operations in Russia in recent weeks, with McDonalds, Coca Cola and Louis Vuitton among the household names to temporarily pause their business activities.

Likewise, at least 33 foreign airlines have stopped flying to Russia, and Russian planes are forbidden from entering the airspace of most European countries.

Any objection to Putin’s regime is extremely unlikely to come from street level, as anyone expressing support for Ukraine could face a jail sentence of up to 20 years under a new “state betrayal” law.

Jonathan Jackson, a senior teaching fellow in policing and security at Birmingham City University, told Express.co.uk earlier this month that public support, or discontent, for Putin’s regime is “difficult to ascertain” due to the strict media control within Russia.

He said: “What will be clear to many living in Russian major cities, will be the lack of western stores and the soaring prices of consumer products.

“The rubble is rapidly losing its value, forcing many to raise their prices.

“The absence of participation of Russia at sporting events is a clear sign to many that the state is becoming increasingly isolated from global activities.

“Having said that, the state remains firmly in-control and with heavy custodial sentences for those who speak out, it is unlikely that resistance will begin at street level.

“The information war will be as important as the physical one, and it is vital that western media outlets continue to provide an alternative reality to that being pumped out by Moscow.”

Even before Putin’s invasion, young Russians were considering leaving amid a stagnating economic situation.

A survey by the independent Levada Centre last year found that 48 percent of those aged between 18 and 24 said they would like to move abroad permanently.

Likewise, a tenth of those surveyed were already taking steps to emigrate.