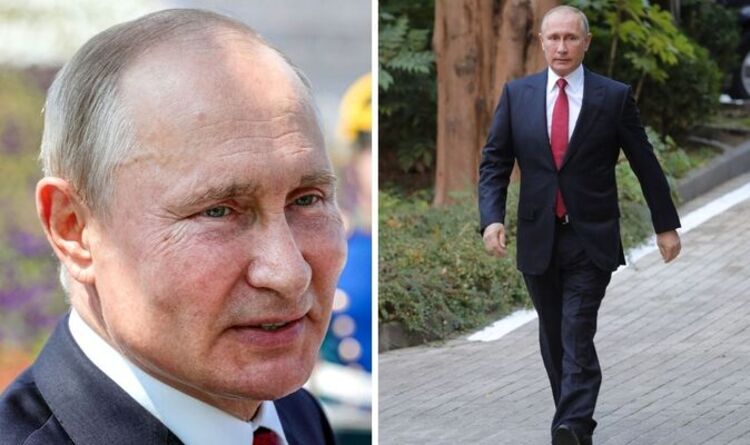 On Wednesday the Kremlin said that Putin’s mental state is “normal” amid speculation that the Russian President may be ill or suffering from an addiction to steroids. Critics have claimed that Putin appears bloated, irrational and out of control, citing the Presidents absurd outburst that the Ukraninan leadership are “nazis” and “drug takers” as evidance. Former US director of national intelligence, Jim Clapper said that Putin was “unhinged” having isolated in Moscow for months because of coronavirus paranoia.

Meanwhile, Condoleezza Rice, the former US Secretary of State, said that the Russian leader looked “different”, adding: “He was always calculating and cold, but this is different.

Republican Senator Marco Rubio has also claimed that Putin appears to be suffering from “neuro-psycholgical” issues.

The President’s increasingly unpredictable behaviour and bloated appearance have sparked claims that the he may be suffering from cancer, a brain tumour, or steroid addiction.

Yet speculation surrounding Putin’s health has plagued the President for the past decade.

In 2015 experts noted that the Russian leader was suffering from “gunslinger’s gait”, which is a consistently reduced right sided arm swing.

The gait is usually considered an early sign of Parkinson’s disease, yet movement disorder experts claim that the stance may also be related to the Russian President’s KGB background.

“For movement disorders experts such as ourselves, the first, and admittedly biassed,  diagnosis that comes to mind is Parkinson’s disease, in which an asymmetrically reduced arm swing is a distinct feature.

“In fact it can be the earliest presenting sign of Parkinson’s disease, as was demonstrated by video reviews of football games played by the legendary English midfielder Ray Kennedy.

“Only later this proved to be the presenting sign of his Parkinson’s disease.”

However the team of experts sought explanations other than Parkinson’s, and came across a former KGB training manual that gave instructions on how operatives should move in the field.

The manual said: “When moving, it is absolutely necessary to keep your weapon against the chest or in the right hand.

“Moving forward should be done with one side, usually the left, turned somewhat in the direction of movement.”

Considering Putin’s KGB training in the Seventies, the researchers wondered whether this could be the explanation for the President’s gait.

The researchers wrote: “We feel there is another ‒ and perhaps more plausible ‒ explanation, namely a behavioural adaptation resulting from military or intelligence training.”

They found a number of examples of reduced arm swing among those who had weaponry training, including Wild West cowboys.

The researchers continued: “We propose that this pattern, which we term ‘gunslinger’s gait’ may result from a behavioural adaptation, possibly triggered by KGB or other forms of weaponry training where trainees are taught to keep their right hand close to the chest while walking.

“[This allows] them to quickly draw a gun when faced with a foe.”