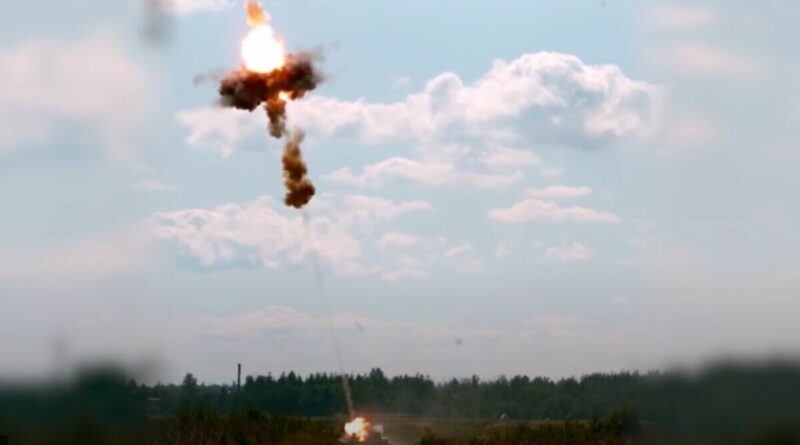 A PTKM-1R top-attack mine was first discovered on Ukrainian soil on April 26, according to an online munitions database. Though known to have existed before the war in Ukraine, it is the first time the weapon has been recorded as being deployed operationally.

The advanced anti-tank weapon uses sensors to locate its target, before launching an explosive projectile.

This part of tanks and armoured vehicles are their “Achilles’ heel”, the military technology intermediary claims, which the PTKM-1R designed to attack.

Whereas other mines typically explode from underneath a vehicle passing over it, this top-attack mine can be positioned as far as 50 metres away from the target.

ROE says: “The PTKM-1R is capable of selecting what armoured vehicle to hit, it chooses only those equipment [sic] that meet the specified parameters in terms of noise and ground vibration.”

The launcher is equipped with “acoustic and seismic sensors”, while the projectile has “infrared and radar sensors” to find its target, according to ROE.

It adds: “When the target comes within 50m radius from the mine, the seismic sensor commands to launch the combat element.

“When the sensors detect the target the warhead is detonated and strikes the target from above.”

The PTKM-1R packs 2.8kg of explosives, and is capable of penetrating armour by up to 7cm, its specifications say.

It is believed the “smart” weapon is designed to be able to distinguish between civilian and military vehicles.

According to the Telegraph, the top-attack mine was first introduced into service by the Russian army in 2020.

It is similar to the American M-93 “Hornet” mine, which is recorded by various sources as having a reach of 100 metres.

ROE suggested the weapon had been developed in response to a modern arms race in recent years, which has seen military vehicles mobilised with greater armour.

The British Army brought in “cutting edge” armoured vehicles following the invasion of Afghanistan, including the blast-resistant Foxhound, as conventional military vehicles were susceptible to landmines planted by the Taliban.

This included the Foxhound, a blast-resistant patrol vehicle designed with a v-shaped underbelly to deflect explosions.

However, if an explosive device is able to enter the vehicle via the roof, it can cause the munitions inside to explode, or prevent the vehicle from operating.

The PTKM-1R is said to be able to detect vehicles within a 100 metre range, tilting the launcher towards the target.

It launches when the sensor readings suggest the vehicle is within 50 metres, and a few seconds later, at a height of around 30 metres, the explosive is powered towards the top of the target.

It is as-yet unclear whether any Ukrainian tanks have so far been destroyed by the new weapon.