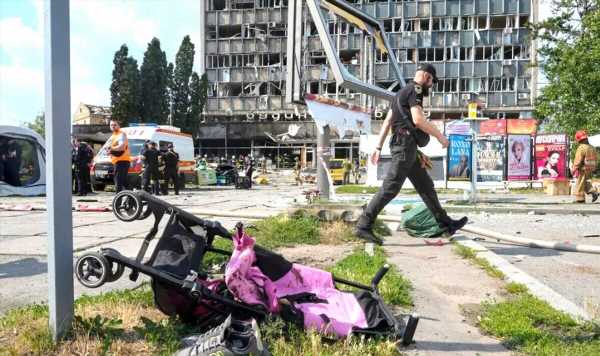 A one-year-old girl has become the latest child to be injured as a result of Russia’s invasion of Ukraine after a missile struck her village in the Zaporizhzhya region. The little girl, whose identity has been protected, was one of two people injured by Russian shelling in the village of Novosofiivka on Monday, while two people were also killed. Images of the attack show the homes of some of the villagers blown to pieces as further reports concerning the extent of the damage continue to be published. The Ukrainian Prosecutor General’s Office announced on Tuesday morning that 443 children have been killed since February 24 as a result of ongoing strikes.

Kyrylo Tymoshenko, the Deputy Head of Ukraine’s Presidential Office, reported that Russian forces had destroyed several houses in the village of Novosofiivka.

He said: “Zaporizhzhya Region, Novosofiivka village. Several private houses are destroyed, civilians are injured. The State Emergency Service officers and paramedics are working at the scene of attack.

He later added that “two people were killed, and two more persons were injured in the strike. More detailed information will be provided later”.

The Head of the State Regional Administration, Oleksandr Starukh, confirmed the death toll figures while urging citizens to remain indoors over a “high risk of repeated missile strikes”.

Russian strikes purportedly against energy infrastructures in Ukraine have killed thousands of civilians over the past nine months.

In places outside of Russian occupation, the Prosecutor’s General’s Office (PGO) confirmed 443 children had been among those killed in the attacks, according to the official information of juvenile prosecutors.

And they suggested that figure was considerably higher as it did not include the hundreds of thousands of people in active hostilities at the moment, with whom it is difficult to establish contact.

The PGO said the “most affected children were in Donetsk oblast”, which has been afflicted by heavy fighting for almost the entire war, with 424 children injured or killed.

Elsewhere, they said Kharkiv in the northeast had been severely affected, as had the capital of Kyiv, which though it has never been occupied by Russian forces, has been continually bombed by Putin.

Russian shelling has also damaged 2,719 educational institutions, including nurseries, destroying in their entirety 332 of them.

Footage last week showed a kindergarten near Bakhmut, a small city currently trapped in the heart of the fighting right on the frontline, burning to the ground after Russian strikes.

The exact figures of those killed and schools destroyed is expected to be considerably higher as more cities are liberated from Russian occupation.

Ukrainian children have been among the victims of some of the conflict’s most horrific massacres, including a Russian missile strike on a railway platform in the city of Kramatorsk in Donetsk region in April, which killed more than 50 people.

Four-year-old Liza Dmytriyeva, a young Ukrainian girl with Down syndrome, was also killed after suffering shrapnel wounds in July following the bombing of a shopping mall in the city of Vinnytsia in central Ukraine

Photos of her pink and black stroller lying in the street were shared across the world.

Meanwhile, Russian losses in Ukraine are closing in on 100,000 deaths, with more than 275,000 wounded, according to an approximate assessment of the Armed Forces of Ukraine.

READ NEXT: Russia uses chemical weapons against Ukrainian soldiers
North Ukraine troops prepare ‘hellish reception’ for Belarus invaders
Horror as Russian-made rocket lands in neighbouring nation
‘Putin’s not mad he has his own logic and is playing us for fools’
Ukraine triggers ‘large scale air warning’ for hundreds of missiles