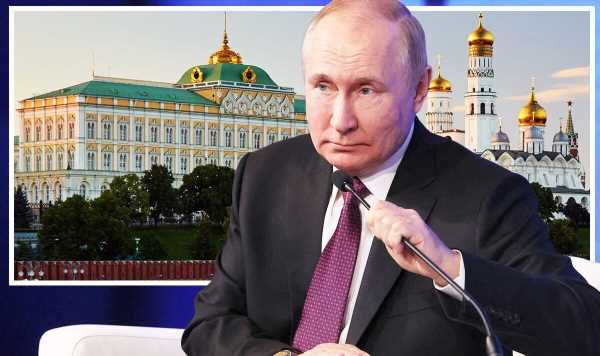 The Kremlin is one of the most secretive places on earth. No one knows for sure what is motivating Vladimir Putin and the invasion of Ukraine. It is also unclear whether anyone working closely with Putin is willing to defy the orthodoxy in Moscow and challenge him on the war.

If US intelligence is accurate, it appears there could be division inside the Kremlin. A source familiar with Washington’s briefings recently said: “It’s a real-life ‘House of Cards,’ but in the Kremlin. All stabbing each other in the back.”

The claims were reported by CNN. The source said that a mysterious figure called Yevgeny Prigozhin stood up to Putin and criticised the Russian military’s failings. He founded the Wagner Group, a private mercenary group that the Russian government uses to help with military operations.

Ukraine is no different. The Wagner Group has been accused of being involved in the war crimes committed in the country. Prigozhin has always denied having links to the Kremlin, but he has previously been described as “Putin’s chef” after his catering company provided food for rulers in Moscow.

Kremlin spokesman Dimitry Peskov even denied these claims, telling CNN: “This information is fundamentally incorrect. President Putin holds meetings about the special military operation on a regular basis and all participants express different point of view in working mode.”

But Russia expert, Michael Kofman, believes Prigozhin “sees an opportunity to move up in station and wants to “embarrass” Russian defence minister Sergei Shoigu ” in the hopes of advancing himself”.

Meanwhile, the US security source points to other issues which could end up hurting Putin’s regime. Mobilisation has angered many in Russia as their loved ones are sent to risk their lives. On the other side, there are ultra-nationalist figures who want Putin to escalate the violence further, even towards a nuclear strike.

They added: “The Kremlin is walking on a tightrope. Mobilisation is widely unpopular in Russia and all talk about ongoing and additional mobilization is prohibited in the controlled information space. Several senior officials would like the war to end because Putin’s ambitions are considered unrealistic. Same with many oligarchs.

“At the same time, you have people like Prigozhin, [Chechen leader Ramzan] Kadyrov and certain influential military bloggers who want Moscow to go ‘all in.’”

Frustration at the lack of progress made by Russia in Ukraine is also apparent in the Russian media. State TV is usually supportive of the Russian government, and while the broadcasters are still reluctant to question Putin, the Russian military is coming under increasing scrutiny.

Last month, leading Russian journalist Alexander Sladkov reported on the losses Russia has suffered in the Donbas region. He said that “the situation is difficult. Ukraine’s armed forces are at the peak of their capabilities due to their mobilisation they started in spring.”

Alexander Kots, a reporter for the for pro-Kremlin newspaper Komsomolskaya Pravda, added: “The Russian troops do not have enough manpower to stop the enemy attacks. The recent Russian losses are directly connected to that. It’s a very difficult period of time on the front line at the moment.”

He added that Ukrainian forces are “on the high and enjoying a numeric advantage”.

Mr Kots continued: “They don’t have problems with the intelligence data or high-precision weapons which they are constantly using. We are just waiting for our reserves to become fighting fit and join the battle.”