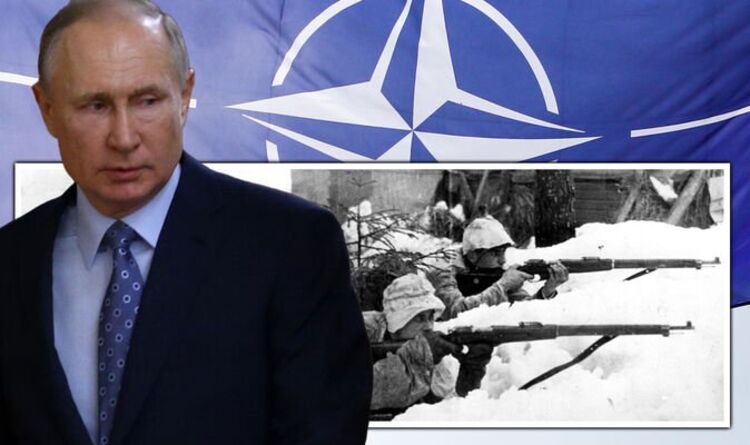 Finland has a 'sizeable majority' in favour of joining NATO

Prior to Russia launching a full-scale invasion of Ukraine its President Vladimir Putin had regularly attacked the North Atlantic Treaty Organisation (NATO). Mr Putin issued a list of demands to western leaders stipulating that the military alliance must limit its movements within eastern Europe. The Kremlin claims that NATO poses a threat to Russia’s national security interests and has threatened other countries against signing up.

Finland is currently part of a number of countries in Europe who are not members of NATO.

As it shares a border with Moscow, Finland has historically been cautious of angering its neighbour and remained neutral on a number of different issues.

However, the Russian invasion of Ukraine on February 24 has started to turn the public’s will for Finland to join NATO.

A poll which has recently been published indicates that the majority of Finns (53 percent) now support membership with the alliance.

She said: “Finland and Sweden should not base their security on damaging the security of other countries and their accession to NATO can have detrimental consequences and face some military and political consequences.

The department said: “We regard the Finnish Government’s commitment to a military non-alignment policy as an important factor in ensuring security and stability in northern Europe.

“Finland’s accession to NATO would have serious military and political repercussions.”

When did Russia invade Finland before?

The ‘Winter War’ between 1939 and 1940, also known as the Russo-Finnish War, saw the tiny Finnish military take on the might of the Soviet Union’s gigantic Red Army.

A mistrust between the two countries triggered the conflict. Finland believed the Soviet Union wanted to expand into its territory and the Soviet Union feared Finland would allow itself to be used as a base from which enemies could attack.

Finland declared itself neutral at the start of World War Two, but the Soviet Union demanded concessions which Finland delayed handing over.

A faked border incident gave the Soviet Union the excuse to invade on November 30, 1939, however they initially struggled to overcome their much smaller enemy.

The Finns resisted for three months before their army was exhausted and defensive lines eventually overrun.

On March 12, 1940 Finland was forced to sign the Treaty of Moscow which ceded 11 percent of its territory to the Soviet Union.

Although they requested assistance from Sweden and a number of western allies, during the war, help never came to Finland.

NATO was formed by a group of countries – including the UK, US and France – in 1949, following the conclusion of World War Two.

Today it boasts 30 members from across the North Atlantic, who are required to come to each other’s aid in the event that a member state is attacked.

Several nations, such as Estonia, Latvia and Lithuania, who were once part of the Soviet Union now make up the NATO alliance.