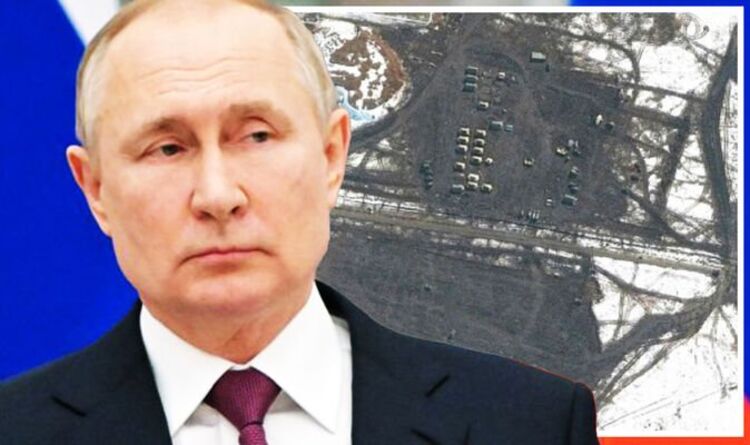 Ukraine and Russia called for intensified diplomatic efforts on February 20 to avert all-out war, each blaming the other for a sharp escalation in shelling on the front line separating Kiev’s forces from Moscow-backed separatists.

Images released on Sunday show a huge deployment of Russian troops as the world is on brink over a potential invasion of Ukraine.

A video shared on Twitter shows a terrifying formation of the Russian military.

Tensions between Russia and Ukraine have reached boiling point over recent months.

In September, Ukrainian President Volodymyr Zelenskiy warned an all-out war with Russia could be a “possibility”. Since 2014, more than 14,000 people have been killed in the conflict in eastern Ukraine.

Over the weekend, around 200 military vehicles were spotted in Shebekino, Russia, near Ukraine’s Kharkiv Oblast.

Thousands of civilians have been evacuated after explosions shook eastern Ukraine on Saturday night.

Kiev confirmed two of its soldiers had died in the attack marking the first fatalities in the conflict for more than a month.

Mr Zelenskyy called on his Russian counterpart to meet him for talks amid the escalating crisis.

He said: “I don’t know what the president of the Russian Federation wants but that Ukraine would continue to follow only the diplomatic path.”

Last week, concerns of a war between Moscow and Kiev were raised after Russian units left their assembly areas.

Some long-range artillery and rocket launchers have also been moved into firing positions.

The official said that satellite images showed the troops movements.

This comes as Mr Biden and NATO allies warned any Russian invasion of Ukraine would bring “swift and severe costs”.

Russia has denied planning to invade Ukraine but has tens of thousands of troops near its neighbour’s borders.

US officials believe Russia could launch an invasion of Ukraine this week, though there remains some hope that a diplomatic solution could be reached.

Russia has surrounded Ukraine on three sides, with more than 100,000 troops amassed at the border, but has always denied that an invasion is planned.

After World War 2, the western part of Ukraine merged with the Ukrainian Soviet Socialist Republic, making the whole country a part of the Soviet Union.

It regained its independence in 1991 with the collapse of the Soviet Union.

Many Russians, including Mr Putin and other figures within the Kremlin, still consider Ukraine a part of Russia.