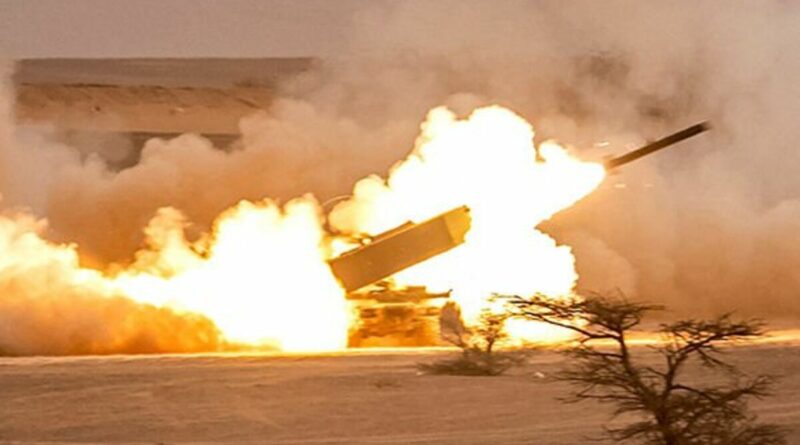 Russia is reeling in the face of a relentless onslaught by Ukrainian troops armed with Western weapons including the HIMARS missile system, a Russian television host has admitted in an unusually candid assessment of the situation. The broadcaster was responding to a fiery diatribe by Pyotr Tolstoy, a member of the Russian government’s State Duma chamber, who claimed Russia was ready to “burn Europeans with napalm”, an ally of President Vladimir Putin has claimed in a fiery diatribe on state-controlled television.

However, the host of the programme pushed back in an unusual acknowledgement of his country’s vulnerability, saying: “Let’s be honest and straight with ourselves.

“We joked for a long time about the Ukrainian army but many no longer think it is a joking matter.

“We were joking about American weapons but let me tell you, after getting to know HIMARS, and 155mph projectiles up close and personal, it’s not very funny anymore when we see how they dismantle our warehouses and command centres with precision.”

The frank exchange was shared today by journalist Julia Davis, creator of the Russian Media Monitor.

Tolstoy launches into his rant as he discusses his country’s attempts to conquer Ukraine, almost 10 months after Putin ordered his invasion on February 24.

He claims Western leaders such as French President Emmanuel Macron will be consigned to the “dustbin of history”, adding: “I couldn’t care less what happens to Macron.

As far as Macron, Merkel, the Poles, the Balts, they aren’t important to me at all.”

Pressed about the supply to Ukraine of “German Leopards” and “French Howitzers”, Tolstoy adds: “We make excellent missiles.

“We will burn European humanitarians with napalm along with their weapons on the territory of Ukraine.”

Spokeswoman Maria Zakharova branded the EU’s ninth batch of sanctions in response to the war “illegitimate unilateral restrictive measures” and lashed out at a ban on broadcasts by four major Russian TV channels as “authoritarian”.

In allowing EU member states to “provide certain exemptions” for Russian food and fertiliser exporters, Zakharova contended that the EU was recognising that its “restrictive measures have been undermining world food security.”

Targets of the latest round of sanctions include divisions of the Russian army and all of Russia’s parliamentary parties.

Also included in the package is a ban on the export of aviation engines to Russia and sanctions against the energy and mining sectors.