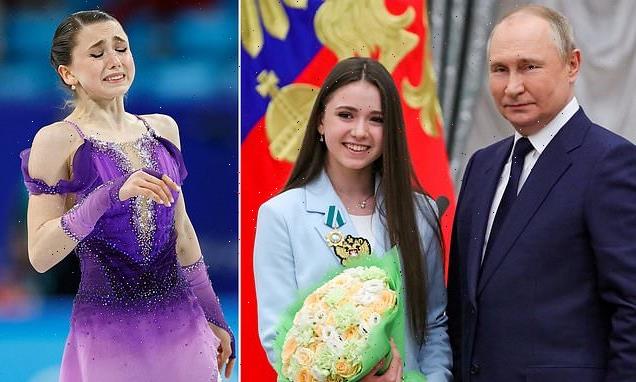 Russian President Vladimir Putin said on Tuesday that teenage figure skater Kamila Valieva’s performances at the Winter Olympics were ‘perfection’ and could not have been achieved with the help of banned substances amid uproar over her failed doping test.

Valieva, who turned 16 on Tuesday, failed a doping test at the Russian national championships last December but the result was only revealed on February 8, a day after she had already helped the Russian Olympic Committee (ROC) win the team event at the Beijing Games.

The case cast a shadow on Russians’ participation at the Games as they already faced increased scrutiny over separate doping sanctions that saw them compete without their flag and national anthem. 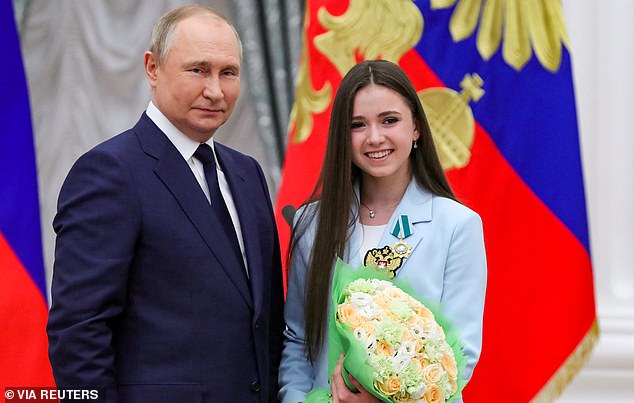 Russian President Vladimir Putin said on Tuesday that teenage figure skater Kamila Valieva’s performances at the Winter Olympics were ‘perfection’ and could not have been achieved with the help of banned substances. Pictured: Putin with Valieva during an awarding ceremony honouring the country’s Olympians at the Kremlin in Moscow, Russia, on Tuesday 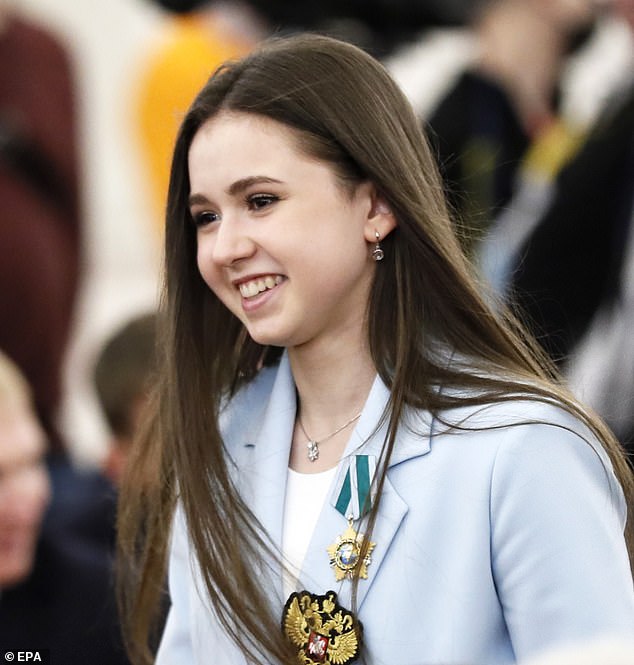 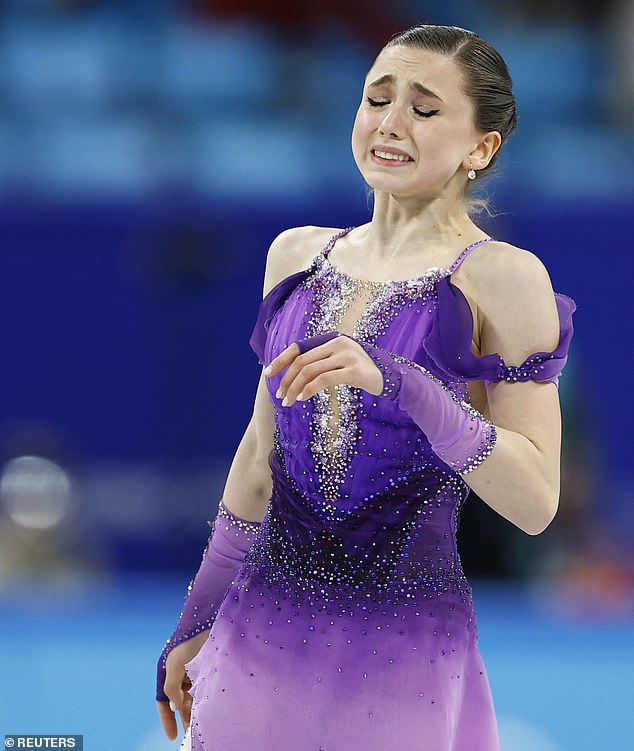 Valieva was cleared to compete in the women’s single event in Beijing by the Court of Arbitration for Sport despite ruling that the teenager had broken doping rules after one of her samples from December tested positive for trimetazidine. Pictured: Valieva is overcome with emotion after falling during the women’s figure skating competition on February 15 at the Winter Olympics

‘Through her work, she brought the sport to the level of a real form of art,’ Putin said of Valieva at a televised awards ceremony at the Kremlin for medallists from the 2022 Beijing Winter Olympics.

Valieva was cleared to compete in the women’s single event in Beijing by the Court of Arbitration for Sport despite ruling that the teenager had broken doping rules after one of her samples from December tested positive for trimetazidine.

The court allowed her to continue competing at the event, saying that she is a ‘protected person’ who could suffer ‘irreparable harm’ from a ban. 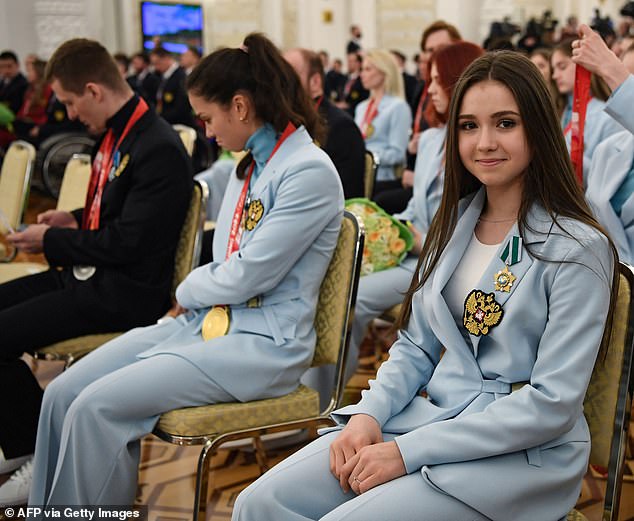 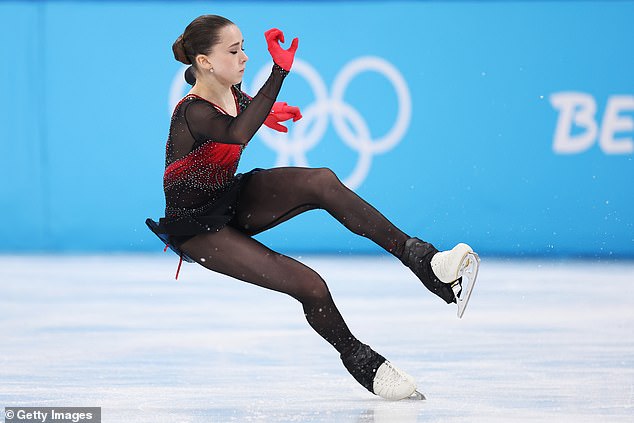 Timeline of the doping scandal that rocked the Olympics

Dec 25, 2021: Valieva, 15, gives a sample during a skating contest in Moscow which is taken by Russia’s anti-doping agency RUSADA and sent to a lab in Sweden for testing

Feb 7, 2022: Valieva wins gold during the team figure skating event in Beijing, becoming the first woman to land a quadruple jump in the process

Feb 8: A World Anti-Doping Agency lab in Sweden reports that the sample from December 25 is positive for banned substance TMZ

This triggers an automatic ban by RUSADA, which stops her from taking part in the rest of the Olympics

The medal ceremony for the team skating event is delayed

Feb 9: Valieva appeals against the decision, and RUSADA overturns the suspension – clearing her to compete in the singles skating event on Feb 15

Feb 10: The International Olympic Committee appeals against the Russian decision, and the case is referred to the Court of Arbitration for Sport

Feb 11: The International Testing Agency, which is leading the case on behalf of the IOC, confirms that Valieva is the athlete involved

The IOC appeals to judges to make a ruling before Feb 15, when Valieva is next due to compete

Feb 13: The Court of Arbitration for Sport holds a hearing in which Valieva argues the positive test result was due to her grandfather’s medicine

Feb 14: The skater is cleared to compete because officials say she is a ‘protected person’ who could suffer ‘irreparable harm’ from a ban

Feb 15: Valieva returns to the rink for the women’s short program, in which she finishes top of the leaderboard despite faltering

Valieva was favourite to win Olympic gold in the women’s free skate competition but she stumbled to fourth place with an error-laden free skate.

After she finished her performance, the teenager held her head in her hands and threw up her arms in resignation and disgust, before leaving the ice with her hands on her hips.

Valieva was left sobbing after her scores were read and was consoled by her coaches as supporters yelled her name.

It was a disastrous end to the event for Valieva, who created shockwaves by winning gold for the Russian Olympic Committee (ROC) in the team event a week earlier before it was revealed that she had failed a doping test taken at Christmas.

Valieva became the first woman to land a quadruple jump at the Olympics during the team event.

The International Olympic Committee (IOC) decided not to award any medals for the figure skating team event at the Olympics until Valieva’s doping case has been resolved, something that could take months.

It has left the figure skating teams from United States and Japan, who came second and third in the team event, frustrated after they have still not been able to get their well-earned medals.

In response, IOC president Thomas Bach has offered the U.S. figure skaters Olympic torches as holdover gifts while they await a resolution of the Russian doping case that is preventing them from receiving their silver medals.

Valieva has claimed the drug triggering her positive, trimetazidine, entered her system by accident. But the World Anti-Doping Agency filed a brief stating two other substances she acknowledged taking, L-carnitine and Hypoxen – though both legal – undercut the argument that a banned substance could have been ingested in error.

Hypoxen is used to increase blood flow to the heart, and L-carnitine is an oxygen-boosting performance enhancer that is banned if injected above certain thresholds. When those substances are combined with trimetazidine, U.S. Anti-Doping CEO Travis Tygart said, it’s ‘an indication that something more serious is going on.’