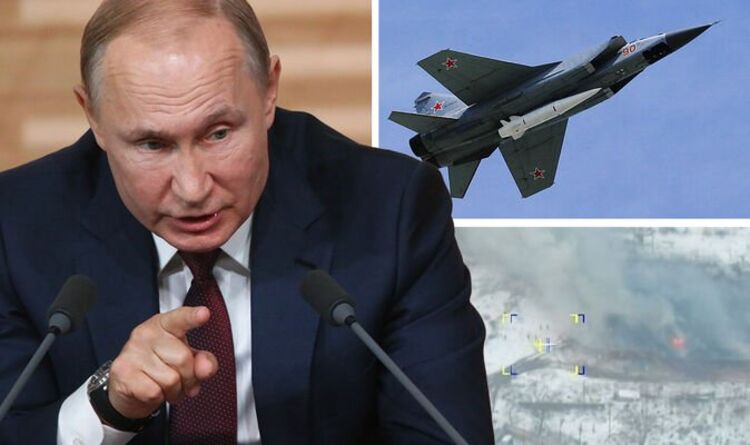 Henry Wilkinson was speaking after Defence Ministry spokesman Igor Konashenkov claimed Russia yesterday (Sunday) used Kinzhal (Dagger) missiles to destroy a fuel storage facility used by the Ukrainian military, the second hypersonic strike in two days. Russia prides itself on its advanced weaponry, and Putin said in December that Russia was the global leader in hypersonic missiles, whose speed, manoeuvrability and altitude make them difficult to track and intercept.

Russia claims the Kinzhal can hit a target at a distance of up to 1,240 miles, and can fly travel in excess of than 3,700 mph.

Mr Wilkinson, Chief Intelligence Officer at security intelligence firm Dragonfly, told Express.co.uk: “The use of a hypersonic missile seemed to be intended to communicate a message rather than a tactical choice.

“Russia has less expensive missiles available to it that would still have been effective against such a target.

“The value of hypersonic weapons is that they can penetrate anti-missile defences but the tactical value of the target, in this case, seems disproportionately low to the value of the weapon used.”

It, therefore, seemed reasonable to assume the use of the weapon – and the location of a target so close to a NATO members state’s border – was intended to serve a strategic purpose, namely one of signalling to NATO and the West generally that Russia has such projectiles and capabilities and was prepared to use them, Mr Wilkinson stressed.

He added: “It has generated a lot of media coverage that has also been quick to point out that such missiles can carry nuclear payloads.

“If this sows fear and doubt among western publics and governments then I suspect Russia will see this as a success and we can probably expect more such attacks.”

The approach was consistent with Putin’s apparent strategy when it came to Ukraine, Mr Wilkinson pointed out.

He explained: “That is, to use excessive force and means to intimidate the Ukrainians and anyone that backs them to compensate for its evident failure on the battlefield to defeat Ukrainian forces and achieve its goals, and to achieve momentum amid heavy losses of men and materiel.

“The extreme violence and destruction wrought upon civilians and cities in the south and east of Ukraine reflect the same approach, to bring about a resolution to a conflict in Russia’s favour by making the stakes so high it forces capitulation or at least gives Russia a stronger negotiating position.

“And the risks are that as it fails Russia will keep looking for other ways to raise the stakes until it does succeed.”

Asked about Russia’s use of hypersonic weapons on CBS’s Face the Nation on Sunday, US Defence Secretary Lloyd Austin said: “ think again, the reason that he’s resorting to using these types of weapons is that he’s trying to re-establish some momentum.”

He added: “And again, we’ve seen him attack towns and cities and civilians outright. We expect to see that continue. But I don’t think that this in and of itself will be a gamechanger.

You kind of question why he would do this. Is he running low on precision-guided munitions? Does he have complete confidence in the ability of his troops to re-establish momentum?

“But I don’t see this in and of itself a gamechanger. I cannot confirm or dispute whether or not he’s used those weapons.”