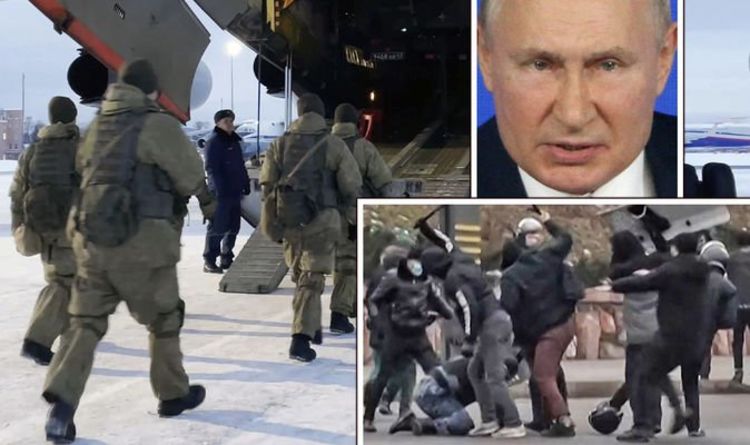 The elite troops were sent as thousands of citizens have taken to the streets in the central Asian country since New Year’s Day over a hike in fuel prices. This has since been reversed but the action ignited longstanding anger at Nursultan Nazarbayev – who ruled the country from Soviet times and still wields considerable power despite stepping down three years ago as president.

Police said they killed dozens of rioters in the main city of Almaty while state television reported that 13 members of the security forces had died, including two who had been decapitated.

In a bid to quell this dissent, Nazarbayev’s hand-picked successor, President Kassym-Jomart Tokayev, called for Russia’s help as part of a Moscow-led military alliance of ex-Soviet states.

Russian paratroopers were later sent and “the advanced units of its contingent have already begun to fulfil their assigned tasks”.

As well as the Russian contingent, troops from Belarus, Armenia, Tajikistan and Kyrgyzstan were also being sent, the secretariat of the Russian-led Collective Security Treaty Organisation said.

It did not disclose the overall size of the force.

While international observers have blamed the unrest on anger at the country’s authoritarian regime, its Government said foreign-trained terrorists had seized buildings and weapons.

President Tokayev said: “It is an undermining of the integrity of the state and most importantly it is an attack on our citizens who are asking me…to help them urgently.”

He spoke as Reuters reported that a presidential residence and the mayor’s office were both ablaze.

But within a short time of the troops’ arrival, Almaty’s airport, which had been seized by protesters, was back under the firm control of military personnel.

Gunshots rang out as the troops approached a crown of protestors, Reuters reported.

The local TASS news agency quoted the Kazakh health ministry as saying more than 1,000 people had been injured during the protests, and more than 400 of them were in hospital.

Western countries have called for calm.

China, meanwhile, described the events as an internal matter for Kazakhstan and said it hoped the situation would stabilise soon.