But as a video surfaced showing Mr Putin’s ‘Flying Kremlin’ presidential plane being escorted by no less than six of the planes, and with Britain’s Queen Elizabeth aircraft carrier now equipped with F-35 jets – which fighter has the upper hand? The footage taken from Mr Putin’s IL-96-300PU, and his escort was reported to be roughly half the total number of these advanced fighter jets currently in Moscow’s air force. The state-of-the-art Su-57 has been slow in development over a decade or so and their appearance alongside the presidential Ilyushin is a sign that they are now fully in service.

At the end of last year the Russian air force boasted around a dozen of the planes.

The comparison is particularly timely because Turkey is facing the prospect of being barred from purchasing a US-built fleet of F-35s over its decision to purchase Russia’s S-400 missile system – a move Washington has grave concerns about.

The possibility of Russia filling the void was raised by Sergey Chemezov, head of Russia’s top state-run industrial conglomerate Rostec earlier this month.

He told motoring website thedrive.com, which has a section on military equipment: “These fifth-generation Russian fighter jets – the Su-57 – have outstanding qualities, and show promise for export”.

He stressed Russia was “ready to cooperate” on possible sales to Turkey of the jets if plans to buy the F-35s fell through, as looks likely.

A subsequent analysis by Military Watch magazine concluded it was the Russian plane which came out on top in a side-by-side comparison, with a “considerable” advantage in the air.

The article, published last year, said: “While the Su-57 and the F-35 are both fifth generation fighters, the two are hardly comparable in their role or their capabilities.

“The F-35 was designed as a lighter and less costly complement to the elite F-22 Raptor air superiority fighter, a platform no longer in production and banned from export, and itself lacks the specialisation of heavier fighters and retains poor air to air combat capabilities. 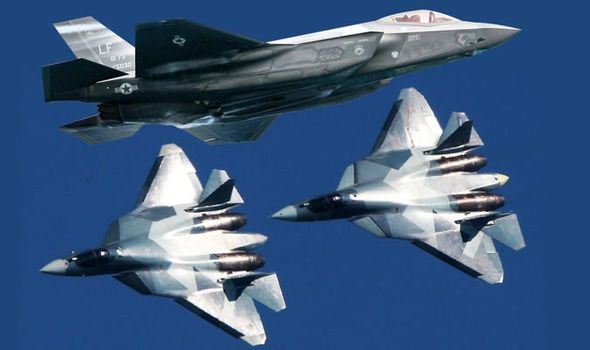 “The Su-57 by contrast was designed as a heavy twin engine air superiority platform, much like the F-22, and was intended to contend with American Raptors over Europe and the Pacific.

“This is reflected in its speed, altitude, sensors, missile carriage, engagement range, and manoeuvrability – all fields in which the heavier Russian fighter is far superior.” 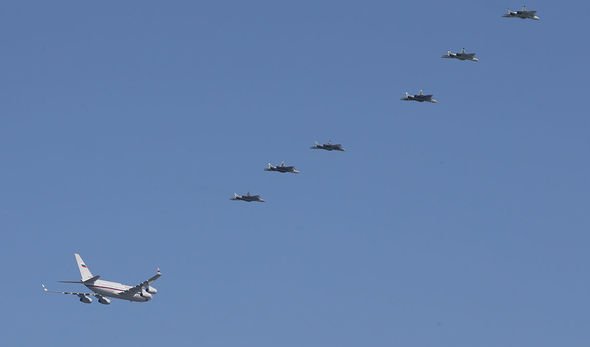 It added: “Many of these missiles are capable of travelling at several times the speed of sound, and are significantly more capable than the subsonic air to ground munitions relied on by the F-35 – a platform which relies heavily on low speed subsonic missiles.

“The heavy fighter’s strike capabilities, coupled with its high survivability, could make it a highly value asset for operating in the Middle Eastern theatre.”

Mr Putin was flying to inspect military units in the Astrakhan region before returning to his summer base at Sochi on the Black Sea for the session with Mr Pompeo.

State-controlled Sputnik News Service reported: “The cutting-edge fighters took off from an airfield at the Chkalov State Flight Test Centre to meet the head of state’s aircraft.

“During the landing, the president’s jet was escorted by the Su-57s to starboard.” 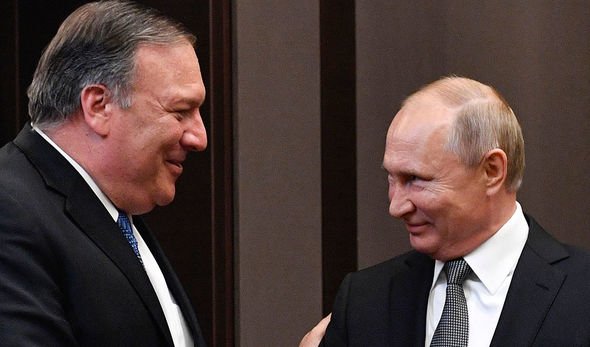 The Chkalov complex is the Russian military’s largest research and development site for advanced aircraft as well as air defence systems.

At Chkalov, Mr Putin inspected advanced Russian weaponry including the hypersonic KH-47M2 Kinzhal which travels at ten times the speed of sound.

It is launched from a high-altitude MiG-31 fighter jet and can be fitted with nuclear or conventional weapons. It has an effective range of 1,250 miles.

(Additional reporting by Will Stewart)