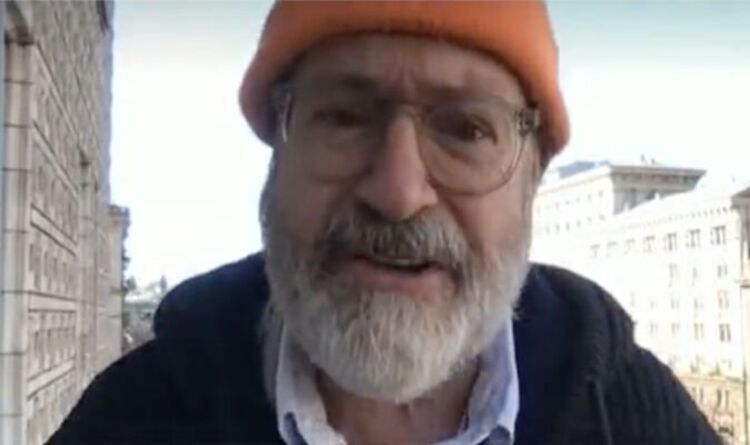 Russia has struggled to explain the sinking of the Moskva warship with military officials and state TV pundits offering contradictory claims about the incident. The flagship Russian military cruiser sunk on Thursday, becoming the most “significant and symbolic” humiliation for President Vladimir Putin yet. While the Kremlin has refused to provide any details on possible casualties, it has backtracked on initial claims that all 510 crew members were evacuated.

Speaking to LBC, British reporter John Sweeney said that the latest reports in Kyiv “is that as many as 450 Russian soldiers went down with the ship”.

Such a loss would amount to the largest number of deaths of Russian servicemen in a single incident since the Second World War.

The captain of the Russian warship Moskva, Anton Kuprin, was among those killed during the attack that sank it, according to Ukraine.

Mr Sweeney explained: “Apparently what happened, the gossip is, that they distracted the Russians with a drone and they were concentrating on that.

“They worked out that the main radar on the ship only has a 180-degree view so they sent the missiles around the back and bang.”

He added: “The Russian version is laughable. It’s a complete humiliation for Putin but it makes you worry how nasty Putin will get as he’s been humiliated on land and on sea.”

Russia confirmed that the flagship Black Sea missile cruiser had sunk but claims it was because of an unexplained fire, which ignited ammunition.

The cruiser then capsized “in choppy seas” while being towed to port, according to the Kremlin.

Ukraine has said it hit the Moskva with two of its Neptune anti-shipping missiles – a claim backed up by US officials last night.

Military officials and pundits in Russia have pledged revenge for the sinking, sparking ridicule online over the confusing accounts for the Moskva sinking.

Russian-born US reporter Julia Ioffe tweeted: “What I don’t get is, if it wasn’t the Ukrainians who sank your ship, then why would you retaliate for it?”

Kevin Rothrock, who monitors Russian media, tweeted a clip of Russian filmmaker Vladimir Bortko “practically weeping on national TV when discussing the sunk Moskva warship, shouting that this is a ‘real casus belli’ for war against Ukraine”.

Mr Rothrock added: “Except, oops, the Russian military blames it on exploded ammunition. Get your stories straight, guys!”

The families of the sailors aboard Russia’s sunken warship held an unofficial memorial yesterday in Sevastopol, its home port.

The ceremony was presided over by a priest, with a wreath placed at a Black Fleet statue that read: “To the ship and the sailors.”