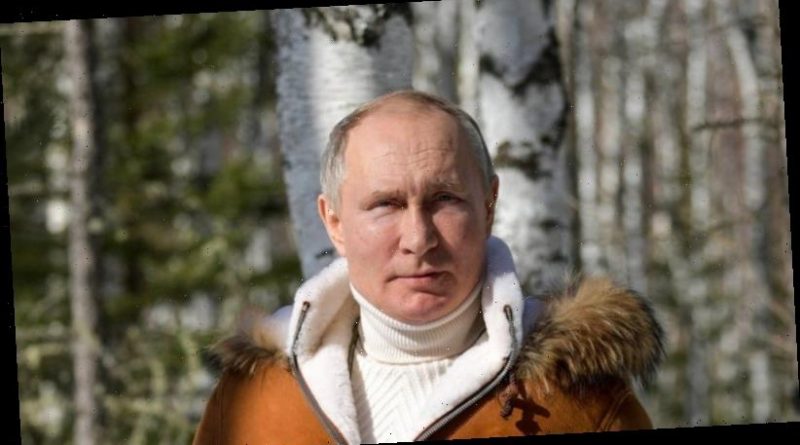 Moscow:– The most cutting blow lately against Russian President Vladimir Putin was not President Biden’s recent “killer” epithet, but the taunt from jailed Kremlin critic Alexei Navalny calling him “grandpa in his bunker”.

Shut off from the public and surrounded by security services, Putin has been largely holed up in his country retreat, protected by a special disinfection chamber for visitors. Navalny’s repeated use of the barb stung because it flipped Putin’s image: no longer a Russian bear, but a cowering senior.

Cue a state propaganda blitz with 68-year-old Putin portrayed as a dynamic leader with years ahead of him and 78-year-old Biden as a doddering has-been. 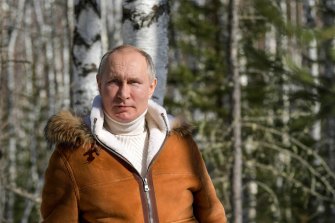 Parliament member Pyotr Tolstoy said Biden had “political dementia”. State TV anchor Dmitry Kiselyov called Biden “the American patient,” noting that “at some point you have to face up to the inevitable” of age catching up. Kiselyov gleefully aired footage of Biden stumbling on the steps to Air Force One with an on-screen banner “Gone with the Wind”.

Biden triggered a clamour of official outrage in Russia after he agreed in a March 17 ABC News interview that Putin was “a killer”. But some Russian analysts argued that Biden had given Putin exactly what he needed with his United Russia party sinking in popularity and elections ahead this fall.

Biden made Putin seem powerful, facing down an external enemy, instead of trying to cocoon himself from the pandemic. (Putin received his first coronavirus vaccine dose last Tuesday, the Kremlin said.)

“In terms of domestic politics, (Biden’s comment) helped Putin, because he was running out of topics,” said political analyst Konstantin Gaaze of the Carnegie Moscow Centre. “Anti-Americanism is something that can be heated up. The basic mode is anti-Western and it’s not the first time, or last time, it is used.” 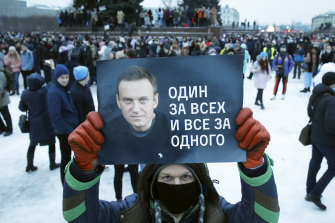 A protester in St Petersburg on January 23 holds up a sign with a Alexei Navalny and the slogan ‘One for all and all for one’.Credit:AP

But Putin has recently burst back into the public eye. He filled a stadium of cheering people in Moscow’s Luzhniki Stadium on the anniversary of Russia’s 2014 annexation of Crimea from Ukraine.

Putin then took Kremlin pool journalists to Tuva in Siberia, where he drove through snowy forest in a hulking all-terrain vehicle and sipped tea at a rustic outdoor table. The event was planned well before Biden’s “killer” comment, but it delivered Putin the chance to pose as a simple “muzhik,” or a real man, who loves nature.

“He was telling people he is in good health and he’s still close to Mother Nature. There was a strong message to this electorate that he’s in the taiga doing manly things,” Gaaze said.

In Siberia, Putin wore a quaint sheepskin jacket and pants,. Headlines in pro-Kremlin media were even more over-the-top than usual: “The rarest shots! The Russian president has never been seen like this!” one outlet gushed. 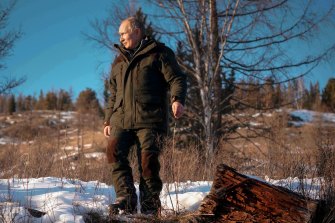 Independent pollster the Levada Center reported this month that support for Putin’s party dropped to an eight-year low, with just 27 percent willing to vote for it.

Opposition to Putin staying in power beyond 2024, when his current term expires, reached an all-time high of 41 percent in a February Levada poll, compared with 48 percent who would like him to stay in power.

In a meeting last month with newspaper editors, Putin spelled out his ideology, boasting of Russia’s patriotism and its unique “genetic code” that distinguishes it from the West.

Russia, he said, is a young, vital nation “on the move,” compared with other ageing societies.

But Gaaze said this ideology had limited appeal and that Putin’s era of political invulnerability was showing signs of fatigue.

“He’s basically a Soviet man who cannot remake the Soviet Union, but he is trying his best to do so,” he said. “He thinks he is the only man up there who understands (ordinary Russians’) mind-set.”

But he said Putin’s talk of Russian dignity and complaints of Western insults to Russia’s Sputnik vaccine did not resonate deeply, for many.

“It’s not the first or third or even the fifth thought of ordinary Russian citizens.”