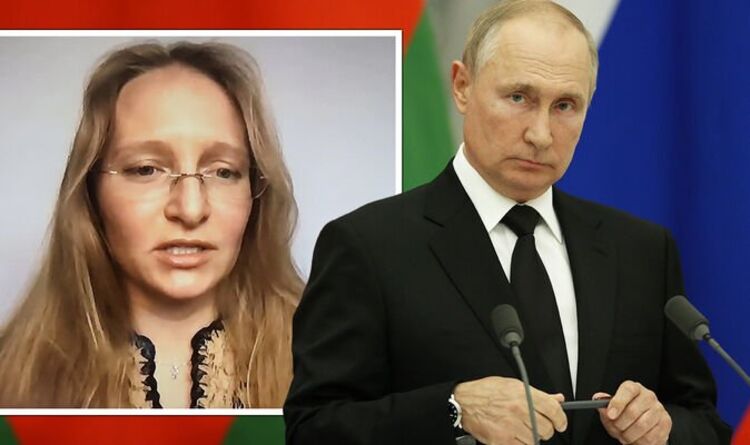 Ukrainian MP warns EU 'will be next' if Putin wins war

Russia’s invasion of Ukraine has entered its twentieth day. The conflict is now said to be getting close to Kyiv, the country’s capital, which many believe is Russia’s main goal. On Tuesday, for the second day running, people in Kyiv woke to residential buildings on fire — many having been hit by Russian missiles and rockets, according to Ukrainian officials.

Ukraine’s President Volodymyr Zelensky has since called on Russian soldiers to surrender, saying that Moscow’s forces had suffered worse losses in his country than in the bloody Chechnya conflict.

He said that military personnel had already begun to understand that they would not achieve anything by war, and added: “I know that you want to survive.”

Mr Zelensky said that any surrendering soldiers would be treated “as people, decently”.

Many say Russian President Vladimir Putin had expected his military forces to swoop in and swiftly take Ukraine, much like the annexation of the Crimean peninsula in 2014.

Attention has since turned to Putin’s personal life and mental state, with some experts attempting to assess his decision-making process by delving into the archives.

Generally, little is known about Putin’s private life and history apart from the brief snippets of rare interviews with him and his family over past decades.

We know that he married air stewardess Lyudmila Putina in 1983 — they would divorce in 2014 —and that they have two children together, Katerina Tikhonova and Maria Vorontsova.

Katerina, or Katya, was born in August 1986 in Dresden, Germany, where Putin was based as a KGB officer, while Maria, or Masha, was born in Leningrad in April 1985.

His daughters have given just one interview, when their father was appointed acting president in 2000 after the ailing Boris Yeltsin resigned from his post.

The transcript, published in a collection of interviews with Putin, his family and friends called First Person: An Astonishingly Frank Self-Portrait by Russia’s President Vladimir Putin, is a snapshot of the family just as they entered the bubble of power.

A 14-year-old Katya reveals that she “flipped out when I heard that PApa was going to be acting president.

she wouldn’t joke about such a thing.”

She said: “When Mama told me this, I thought she was joking.

“Then I realised that she wouldn’t joke about such a thing.”

Lyudmila, meanwhile, says she “cried for a whole day” when she heard the news of her husband’s appointment.

This was because she “realised that our private life was over”.

Already, she said, the girls saw their father “more often on television than at home. But he always goes in to see them, no matter what time he gets home”.

Lyudmila added: “He really loves the girls a lot.

“Not all men treat their girls as lovingly as he does. And he spoils them.

“I’m the one who has to discipline them.”

Both Katya and Masha attended the German-language Friedrich Haass German International School when they moved back to Moscow in 1996, and they then went to St Petersburg State University, where Masha studied biology and Katya majored in Asian studies.

In other interview excerpts, Lyudmila provided vital clues as to what family life was like with Putin.

In 2000, she revealed how they first met in the Eighties: through mutual friends.

Going on a double date to a theatre, Lyudmila recalled how Putin was “poorly dressed” and “very unprepossessing”.

She added: “I wouldn’t have paid any attention to him on the street.”

Lyudmila also spoke for a 2002 Foreign Policy biography of Putin about how she was left alone during Masha’s birth.

She said she called a taxi to take her to the hospital because he was away on a business trip.

Upon his return, she claimed Putin ordered that the baby girl would be called Maria after his mother, even though his wife preferred Natascha.

Lyudmila said: “I was in tears.

“But then I realised there was no choice in the matter and my daughter was going to be Maria.”

Aside from these intimate glimpses, Putin has successfully kept a lid on both his and his family’s lives.

His aversion to questions about anything other than politics was clear when he was asked about his alleged relationship with Alina Kabayeva, a rhythmic gymnast, at a press conference in Sardinia, Italy in 2008.

He said: “I am, of course, aware of the cliché that politicians live in glass houses.

“But even in these cases, there must be some limits.

Then-Prime Minister of Italy Silvio Berlusconi, who was standing beside Putin, jokingly pretended to shoot the Russian journalist who had asked the question.