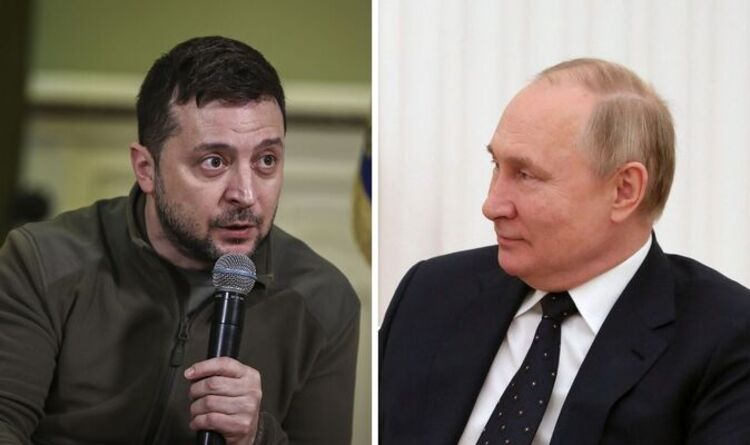 Russia’s invasion of Ukraine has been condemned across the world, while Putin has been accused of “war crimes” by Ukrainian President Volodymr Zelensky and US President Joe Biden, among others. When Putin first launched the invasion, he claimed to be doing so to achieve the “demilitarisation and denazification” of Ukraine, despite the democratically-elected Zelensky being Jewish, with family who died in the Holocaust. The Russian President continued to peddle this lie at a rally held in Moscow on Friday.

Standing in front of a sign that read “For a world without Nazism”, Putin told thousands of Russian citizens at the Luzhniki Stadium that Ukraine was enacting “genocide” against Russian speakers.

He said: “We know what we need to do, how to do it and at what cost, and we will absolutely accomplish all of our plans”.

The absurd “denazification” claim is not the first time Putin has lied about Ukraine, however.

In 2014, Putin triggered shock and a wave of sanctions from the West after he illegally annexed the Crimean peninsula.

Read More: Russia and Ukraine edge closer to deal to bring war to an end

When justifying the move at a press conference, Putin launched into a tirade against the then-government in Kiev and at one point even demanded a reporter to admit whether he thought the transfer of power in Kyiv was an “unconstitutional coup”.

At the time, deadly clashes between protestors and security forces in Kyiv culminated in the ousting of Putin’s puppet leader Viktor Yanukovych and the overthrow of the Ukrainian Government.

During the press conference, Putin told five lies in particular about Ukraine.

Firstly, Putin claimed that the unidentified armed men who took control of Crimea were local self-defence units, despite their uniforms easily identifiable as Russian army issue.

Though the men were armed with military grade heavy duty weapons and were suspiciously well-trained, Putin claimed they were not part of the Russian military and that anyone could buy Russian uniforms.

He said: “The post-Soviet space is full of such uniforms.”

Putin also claimed that the coup against Mr Yanukovych, who had ties with the Russian leader, was backed by western countries and incited by people “sitting in America doing experiments like on rats”.

He added: “I think that this was all well prepared.

“Of course, there are military units and they are there to this day, they are well-prepared and in this the western instructors did well.”

Though western donors had given hundreds of thousands of dollars to groups campaigning against Mr Yanukovych’s regime, there was no evidence at the time that the US or UK had offered military training to the so called “self defence units”.

In the 2014 press conference, the Russian President also said that the dozens of anti-Russian protestors killed by sniper bullets in Ukraine were victims of their own leaders.

Despite eyewitness accounts of police snipers shooting citizens protesting Russia’s annexation, Putin said: “There is the opinion that [snipers shot]  on the orders of one of the opposition parties.”

Putin cited “freely available information” to back his claim, though at the time there was also video footage of snipers in police uniforms shooting at protestors.

The Russian President also claimed that the pro-Europe protestors had also shot a member of the former ruling party and set fire to another.

In actuality, protestors threw stones and Molotov cocktails at a Party of Regions office, after which a fire broke out.

There were no credible reports of anyone being shot.

Though the Russian leader agreed with protesters that Ukraine’s previous regimes were all “crooks” and insisted that Mr Yanukovych had no power or political future, he added that the ousted leader remained the legitimate President.