Russian President Vladimir Putin voiced outrage after the Kerch bridge, which links Crimea to Russia, was severely damaged by an exploding truck on Saturday. He accused Ukraine of carrying out a “terrorist act” despite the country having not claimed responsibility. The Kerch Bridge is important to Russia for a number of reasons.

Firstly, it is a key supply route for Russian military stationed in Crimea, which was illegally annexed in 2014.

It also holds symbolic value for the Kremlin in its attempts to claim the peninsula as its territory. When Putin opened the bridge in 2018, he branded it a “miracle”.

Political scientist and expert on Russian security, Mark Galeotti, believes that the explosion is “a direct assault on the Russian president’s authority”.

Writing for The Sunday Times, he added that this could indicate Russian forces are about to lose Crimea after eight years of occupation. 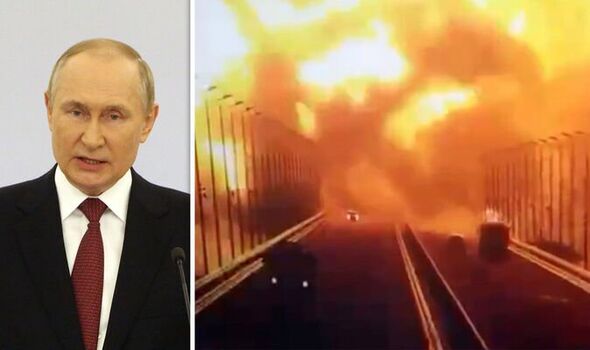 Analysing who could have carried out the attack, it was noted how the Kremlin is convinced it was Ukrainian forces. But the fact that the truck which exploded on the bridge was driven from southern Russia could suggest a possibility that anti-Putin demonstrators could have orchestrated an attack.

Mr Galeotti said that both scenarios would be “embarrassing” for Russian security services (FSB) and “worrying” for Putin. If the FSB comes under fire for allowing an attack to happen, this will also serve as an “indirect criticism of Putin”.

On the significance of the bridge, he said: “The bridge symbolised the reunification of Crimea with Russia. It may not have been destroyed, but Putin had closely identified himself with the bridge, driving the first lorry over the roadway when it was opened.

“Thus this is a blow not just to Russian national pride, but also very specifically to Putin’s.” 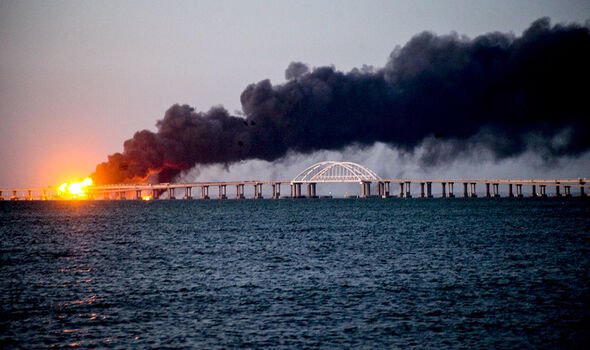 It could also lead to further setbacks for Russian forces in Ukraine. Mr Galeotti believes that the Kremlin will “privately be furious” because Crimea means more to ordinary Russians than the other territories that Putin has annexed. The expert warned that losing Crimea “would damage Putin’s hopes of being remembered as a great Russian state-builder. It might also be the last straw that brought him down.”

Ukrainian MP, Oleksiy Goncharenko, also thinks that Putin, as well as his military, will suffer huge reputational damage as a result of the explosion.

He told Channel 4: “If the bridge is damaged severely and the trains cannot use it for some time, it will mean that Russian forces around Kherson will have a lack of supply and logistics.

“The bridge can be just damaged, but Putin’s image is .” 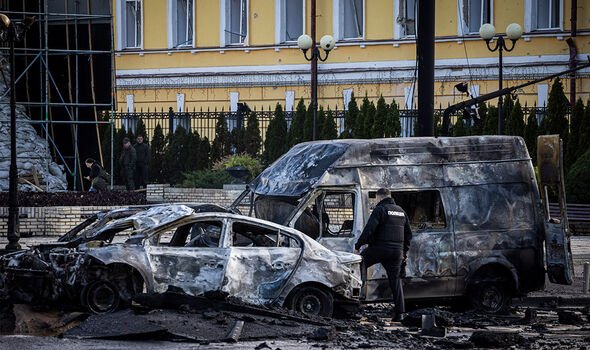 Russia retaliated on Monday morning, hitting Ukraine’s capital Kyiv with at least four missiles. Other cities were also targeted, with areas around Zaporizhzhia and Mykolaiv struck overnight. Ukrainian President, Volodymyr Zelensky, confirmed that some had died as a result of the strikes.

He said on Monday: “They are trying to destroy us and wipe us off the face of the earth. Destroy our people who are sleeping at home in Zaporizhzhia. Kill people who go to work in Dnipro and Kyiv.

“The air alarm does not subside throughout Ukraine. There are missiles hitting. Unfortunately, there are dead and wounded. Please do not leave shelters. Take care of yourself and your loved ones. Let’s hold on and be strong.”