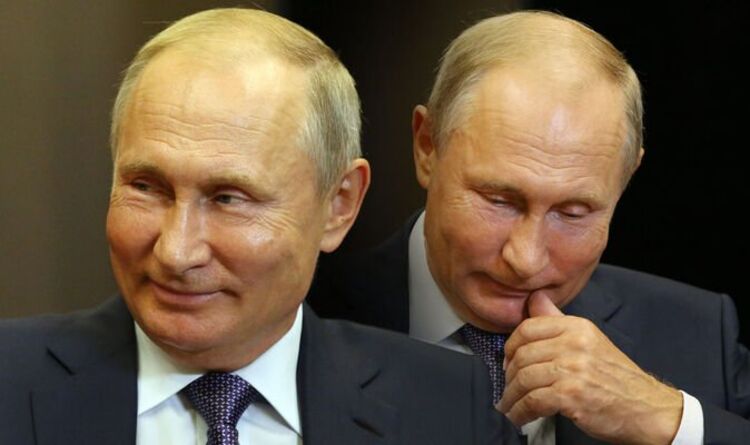 The Russia-Ukraine war is in its sixteenth day, with Ukrainians valiantly fending off Moscow’s sizable military. Putin has already overseen the destruction of several major cities in the country, as well as the capture of Kherson in the south. While Kharkiv — Ukraine’s second largest city — has been pounded with missiles and rockets, Kyiv remains largely untouched.

But new satellite images show a convoy of Russian military vehicles is just outside the capital and is dispersing into the woods, suggesting a new tactical direction has been agreed on.

While Putin had amassed over 100,000 troops along Ukraine’s border in the run-up to the invasion, his green-light to cross into Russia’s neighbour was still met with widespread surprise.

The willingness to invade a sovereign state and potentially cause World War 3 has left many questioning Putin’s mental state.

But Aubrey Immelman, associate professor of psychology at the College of Saint Benedict, Saint John’s University, believes that little has changed in terms of Putin’s psychological disposition, telling Express.co.uk that the Russian leader is simply acting on beliefs he has held for decades.

Prof Immelman has spent years researching and creating psychological profiles of political leaders from around the world, including Putin.

His work has found that Putin has high levels of narcissism, something which from a Freudian perspective suggests he may have what is known as the ‘little prince’ syndrome.

However, citing a reinterpretation of the syndrome, Prof Immelman explained that Putin may be suffering from a “fragile self-image”, this leading to what has been termed a “splitting” of his personality.

The psychologist said: “It’s not necessarily true that a person had all this non-contingent positive reinforcement, it might be that they actually have a very fragile self image.

“And, if you puncture that, that’s where you see the person go into purple rages when they’re humiliated or made angry.

“Part of this malignant narcissism model says that a person engages in ‘splitting’: the kind of good and bad aspect of someone, which lends itself to the need to create an enemy.

“We actually do see some of that in Putin where he’s the saviour, the white knight, and you have the evil West and Ukraine, and the ‘nazis’ and whatever else he uses with reference to Ukraine.

“But according to researchers like Betty Glad, these paranoid defence systems eventually break down, and while she isn’t clear about what might happen, it can be inferred that she means to appease them is to fuel them.”

Images and videos of civilians and civilian infrastructure being targeted by Russian missile strikes has thrown into question how far Putin is willing to go to achieve his objectives.

This week, a maternity hospital was hit by a Russian airstrike, according to officials.

President Volodymyr Zelensky said people were trapped under the wreckage, and called the attack a war crime.

Three people including a child were killed, with a further 17 injured.

Pavlo Kyrylenko, the head of the Donetsk regional administration which includes the port city of Mariupol, said the attack happened during an agreed ceasefire with the Russian side, according to Interfax Ukraine.

It published footage showing burned out buildings, destroyed cars and a huge crater outside the hospital, which has since been confirmed by news outlets, including the BBC.

Dr Arthur Cassidy, a Northern Irish psychologist, told News Letter that Putin had “no remorse” given the events, and was displaying the traits of a psychopath.