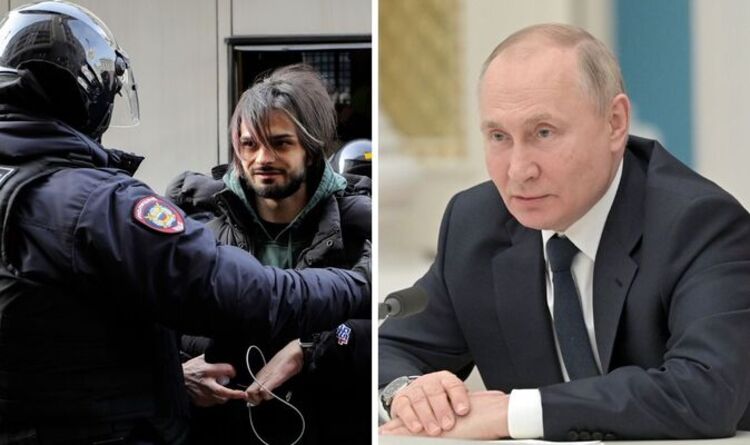 War rages on in Ukraine with two million people having fled the country since Russia launched their invasion two weeks ago. This morning, Ukrainian Deputy Prime Minister Iryna Vereshchuk said Russia had agreed to a ceasefire in areas of humanitarian corridors from 9am to 9pm, as more Ukranians desperately try to flee the warzone. Ms Vereshchuk said the evacuation corridors would be open today in several places, including Mariupol, and warned Russian forces against shooting in those areas.

Russia first attacked Ukraine on February 24 by shelling key cities across the country with military strikes.

Putin absurdly justified the attack by claiming he was seeking the “denazification” of Ukraine, a country whose democratically-elected president, Volodymyr Zelensky, is Jewish.

Meanwhile, Putin’s Foreign Minister Sergei Lavrov bizarrely stated on Monday that the Kremlin was invading Ukraine to prevent a separate war in the country.

According to a tweet posted by the Russian embassy, Mr Lavrov said: “The goal of Russia’s special military operation is to stop any war that could take place on Ukrainian territory or that could start from there.”

Putin’s propaganda machine has convinced few people in the West that Russia’s invasion of Ukraine is justified.

Meanwhile in Russia there were protests against the war in 53 cities on Sunday, despite the Kremlin having restricted the flow of free information to its people and thousands have been arrested in protests since the start of the war, including children as young as seven.

Protests in Russia have taken place for the last 11 years, as ordinary Russians realised they were not being told the full story by their leaders.

In 2011, after Putin’s United Russia party won 49 percent of the vote in Russia’s parliamentary elections, despite hardly anyone admitting to have voted for him, Russia’s burgeoning middle class took to the streets.

At the time, protester and real estate consultant Alan Gatsunaev told the Independent: “I’m not exactly sure how to explain why I’ll be at the protest. It just feels like I can’t not be there.

“I have never thought of myself as a political person, and I think the first time I heard the name Surkov was six months ago.”

Vladislav Surkov was Russian politics’ chief ideologist from 1999 to 2011 during the first rule of Putin and his stop-gap replacement Dmitry Medvedev.

Mr Gatsunaev continued: “But I have changed recently. The thing that is most offensive is the level of cynicism.

Don’t Miss:
Ukraine MP on situation in Kyiv: ‘Kids fighting for their lives’[OPINION]
Putin ‘wants to be in history books’ with ill-judged invasion[INSIGHT]
How Cold War ended amid fears of new battle between superpowers[ANALYSIS]

“With the internet, you can literally see that you are being lied to, and people have lost patience.”

Meanwhile TikTok is no longer letting people in Russia upload new material after Putin passed a law which criminalised what was referred to as “false information” about the invasion.

A western businessman also interviewed by the Independent in 2011, added: “It’s amazing how quickly the atmosphere in the office has changed.

“The Russians in the office were never politicised, they never wanted to talk about politics.

“Suddenly all the office conversations are about politics, everyone is debating whether or not they want to go to protest.”

Eleven years on, ordinary Russians have risen up once more, as 4,300 people were reportedly detained at anti-war protests across Russia at the weekend, according to the country’s authorities.

Protests have become increasingly restricted by Russian law in recent years, and some 1,700 people were detained in Moscow, the country’s capital.

The West has imposed heavy sanctions on Russia that have affected all echelons of society.

While oligarchs’ ability to do business has been hindered, the poor have been hit by higher prices and the likely prospect of inflation caused by the crashing ruble.

Meanwhile the middle class have been severed from western services they had grown accustomed to, including Apple, Visa and Nike, among many others.