Singapore: China has been preparing for the possibility that it might one day be cut off from large parts of the global economy for years.

It now has its own payment systems, a blossoming technology sector, advanced manufacturing capability, and is diversifying its fossil fuel away from the West towards its own mines and economic partners in Africa and South America. On Monday, it announced it would produce more domestic coal this year than its entire imports combined.

The trend towards self-reliance is clear and prudent for a superpower facing a rapidly deteriorating international environment and with its own plans to take over Taiwan in the coming decades. President Xi Jinping’s “internal circulation” model will in theory allow China’s economy to continue functioning on the strength of its domestic market and the 1.4 billion who populate it. 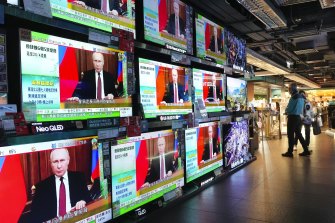 TV screens broadcast news of Russian troops in Ukraine, in Hong Kong. As Russia intensifies its assault on Ukraine, it is getting a helping hand from China in spreading propaganda.Credit:AP

But it is not ready yet. Chinese consumers are not wealthy enough to support it, it relies heavily on critical imported technology such as semi-conductors and Chinese banks are still heavily intertwined in global financial markets. Unfortunately for Xi, Vladimir Putin’s war on Ukraine has just accelerated the calculations being made in Beijing by a decade.

That urgency was underlined on Monday by three reports from The Financial Times, Washington Post and The New York Times quoting anonymous US intelligence sources that claimed Russia asked China to supply military equipment to Ukraine. Such a move, if agreed to, would result in the first proxy war between the US and China and international sanctions that would dwarf any of those with which Beijing has been hit before.

The timing of the leak – ahead of a meeting between China’s top foreign affairs official Yang Jiechi and US National Security Advisor Jake Sullivan in Rome on Monday night AEDT – may have been designed to force China into making its position clear.

“We will ensure that neither China nor anyone else, can compensate Russia for these losses,” Sullivan told NBC on Sunday. 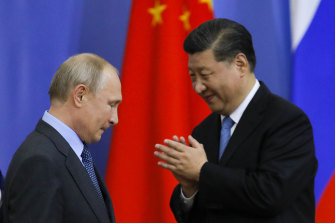 Beijing has spent the past month prevaricating. It says it is deeply concerned about the fate of Ukrainians, but will not label Putin’s invasion a war. It accuses NATO and the US of starting the conflict but says Russia’s false claims of Nazis running Ukraine are part of a “complex historical environment”. On Sunday, China closed the Paralympic Games in Beijing in the same stadium that six weeks earlier had hosted Xi and Putin and their plan for a new world order based on “peaceful and gradual development”.

It remains unclear if Xi knew the full extent of Putin’s plans on that cold night in February, but he does now – and some believe China’s time to take a position is running out. Europe and the US are tired of Xi sitting with one leg inside the Russian fence.

“At present, it is estimated that there is still a window period of one or two weeks before China loses its wiggle room,” said Hu Wei, the deputy director of the Public Policy Research Centre at China’s State Council’s Counsellors’ Office. “China must act decisively.”

The comments, published on WeChat before being censored and then republished on the US-China Perception Monitor on Monday, are part of a growing debate within China about its role in the Ukraine war as it moves from global challenger to superpower.

“China should rejoice with and even support Putin, but only if Russia does not fall. Being in the same boat with Putin will impact China should he lose power,” said Hu. “Unless Putin can secure victory with China’s backing, a prospect which looks bleak at the moment, China does not have the clout to back Russia.”

If Putin fails and Russia loses its great power status, that will leave China encircled by NATO, the QUAD, AUKUS. Economically and militarily – it needs more time.

“China can only proceed by safeguarding its own best interests, choosing the lesser of two evils, and unloading the burden of Russia as soon as possible,” said Hu.

China may also be pursuing a much longer game than many Western timelines allow.

In 1937 Japan invaded China. The Sino-Japanese war forced a temporary pause to hostilities between the guerillas in the Chinese Communist Party [CCP] and the Nationalist Kuomintang [KMT] who governed China at the time. The Communist Party let the KMT do most of the fighting, while they hid in the mountains and regrouped. Only three per cent of the casualties were from the CCP in 1939, according to a note sent to Josef Stalin by Chinese revolutionary Zhou Enlai.

The KMT finished the war decimated, by 1949 China was ruled by the CCP.

The US may be waiting a lot longer than Monday to find out the answers it wants to hear.