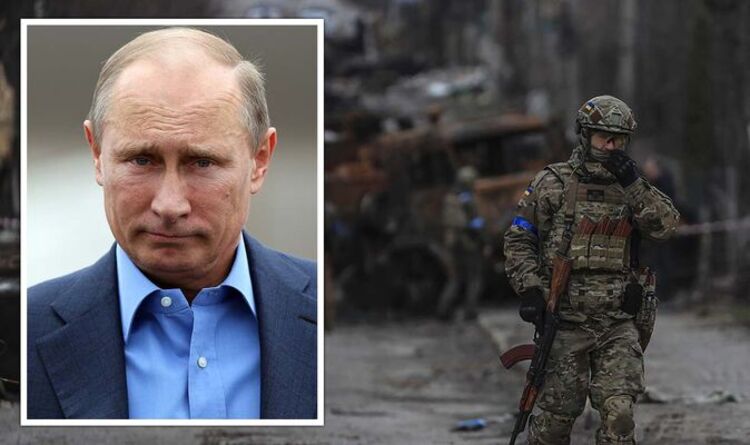 Ukraine: 'Worst is still to come' from Russia says Filipchuk

Ukrainian investigators have started a war crimes probe after bodies of innocent civilians were found on the streets as Russian troops retreated from Kyiv and the surrounding areas. Bucha and Irpin, both on the outskirts of the Ukrainian capital, are quickly becoming synonymous with the most serious abuses of war. Ukrainian authorities said on Monday that the bodies of 410 civilians had been found in the areas surrounding the capital, accusing Moscow of a “deliberate massacre” in Bucha. Horrifying images show civilians with their hands tied behind their backs, apparently shot at close range, and with signs of torture.

Bodies are strewn across the streets as the atrocities of Putin’s war become clearer by the hour.

Satellite images released by Maxar Technologies appear to show a mass grave in Bucha, near the church of St Andrew and Pyervozvannoho All Saints.

While Moscow denies committing war crimes, with Foreign Minister Sergey Lavrov labelling the accusations a “staged provocation”, pressure is mounting for further measures to be imposed on Russia.

He said: “You can imagine the advisors showing these leaders, these heads of governments, the pictures. And they will have had a very human response.”

“The first is that these images are evidence of war crimes by the Russian military — there’s total agreement on that.

“And the second is that the images alone warrant a more severe response.

“So they’re not going to wait for a trial to occur or a UN investigation to complete.

“The breadth of the evidence is so clear that they can push ahead with more sanctions almost immediately.”

Speaking to French radio station Inter, he said: “What just happened in Bucha requires a new set of sanctions and very clear measures.

“I’m in favour of having a sanctions package, especially on coal and oil, which we know are particularly painful.

The European Union’s new sanctions package is likely to be discussed at a meeting of EU finance ministers on Tuesday, a French economy ministry official said on Monday.

According to Politico, the official said that “all options are on the table”.

The US will also launch fresh sanctions this week in a further bid to cripple the Russian economy, national security advisor Jake Sullivan confirmed on Monday.

His remarks came just a matter of hours after President Joe Biden advocated for “war criminal” Putin to face trial.

Mr Biden’s interventions came after a New York Times analysis showed at least 11 bodies had been lying on the streets of Bucha since March 11, when Russian forces controlled the Kyiv suburb.

The newspaper reviewed both satellite images and videos filmed in the town, concluding that many of the civilians had been dead for at least three weeks.

A video filmed by a local council member on Friday was compared and contrasted with satellite images taken nearly a month ago.

The satellite images showed dark figures of similar size to a human body appearing on Bucha’s Yablonska Street between March 9 and March 11.

These figures appear in the same precise positions that they were found when Ukrainian forces recaptured the town this weekend.

Ukrainian President Volodymyr Zelensky fought back tears as he visited Bucha on Monday, and pledged to bring the Russian military to justice.

Speaking to his country in his nightly address, he said: “We are already doing everything possible to identify all the Russian military involved in these crimes as soon as possible.

“This will be a joint work of our state with the European Union and international institutions, in particular with the International Criminal Court.

“All crimes of the occupiers are documented. The necessary procedural basis is provided for bringing the guilty Russian military to justice for every crime they commit.”

To subscribe to ‘Ukraine: The Latest’ go to your normal podcast provider.