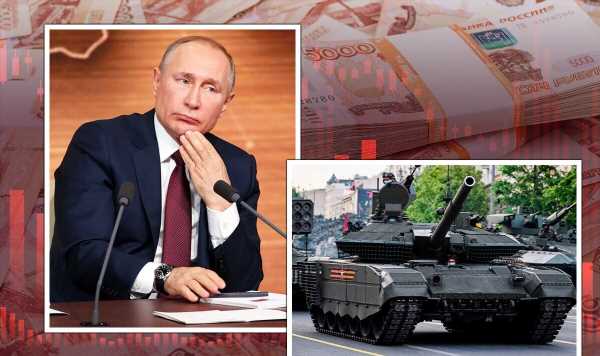 On February 24, the Vladimir Putin gave the go-ahead for more than 100,000 troops massed on the border with Ukraine to invade its neighbour, confirming fears a brutal war was imminent. But Russia’s invasion has been branded a disaster by many – including some of Putin’s own allies – with troops failing to secure a quick victory and having to instead settle for a strategy of capturing eastern territories. The latest figures from Russia’s Finance Ministry on defence spending suggests Putin is becoming increasingly desperate in his attempts to regain some much-needed momentum.

In February, Russia’s defence spending totalled £4.36billion but this jumped to £5.33billion in March, according to the ministry data first reported by The Moscow Times’ Russian service.

But April was by far the most expensive with £7.43billion spent – more than £2billion more than what was pumped out in March.

The defence spending from April is equal to an eye-watering £248.7million per day.

This also now means Russia’s defence spending is almost triple that of the pre-war period, when £2.75billion was spent in January 2022.

In comparison, when looking at the year-ago period, Russia’s defence spending totalled £3billion in April 2021.

During the first four months of this year, nearly £28billion of the Russian budget was allocated toward military expenditures.

The huge defence expenditure will increase suspicions Putin is becoming increasingly desperate in his attempt to trigger a quick turnaround of Russia’s disastrous failings in the war with Ukraine.

Russian troops have been met with fierce resistance from Ukrainian fighters, who have forced their rivals to back out of major cities they had been hoping to occupy.

The latest intelligence update from the UK Ministry of Defence (MoD) has also highlighted some of the major struggles facing Putin and his beleaguered army.

Russia’s army appears to be at breaking point after deploying Chechen forces, including “several thousand fighters primarily concentrated in the Mariupol and Luhansk sectors”.

The MoD said in its latest intelligence update posted on Twitter: “In attempting to overcome Ukrainian resistance, Russia has made significant use of auxiliary personnel.

“This includes a deployment of Chechen forces, likely consisting of several thousand fighters primarily concentrated in the Mariupol and Luhansk sectors.

“These forces likely consist of both individual volunteers and National Guard units, which are routinely dedicated to securing the rule of Chechen Republic Head, Ramazan Kadyrov.

“Kadyrov likely maintains close personal oversight of the deployment, while his cousin Adam Delimkhanov has likely acted as the Chechen field commander in Mariupol.

“The combat deployment of such disparate personnel demonstrates Russia’s significant resourcing problems in Ukraine and is likely contributing to a disunited command which continues to hamper Russia’s operations.”

The MoD also said Russian troops have struggle to gain control of the besieged Ukrainian city of Mariupol, adding this would have contributed to significant personnel losses of Russian forces.

The intelligence update added: “Despite Russian forces having encircled Mariupol for over 10 weeks, staunch Ukrainian resistance delayed Russia’s ability to gain full control over the city.

“This frustrated its early attempts to capture a key city and inflicted costly personnel losses amongst Russian forces.”