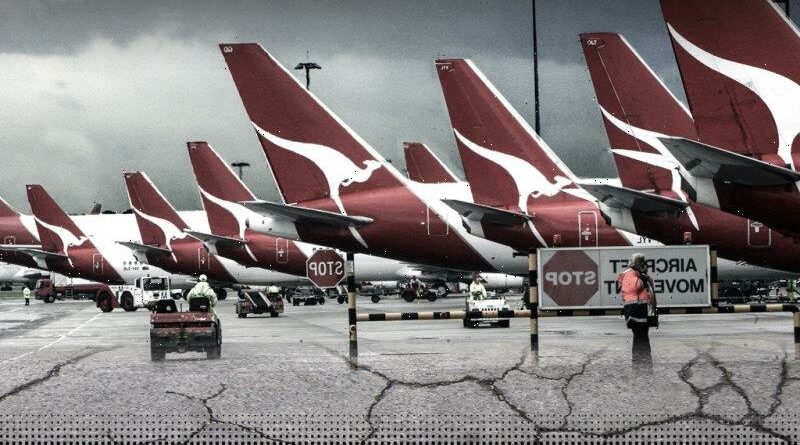 Crime agencies believe Qantas has been infiltrated by bikies and other organised crime groups to facilitate drug importation and other activities that pose a risk to national security.

A classified federal law enforcement intelligence operation code-named Project Brunello has determined that a “significant” number of Qantas staff – up to 150 – are linked to criminality. The operation describes suspected wrongdoing that is “serious and represents a very high threat to the Australian border”. 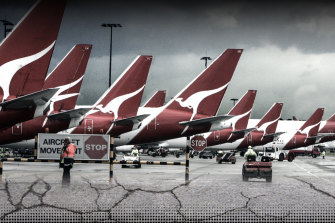 Qantas has allegedly been infiltrated by senior organised crime figures.Credit:

He said Qantas was the only commercial airline that holds a Trusted Trader accreditation with Australian Border Force, “which means every single employee connected to international air freight must pass a fit and proper test. We’ve not been advised by Border Force of any of our employees failing this test.”

But Project Brunello found in its July 2020 report that “trusted insiders” at Australia’s biggest airline have links to organised crime and were able to “cause significant harm” to the Australian community by facilitating smuggling across borders.

The official sources briefed on the report said the Australian Criminal Intelligence Commission inquiry had found some Qantas staff were creating “vulnerabilities in the security of supply chains and critical infrastructure” that risked eroding the public’s faith in border security and in the reputation of the airline.

Individuals identified include a Hells Angels-linked figure in the Northern Territory who is working as a Qantas contractor. He is the subject of intelligence indicating he previously infiltrated Defence Department flights that were subcontracted to Qantas. A Qantas freight contractor in Perth was also found by Brunello to have been repeatedly “using his trusted insider status” to make large drug deliveries.

Brunello assessed that former Qantas baggage handler turned wealthy Sydney racing identity Damion Flower, who pleaded guilty in May to importing $68.5 million worth of cocaine, had actually imported $1 billion worth of cocaine via Qantas and a corrupt Qantas baggage handler, who has also since been jailed. The full extent of Flower’s trafficking through Qantas, along with Project Brunello’s other findings, has never previously been publicly revealed.

Even with declining overseas passenger travel due to COVID-19, ‘the threat of trusted insiders in Qantas will continue to be very high’.

The operation by the nation’s peak law enforcement intelligence agency also uncovered five Qantas staff who had links to alleged “national security” criminality involving Islamic extremism, but said there were no immediate risks.

Seven Qantas staff have been linked to child exploitation, including an employee charged last year with possessing and manufacturing child pornography outside of Australia, with the report warning of a possible small network of sex offenders at Brisbane international airport. 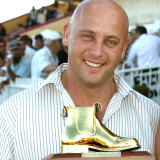 Multiple sources aware of Project Brunello’s findings said they were based on a deep dive by the commission, which looked into years of intelligence holdings, as well as an extensive examination of Qantas’ employee and contractor records. Intelligence is typically gathered by state and federal detectives in the field, phone taps, data analysis and human informants, and is used to form strategic assessments by the commission if considered reliable.

The reports of the infiltration of Qantas come in addition to revelations by the head of the commission, Michael Phelan, that Australia’s most dangerous and wanted crime bosses have organised themselves into a cartel earning an estimated $1.5 billion a year by smuggling drugs past the nation’s borders.

The commission says nine men drawn mostly from Australian bikie gangs and middle-eastern crime syndicates make up what the agency has named the “Aussie Cartel”. The cartel’s key Comanchero-linked members have connections to some of the suspected Qantas “trusted insiders” identified by Brunello.

Mr Phelan said if the stalled proposed airport and port security laws “aren’t passed today, there’ll be 225 people … who are not convicted of any offences, but have very close links to serious and organised crime”.

The report also warns that the COVID-19 pandemic may create further opportunities for crime groups to target Qantas and its staff. Even with declining overseas passenger travel, “the threat of trusted insiders in Qantas will continue to be very high”.

The findings raise serious questions about border security controls and legislative gaps, given repeated warnings dating back to 2003, when whistleblower Alan Kessing made allegations of serious compromises on Australia’s borders, supported by the 2005 Wheeler review.

Crime intelligence commission head Mr Phelan declined to confirm if Qantas had been infiltrated, but said his agency “works very closely with Qantas” and that several private sector companies were vulnerable.

Mr Phelan is backing proposed laws, supported by the government, that would enable criminal intelligence, rather than just existing criminal convictions, to be used when assessing if a person can work at sensitive airport and maritime sites.

Labor and some unions have previously expressed concern that the proposed port and airport security identification card laws are flawed and may unfairly target some workers based on unverified allegations. But Mr Phelan said the proposals, now before Parliament, relied only on highly reliable intelligence, and would be applied sparingly and be subject to appeal.

Late Sunday, federal Labor called for an urgent review of security at Australia’s airports, describing the allegations as highly disturbing.

Qantas security chief Mr Bramah said the airline had been “strong supporters of introducing intelligence checks” for all security cards and was pleased the federal government was working to get this through Parliament.

“In addition to the criminal checks that happen every two years, we’d like to see real-time background checks, which means airlines and airports know immediately if an employee has been convicted of an offence, because it’s another safeguard,” he said. “We have had positive conversations with the government about this over a number of years.”