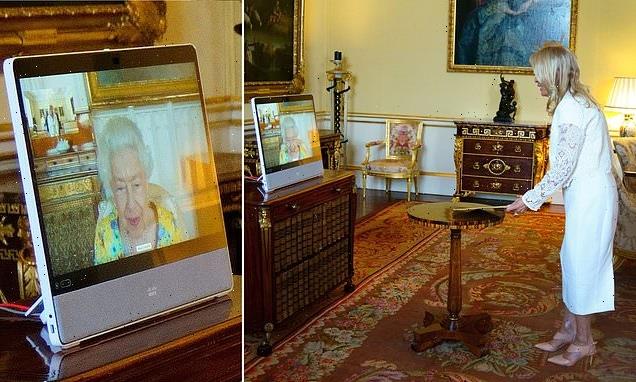 Keeping cool and carrying on! Queen continues with royal duties from Windsor Castle on UK’s hottest day as she welcomes new US ambassador Jane Hartley to Buckingham Palace during virtual audience

The Queen kept calm and carried on with her royal duties today as Britain faced its hottest day on record, with 40C-plus temperatures sparking travel chaos, fires and at least a dozen deaths.

True to form, the UK’s longest-reigning monarch, 96, soldiered on as she welcomed the new US ambassador Jane Hartley from the safety of Windsor Castle during a virtual audience.

The head of state donned a floral summer dress as she chatted on screen with the American diplomat, who presented her credentials at Buckingham Palace.

The Queen, who was seated in her Oak Room sitting room at Windsor, has in the past been pictured with a Dyson Pure Hot + Cool Link purifier fan at the Palace, and is also likely to also have one at her Berkshire abode.

Angela Kelly, the monarch’s senior dresser, has told how she opts for ‘light, dynamic fabrics that move and flow with the breeze’ for the Queen in the summer and ‘strong florals with vibrant colours’.

‘In warmer weather, I typically design with a more open neckline,’ she wrote in her book The Other Side of the Coin. 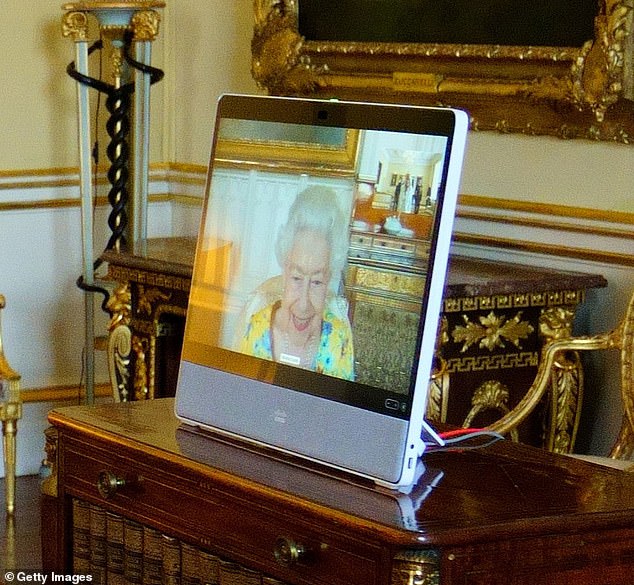 The Queen, 96, today donned a floral summer dress as she chatted on screen with the American diplomat, who presented her credentials at Buckingham Palace 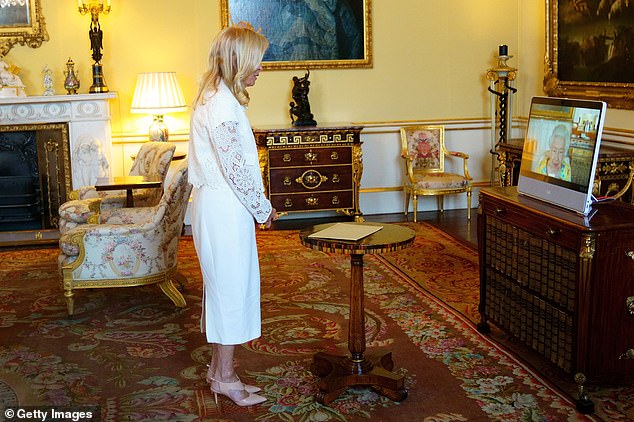 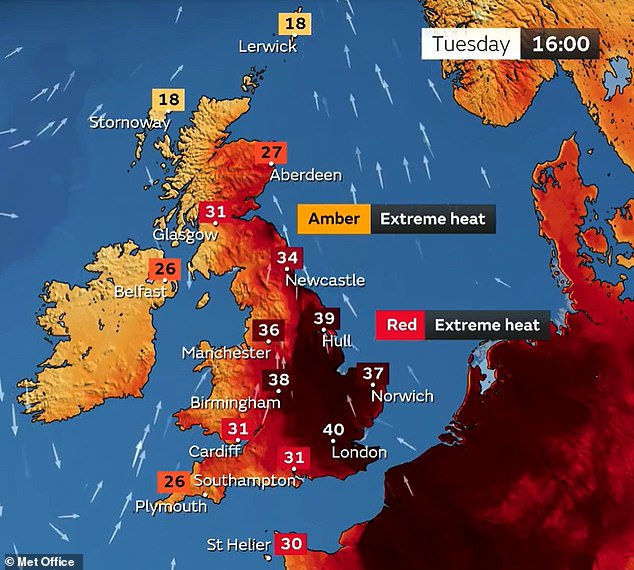 When dressing casually, the Queen often wears silk blouses or cotton shirts, and a skirt.

Royal servants will also be helping to keep the Queen’s dogs cool – her elderly dorgi Candy and two corgi puppies Muick and Sandy.

The Queen, who is facing ongoing mobility issues and is less than four years away from her 100th birthday, has increasingly turned to virtual engagements in recent times during and since the pandemic.

But she was out and about last Friday when she made a rare public appearance away from Windsor Castle to formally open the new £22m Thames Hospice building in nearby Maidenhead.

But she was wise to remain indoors today, in what has been the hottest day on record.

A huge grass blaze broke out in Wennington, East London, and has appeared to have destroyed at least two houses – while major fires also took hold of nearby land in Upminster and across the Thames at Dartford in Kent; on a day when millions of people were working from home. There was also a major gorse blaze at Zennor in Cornwall.

The extreme heat has been caused by a plume of hot air from north Africa and the Sahara and an ‘Azores High’ subtropical pressure system creeping further north than usual – which experts say is a result of climate change.

Forecasters said an absolute maximum of 43C (109F) is possible later on – and the highs in England are equal to the warmest spots anywhere in Europe today. The UK is also hotter than Jamaica, the Maldives and Barbados.

London Fire Brigade declared a ‘major incident’ in response to a huge surge in fires across the capital today as it came under ‘immense pressure’, with 15 fire engines and 100 firefighters dealing with the Wennington blaze alone.

The fire is believed to have started in grassland before spreading to nearby buildings close to a fire station. Aerial footage has shown smoke covering the village while nearby grassland and outbuildings continue to burn. 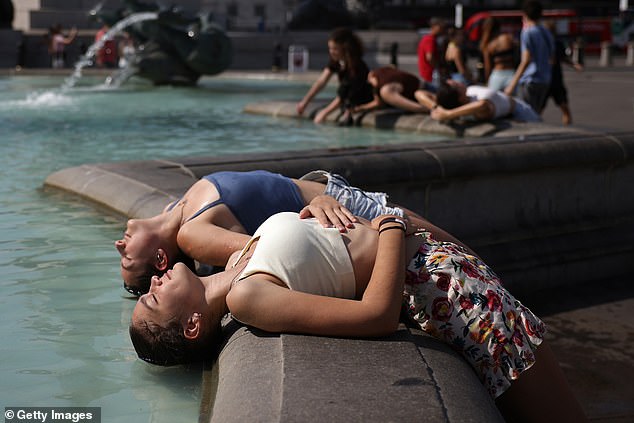 And smoke drifted over the M25 as almost 200 firefighters and 30 fire engines tried to extinguish a corn field blaze in Upminster. Firefighters in London said they were battling ‘several significant fires’.

Transport Secretary Grant Shapps told people across Britain today to ‘apply common sense’ and ‘depending on the nature of your journey and reason for it, you might want to consider rearranging your day around it’.

But the sight of parts of the UK shutting down sparked a backlash, with complaints that ministers and health chiefs were ‘acting like nanny’ – while holidaymakers were delayed yesterday as a part of runway at Luton Airport melted.

Today, the Supreme Court in London was closed to visitors because of the heat and an air-conditioning fault. A sign was posted at the building’s entrance explaining the problem, although hearings could still be viewed online.

But the extreme heat is likely to end with a bang tomorrow, with the Met Office issuing a thunderstorm warning for between 1pm and 9pm across the South East amid concerns of sudden flooding, lightning strikes and power cuts. Forecasters said up to 1.2in (30mm) of rain could fall in some areas in just an hour and 2in (50mm) in three hours.