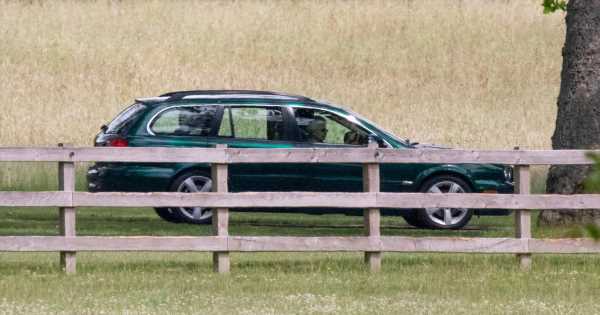 The Queen has travelled to Frogmore Cottage following the arrival of her grandson Prince Harry from the US, it has been reported.

Harry jetted to England on Friday and a spokeswoman for Harry confirmed the duke had arrived “safely” at his private residence Frogmore Cottage close to the Queen’s Windsor Castle home.

He has travelled to the UK ahead of the unveiling of his mother Diana, Princess of Wales’ statue – commissioned to honour her memory.

Harry landed in London having travelled from Los Angeles' LAX Airport at 12.38pm on Friday, June 25, after flying first class on his Boeing 777-323 American Airlines flight.

A dark VW van spotted on the tarmac was later seen arriving at the Windsor estate at 1.25pm.

According to reports, half an hour later the Queen left her residence at Windsor Castle and was seen driving in the direction of Frogmore Cottage

A source told The Sun: "It is quite something. No sooner had Harry been driven from Heathrow to Frogmore Cottage the Queen was on her way down.

"I'm sure they would have plenty to talk about. The Queen would obviously want to see her grandson after everything that has gone on and could take this opportunity to act as the peacemaker."

The Duke of Sussex will now isolate as he needs to provide a negative Covid-19 test before he can attend the unveiling of a statue for Princess Diana.

Diana’s sons will put their differences aside for the event on July 1, which will take place on what would have been their mother’s 60th birthday.

Kensington Palace has confirmed the royal brothers and Diana’s close family – thought to be her siblings – and others involved in organising the statue will attend the ceremony in the Sunken Garden at Kensington Palace.

A royal source said: "This is a small event and a very personal moment for the family.

"Plans have been scaled back due to the current Covid-19 restrictions and media arrangements reflect both the size and tone of the event."

Diana’s sons commissioned the artwork in 2017 – the 20th anniversary year of her death – to celebrate the princess’s life and legacy through the creation of a permanent statue.

The unveiling has been delayed, with the Covid-19 pandemic playing a part in the ceremony now taking place 60 years after the princess was born.

William and Harry’s troubled relationship is well documented, but their late mother will be their focus next Thursday as they commemorate her life.

In a statement when the project was announced, the royal brothers said: "Our mother touched so many lives. We hope the statue will help all those who visit Kensington Palace to reflect on her life and her legacy."

Among those attending the unveiling will be members of the statue committee, sculptor Ian Rank-Broadley who created the artwork, and garden designer Pip Morrison.

Harry lives in California with wife Meghan Markle and their two children and as America is on the UK Government’s amber list for Covid-19 he must quarantine for 10 days, but can end his isolation early under the test to release scheme if coronavirus tests taken on day two and five are negative.

Meghan has stayed at home in California with their son Archie and newborn baby daughter Lilibet.