Quick on one’s feet! The Queen, 92, almost stumbles on the steps of Westminster Abbey as she leaves RAF centenary service – but immediately regains her balance

The Queen appeared to lose her footing as she left Westminster Abbey following the RAF centenary service on Tuesday morning.

The 92-year-old monarch came close to stumbling as she made her way out of the abbey with the Dean of Westminster.

The Dean, the Very Reverend Dr John Hall, reached out his hand in concern but the Queen was able to steady herself without his help after pausing to regain her balance. 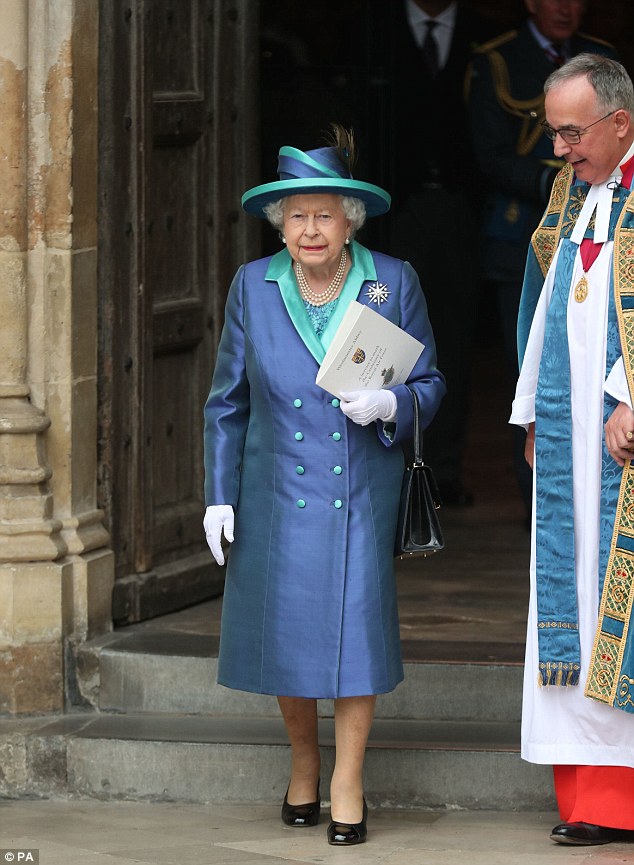 The Queen then walked down the steps of Westminster Abbey without any aide.

The service, which was also attended by the Prime Minister, marked the start of a busy day of engagements celebrating 100 years since the air force was founded. 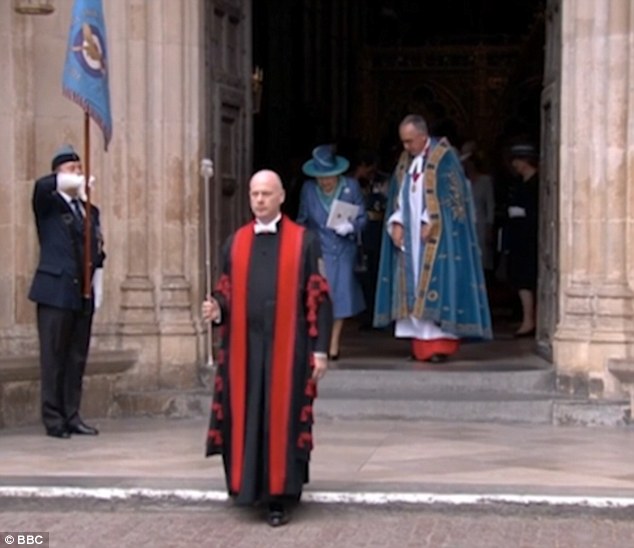 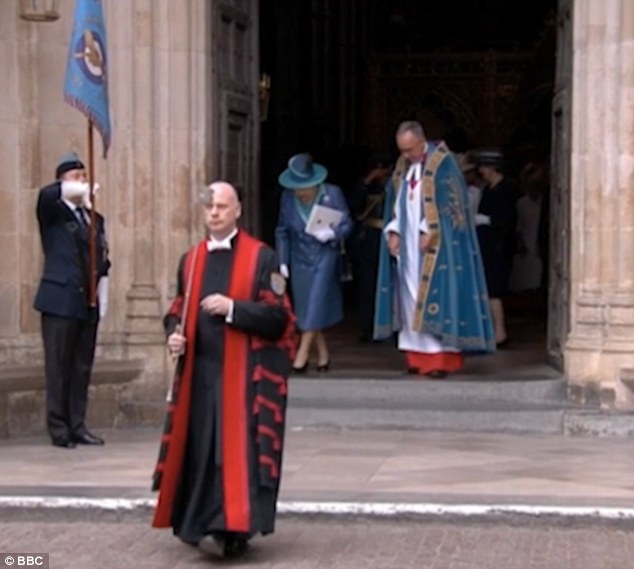 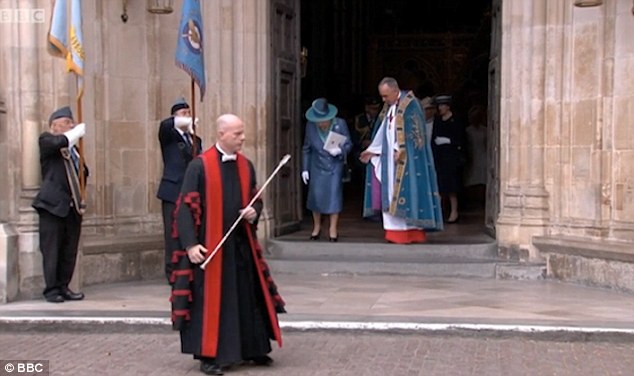 The Dean, the Very Reverend Dr John Hall, reached out his hand in concern, seen above, but the Queen was able to steady herself without his help after pausing to regain her balance

It was on April 1, 1918 that the Royal Flying Corps and the Royal Naval Air Service merged to create the RAF – the world’s first independent air service.

Despite still being on maternity leave, after giving birth to Louis only 11 weeks ago, it is understood Kate felt the celebrations were important to attend if she could, having also taken part in Louis’ christening yesterday. 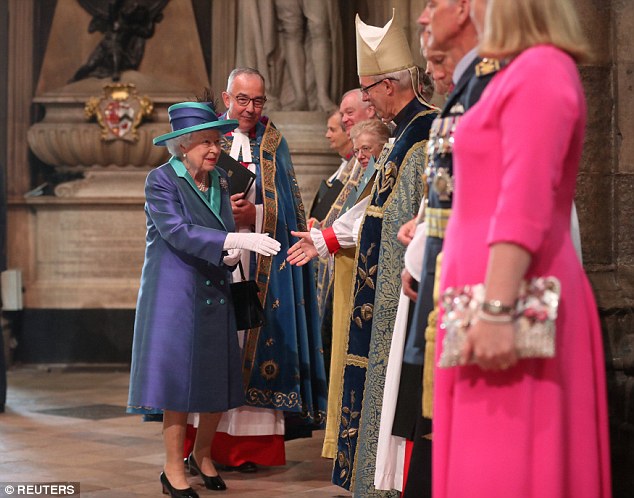 The Queen, 92, arrived for the service as she kicked off a busy day of engagements commemorating the RAF centenary 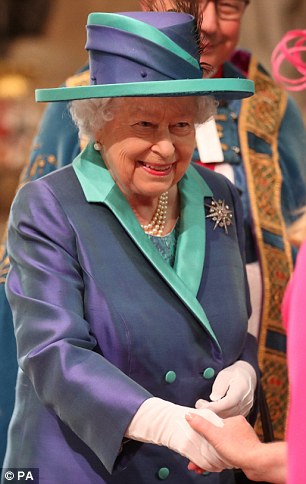 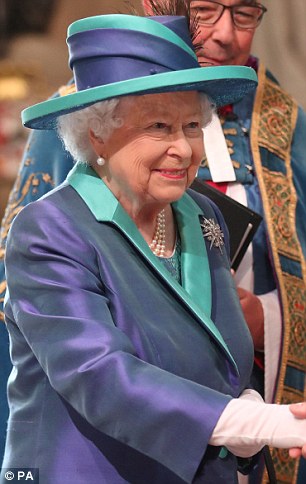 The Queen looked resplendent in a iridescent purple and teal coat, which she wore over a dress of similar colours 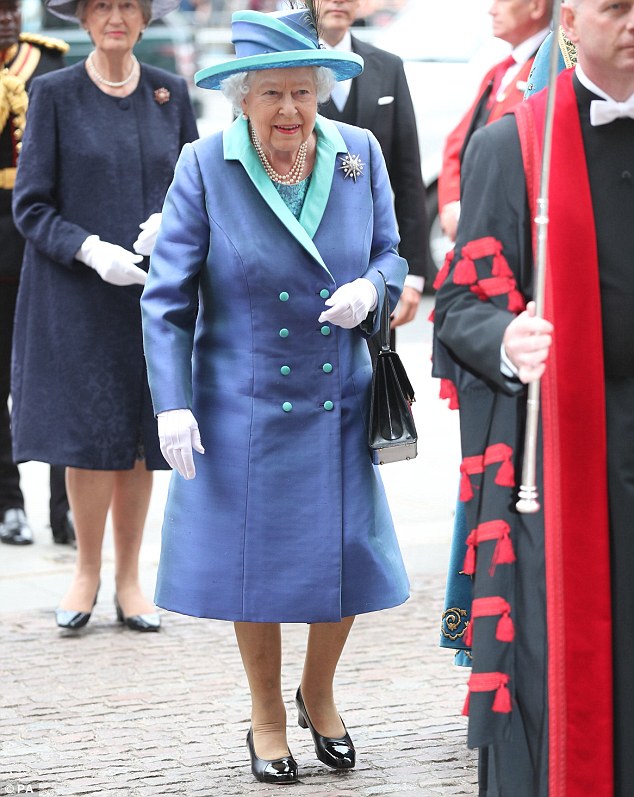 The Queen, 92, opted for a vibrant purple and teal creation as she led senior royals in the commemorative service

The Archbishop of Canterbury, Justin Welby, addressed the congregation and said the RAF has in its first 100 years been a decisive factor in serving the country, as well as being key in protecting democracy and freedom.

With an RAF ensign draped over the high altar behind him in the abbey, Mr Welby also highlighted how members of his own family have served and been killed in the RAF – drawing attention to his own father who flew low level sorties in Burma.

And amid turmoil in the Cabinet and her Government, Mrs May delivered a reading at the service, Hebrews 11:32-12:2, with the head of the RAF Air Chief Marshal Sir Stephen Hillier also taking to the lectern. 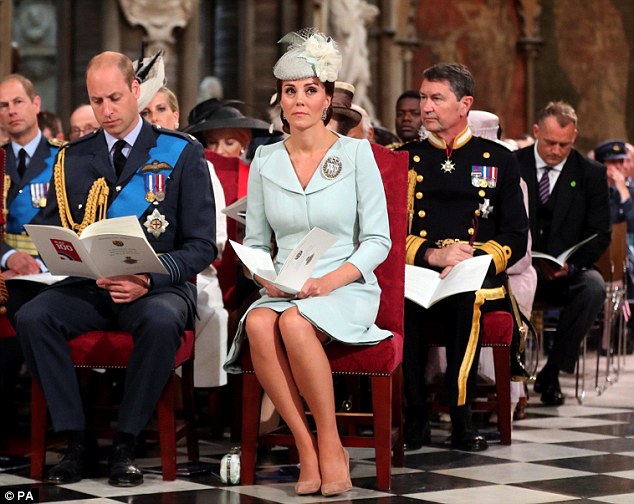 The Duchess of Cambridge, 36, looked elegant in a mint-coloured coat and matching hat for the occasion 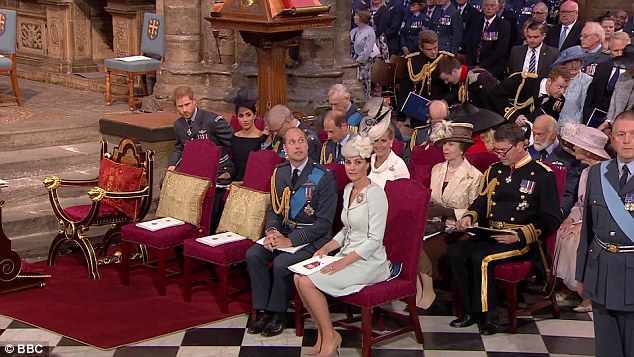 Prince William, 36, took a moment to admire the beauty of Westminster Abbey as he took his seat next to Kate. Pictured behind, left-right: the Duke and Duchess of Sussex, Prince Andrew, Prince Edward and the Countess of Wessex, Princess Anne, Vice Admiral Sir Timothy Laurence The newlyweds, who tied the knot in May, looked in excellent spirits as they took their seats ahead of the service 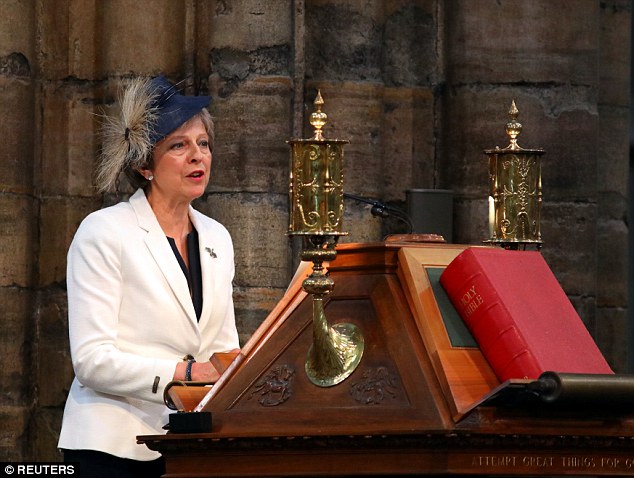 Prime Minister Theresa May was among those who spoke at the service. She wore an RAF pin on her lapel

Charles, William and Harry all chose to wear No 1 RAF uniform to the abbey, with Kate wearing a Dacre Brooch – which was presented to her by the Air Cadets when she took on patronage in 2015.

And in keeping with the traditional blue of the RAF, the Queen wore a royal blue silk coat with a turquoise collar and dress in the same colour, both by Angela Kelly, with a matching hat by Angela Kelly and a diamond star brooch.

Following the service at Westminster Abbey, the Queen will present a new Queen’s Colour to the RAF along with her son Prince Charles in the forecourt of Buckingham Palace, before she makes a brief speech. 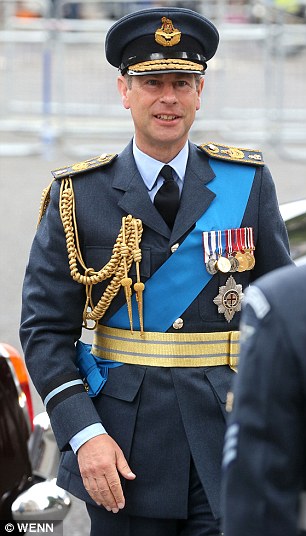 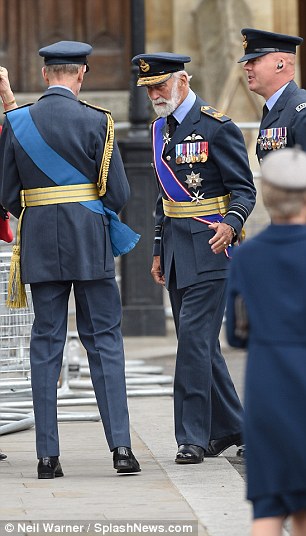 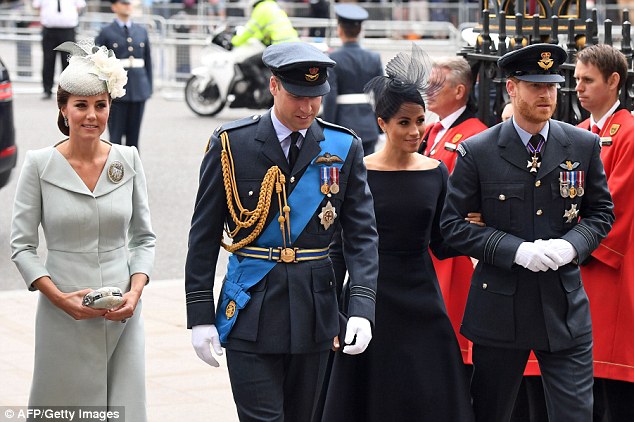 The royals will then appear on the balcony of the Queen’s London residence to view a flypast of up to 100 RAF aircraft, a parade of more than 1,000 personnel, and a feu de joie.

Up to 100 aircraft from Battle of Britain-era Spitfires and Lancaster Bombers to Britain’s cutting-edge F-35 stealth fighter jets will take to the skies from 12.45pm before thundering over Buckingham Palace 15 minutes later.

Thousands are expected to line the streets to catch a glimpse of the iconic flypast, while more than a thousand servicemen and women took part in a parade on The Mall.