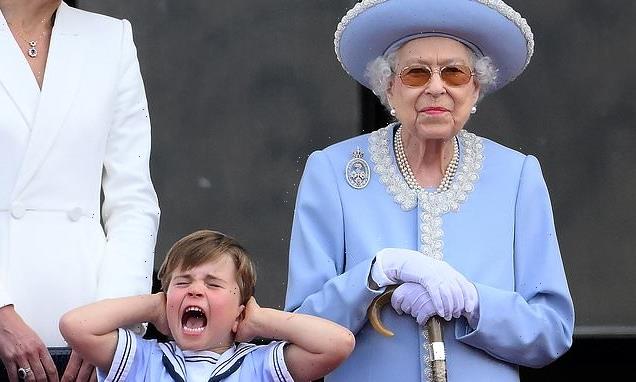 The late Queen has dominated the TV ratings this year with her funeral and the jubilee topping the most watched programmes of 2022.

A peak audience of about 28million tuned in to watch the funeral in September across a variety of channels, with BBC1’s coverage averaging 13.2million across the day.

Analysis of the top rating shows this year – not including news and sport shows – reveals the concert marking the monarch’s Platinum Jubilee in June, just months before her death, was the second most watched show of the year.

According to figures provided by Overnights.tv, the jubilee concert, called The Platinum Party At The Palace, pulled 11.2million viewers on BBC1. 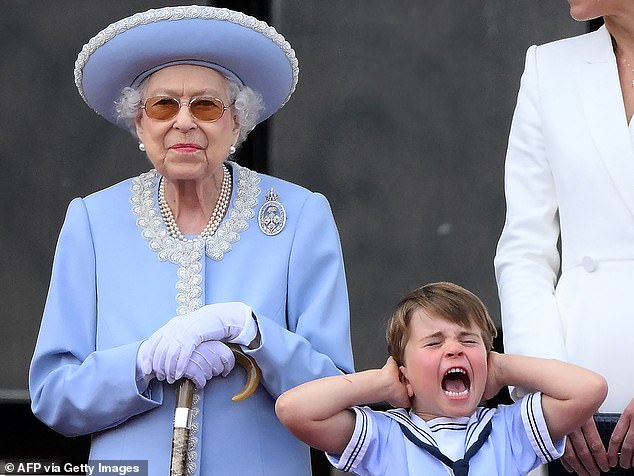 Pictured: Prince Louis of Cambridge holds his ears as he stands next to Britain’s Queen Elizabeth II to watch a special flypast from Buckingham Palace balcony following the Queen’s Birthday Parade, the Trooping the Colour, as part of Queen Elizabeth II’s Platinum Jubilee celebrations

The final of I’m A Celebrity….Get Me Out of Here!, which saw former health secretary Matt Hancock finish third as ex-England footballer Jill Scott was crowned champion, was in third place with 10.8million on ITV1.

An average audience of 19.4million tuned in to watch England and France in the World Cup last weekend on ITV, with a peak audience of more than 21million.

The audience for the England women’s team’s European victory over Germany in July hit a high of 17.4million.

This year’s Eurovision Song Contest which was energised by huge support for Ukraine following Russia’s invasion, as well as the popularity for the UK entrant Sam Ryder, was fourth in the list with 8.9 million on BBC1.

Strictly Come Dancing, which will finish this weekend, was fifth in the list with 8.7 million, with fellow BBC show Antiques Roadshow next with 6.6 million and ITV entertainment show The Masked Singer in seventh with 6.5 million.

News events surrounding the Queen’s death also brought in millions with the News at Six on BBC1 on the day of the Queen’s funeral getting 8.6 million or a BBC News special on the day of her death watched by 6.3 million.

For 2022, excluding sport and news output 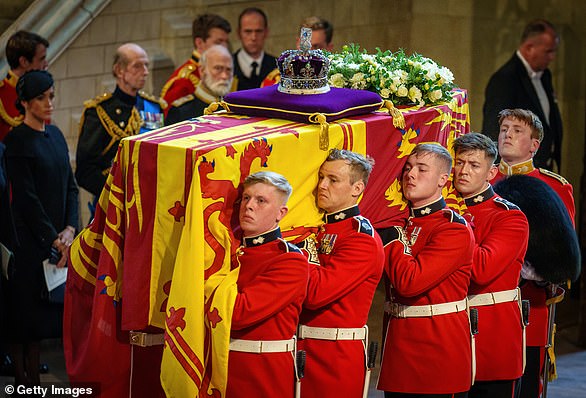