Thanks to these two straight-talking TV chefs, my molars started to ache: QUENTIN LETTS sees Jamie Oliver forgo the nanny-knows-best tone of the political class to speak bluntly on Britain’s obesity crisis

One should probably say ‘childhood obesity’ but the thing about Messrs Oliver and Fearnley-Whittingstall is that they speak clear, direct English unmottled by the euphemism and jargon we hear from the political class.

As a result, they were highly effective in pressing the case for political action against junk food. 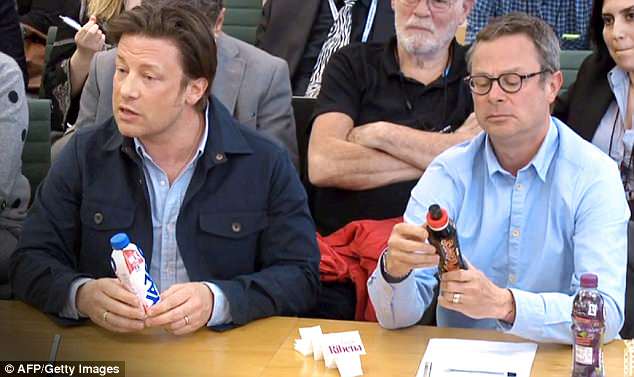 Mr Oliver, hands in trouser pockets, trailed a flunkey who set up visual aids on the witness table: plastic bottles that once contained Ribena, Lucozade and Yazoo and Mars milky drinks. In due course he used these to show how many spoonfuls of sugar go into each bottle. I felt my molars starting to ache.

At first sight TV’s Jamie looked like David Cameron run to seed. Was there also a touch of Reg Varney (of ‘On the Buses’ fame) about him? He was having a bad hair day. His friend Hugh had his shirt tails untucked. Typical Etonian. He was more slim than Jamie and had a better command of detail. He was a little angrier, too, in a good way. They were both bubbling. A prolonged, steaming simmer.

Should politicians interfere to stop our children becoming such bloaters? I normally subscribe to small government yet this area has me wobbling. Some food and drink manufacturers produce the most terrible tooth-rot and market it cynically. The ensuing fatness crisis costs the NHS a fortune and will wreck the lives of youngsters, mostly from poorer families. 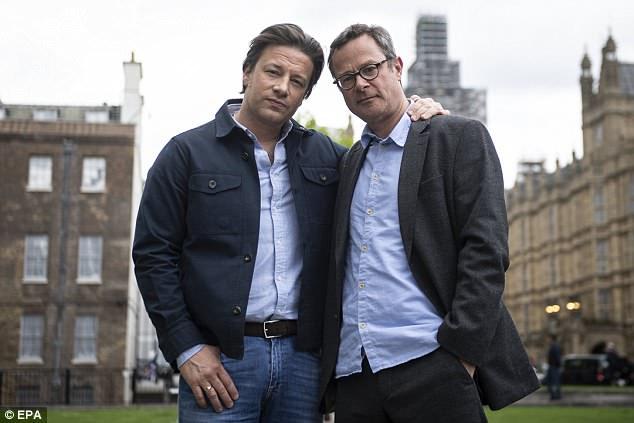 Being a small-stater need not mean you never support necessary social intervention. And yet, when you hear normal political people talk about obesity, it doesn’t half make you bridle.

Before the TV chefs arrived we had endured a session of the most grinding tedium from a line-up of professional lobbyists. They included a shouty Dr James Nobles from Leeds Beckett University, uttering seamless management-speak. What a dullard he was, boasting about how ‘we’ve sculpted a six-phase process’ and how we should ‘keep obesity as a burning-platform issue’. It needed a ‘whole-system approach’ with ‘route-maps’ and ‘traction’ and ‘best practice’ for ‘weight management services’. Gas gas gas, went this Nobles bloke, murdering the English language.

He was watched with simpering, rapt attention by Kieron Boyle, chief executive of some charity and a schmoozer at the Design Council. Comrade Boyle was also once ‘head of social investment’ at the Cabinet Office and a ‘young global leader’ at the Davos Economic Forum. An oiler. He spent the whole time nodding, emoting, radiating moist agreement. The more I watched these numpties, the more I recoiled from the idea of political intervention on obesity.

But then we had Jamie and Hugh. The meeting was given an immediate jolt, not because they were famous telly presenters but because they spoke normally and did not flavour their voices with a ghastly nanny-knows-best tone. Mr Oliver said Brexit would enable the Government to make our food labelling more informative. He spoke bluntly about Theresa May and her aides but he enthused about the recent sugar tax. Though he did not much like taxes (which multi-millionaire businessman does?), the sugar tax was ‘a tax for love’ and it had quickly forced drinks makers to cut the sugar in products. 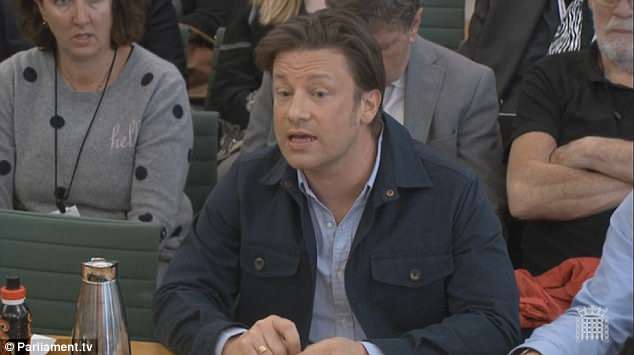 ‘Children are not put on earth to eat burgers and nuggets,’ he thundered. Mr Fearnley-Whittingstall preached insistently about fresh vegetables. Less than 1 per cent of food adverts are for veg, he said, even though they were the ‘life-giving foods’. Compare that to ‘the avalanche of junk food advertising’.

Mr Oliver said maybe Tony the Frosties Tiger should promote greens. ‘This is a national security issue,’ cried Jamie at one point. Over the top? Possibly. But Hugh claimed that we spend more on treating type-2 diabetes than we do on the fire service or the judiciary.

There was an element of showmanship, admittedly. Did Jamie Oliver seem a bit pleased with himself? Maybe. But they were cooking with conviction.