Home » World News » ‘Quite a drop!’ Carol Kirkwood warns mercury to fall to 22C ahead of ‘warmer weekend’ 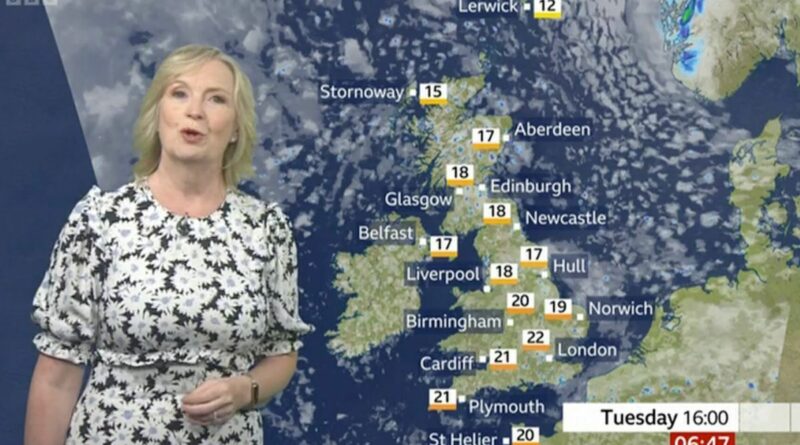 BBC Weather forecaster Carol Kirkwood warned temperatures are expected to fall between 12C to about 22C degrees Tuesday and Wednesday due to “high pressure and a weak weather front” set to build in from the west and northern England. As we head into the end of the week, however, the high pressure is expected to move further east, resulting in an overall “warmer” weekend for the UK.

“Last Tuesday, we hit over 40C degrees, so quite a drop.

“For some of us, as we go through the next few days, there will be some sunshine around.

“There are some showers in the forecast. 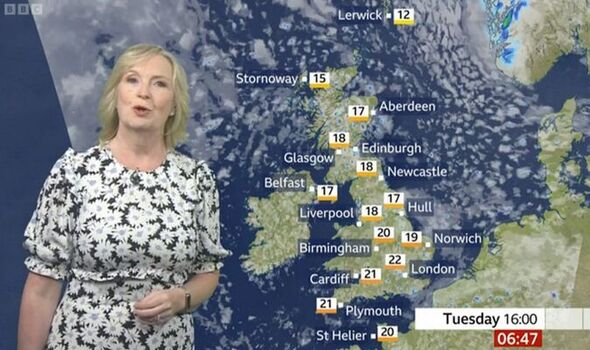 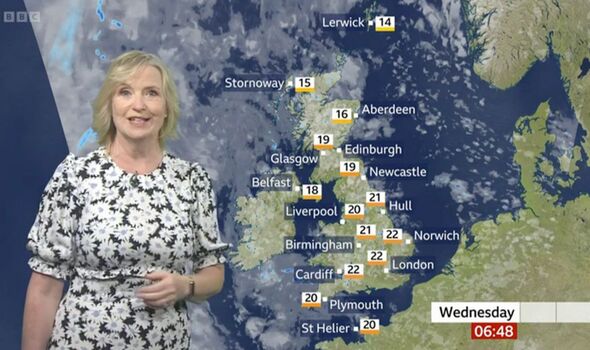 “It’s going to be a little cooler until it starts to warm up again as we head towards the end of the week, and also the weekend.

“We’ve got this ridge of high-pressure building in from the west.

“We also have a weak weather front drip from northern England towards the southeast, producing some showers.

“The cloud associated with this weather front results also in some drizzle around this morning.

“One or two showers peppering the southwestern Wales, but it’s going to be a mostly dry day with some sunshine

“Some sunshine across central and southern Scotland, but for northern Scotland we will see some showers with sunshine in between.

“It’s the same for Northern Ireland, a few showers with some sunshine in between.

“Winds not as strong as they were yesterday and continuing to ease across the Northern Isles as we go through the say. 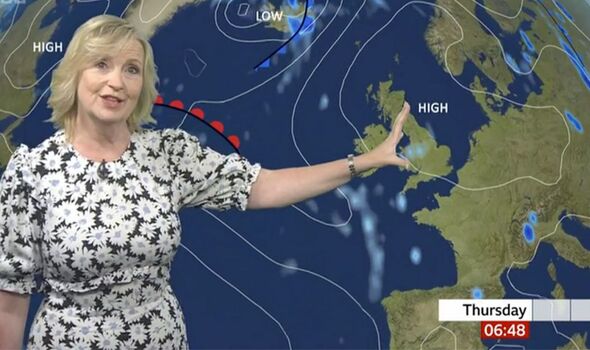 “Through this evening and overnight, there still will be a few showers.

“It will be cool with temperatures generally 11C to about 14C degrees.”

As we head into Wednesday, she forecasted: “Dry for most, there will be some showers but they will be fairly light and isolated.

“Through the day the cloud will start to build and we will see some more showers coming in across the southwest.

“Temperatures 14C to about 22C degrees.”

Moving into overnight and Thursday, she warned: “High pressure drifts further east, the air around it in a clockwise direction starts to suck up milder conditions from the new continent.

“Because it’s drifting further east, it’s going to align some weather fronts across the north and the west, it’s getting a bit warmer”.

READ NEXT:
Brexiteer savages ‘nutters from Brussels picking fights’
Truss to pull rug from under unions and forge new emergency law
‘Arrogance and hubris is staggering’ Meghan savaged over move to US
Queen has NEVER lived in most important home due to Princess Beatrice
‘Poison running in blood’ Harry sparks fears