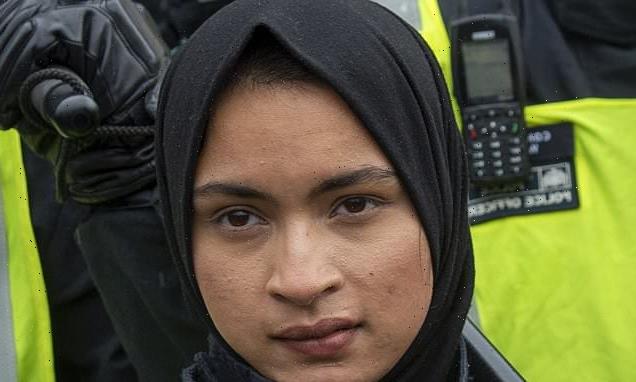 Revealed: Muslim policewoman who posted racist messages on social media and was in touch with female jihadi knew that she couldn’t  let ‘anyone at work’ see her tweets

A Muslim police officer facing investigation for tweeting racist messages once admitted that her employer found her views ‘extreme’.

Ruby Begum, 26, posted the comment when she worked for a market-research company.

The Mail on Sunday revealed last week that Ms Begum used Twitter in the months before joining the Metropolitan Police to insult Jews and mock the 9/11 terror attacks.

She was also in contact with a suspected female jihadi in Syria.

She frequently used the offensive term ‘kuffar’ to describe non-believers, writing in July 2014: ‘Kuffar lips have been all over my mug there is no way I’m using that thing again.’

Elsewhere, she referred to Pakistanis as ‘p***s’.

Ruby Begum (above), 26 – a Muslim police officer hailed as a role model for bravely confronting anti-lockdown protesters – was facing an urgent investigation after it was revealed she tweeted a torrent of racist messages and was in regular contact with a suspected female jihadi in Syria

As Scotland Yard faced questions over how her rants (example, above) were missed during vetting, it emerged she communicated over many months with a woman thought to have fled Europe in 2014 to live under the Islamic State’s so-called caliphate

Miss Begum – who works for the Met’s Taskforce, a division which deals with public order – has been running a Twitter account under the name Ruby Beees since 2012, posting more than 25,000 messages

This newspaper can now reveal that when urged by a friend to switch the settings on her Twitter account from private to public 18 months after becoming a police officer, Ms Begum replied: ‘I can’t have anyone at work find me.’

Later, however, she did make her tweets publicly accessible.

She ran her account under the name Ruby Beees, posting 25,000 messages.

Photographs and film of the petite officer wearing a hijab on the front line went viral last year, with senior colleagues calling her inspirational.

But after being alerted by The Mail on Sunday, the Met launched an investigation and referred the matter to the Independent Office for Police Conduct.

Ms Begum has now been placed on ‘restricted duties’. Most of her antisemitic comments were made in 2014, when Israel launched a ferocious attack against the Palestinian militant group Hamas in the Gaza Strip.

Ms Begum wrote: ‘Dirty Zionist. Jahannam [hell] is awaiting.’ In another tweet, she wrote: ‘Israel have no limits. Scumbags I can’t wait for the day they get severely punished.’

Later that year, she said: ‘Zionists have no hearts! They’ll get what’s coming to them subhanallah [glory be to God].’

In a tweet from 2014, she wrote: ‘Don’t like being private but my company thinks I have extreme views.’

The Met said in a statement: ‘There is no place within the Met for any racist, homophobic or otherwise hateful attitudes and officers and staff can expect robust action should they be found to hold or express such views.

‘The information provided by The Mail on Sunday regarding a constable’s social media posts is concerning and is being treated very seriously.’