The RAF could be called in for a a massive coronavirus rescue mission to bring stranded Britons home this week, it was claimed today.

Foreign Secretary Dominic Raab is expected to announce a huge repatriation effort as early as tomorrow amid mounting fears over safety.

RAF voyager transport planes could be deployed to bring UK citizens home from places such as India and Peru, where conditions are thought to be deteriorating.

The government has been urging against all foreign travel and for people to make their own way back for more than a week, but many have found it difficult to get tickets.

So far the government has only chartered a few British Airways flights to evacuate the most vulnerable Britons. It is not clear how many are abroad in total, as numbers are not routinely tracked.

One government source told the Sunday Times that Mr Raab was not yet ready to launch a full-scale military evacuation, but said RAF Voyager transport could be involved.

One said: ‘Our priority is commercial flights but we do not rule out exceptional means if necessary.’

The latest effort emerged after British Nationals stuck in India said their plight is becoming ‘desperate’, with some claiming they have faced police brutality while attempting to get food and medical supplies. 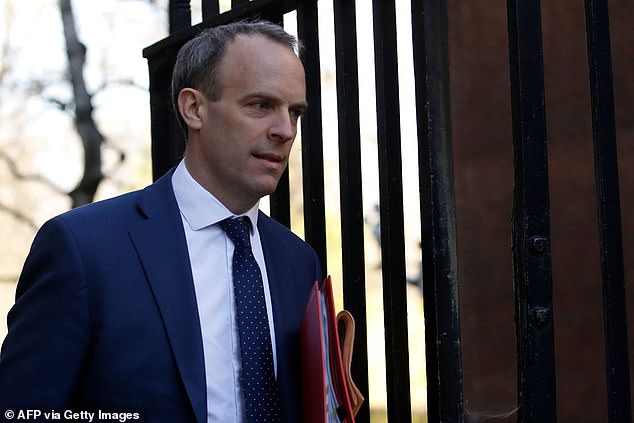 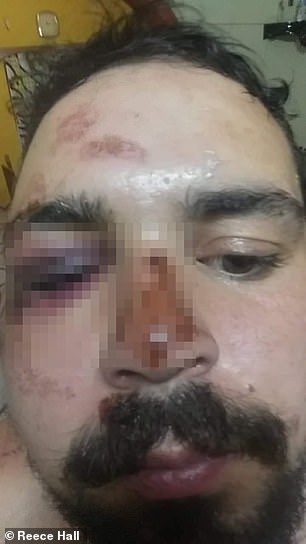 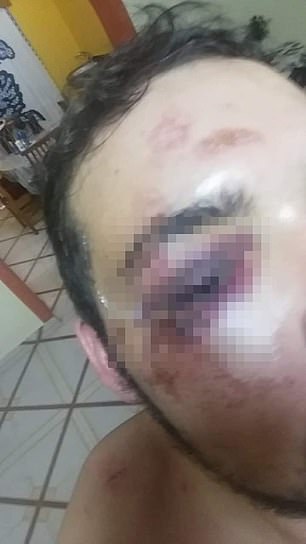 Reece Hall, 24, from Cornwall, fell victim to a mugging and serious assault on February 26 in north Goa, leaving him with a fractured jaw, eye socket and leg injury, now severely infected 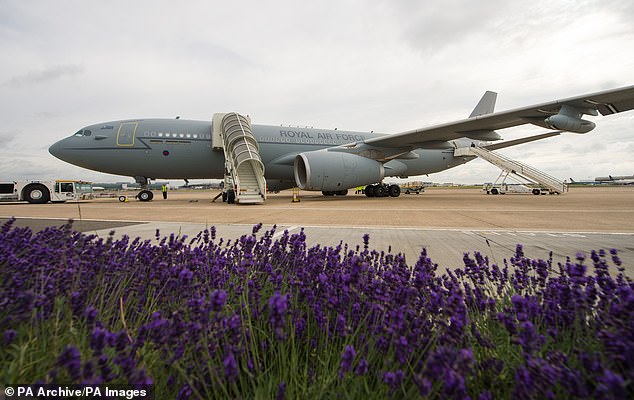 RAF voyager transport planes like this one (file picture) could be deployed to bring UK citizens home from places such as India and Peru, where conditions are thought to be deteriorating

Reece Hall, 24, a ground worker from Cornwall, fell victim to a mugging and serious assault on February 26 in Titos Lane, north Goa, leaving him with a fractured jaw, eye socket and a leg injury, which has now become severely infected.

Unable to leave his accommodation for regular treatment due hostility towards tourists and strict government lock down measures, in place since Wednesday, Mr Hall’s open leg wound, which was caused when three muggers pushed him from his bike, is now badly inflamed.

Mr Hall said: ‘I’ve been avoid going outside ever since seeing videos of people getting beaten up and hearing stories from foreigners who have been beaten, (…) my leg is not looking good at the moment’.

‘I’m desperate to get a plane ticket home but it’s gone past the point of trying to get one now as they are all cancelled, all we can do is contact government officials. I’m surviving off one meal of rice a day.’

As all flights from the country have been grounded until April 12, thousands of British Nationals left stranded across India are now relying on the UK government to put in place repatriation flights – which have so far been limited and fully booked within minutes of being announced.

British Nationals have been advised by the Foreign and Commonwealth office to comply with local rules during lock down, with talks of quarantine areas to be set up for foreign nationals.

A 21-day lock down was announced by Prime Minister Narendra Modi on Wednesday causing the immediate closure of shops, restaurants and many hotels.

Heidi Hawkins, 49, a carer from West Sussex stuck in south Goa, said: ‘The supermarket was rumoured to be open and it was heaving, no social distancing, every man for himself. The police just came along and started smacking people with their sticks. So people are too scared to go out for food. When you hear of a shop that’s open you’re too scared to go there because of the police brutality. We just need food and water and we’ve been left with no information.

‘I went to the police station in Colva to ask for information and the police threatened to put me behind bars. I was laughed at and ridiculed.’

‘At home i’ve got my 22-year-old daughter who is highly anxious alone with her eight-week-old baby, her four-year-old daughter and my 19-year-old disabled daughter. She’s been stuck inside without food. While my 19-year-son, who is severely disabled is in an assisted living house and he is desperately homesick and doesn’t understand. I am desperate to get to him and take him home. I need to get home for my babies, they need their mum.’

British National, Lyn Davis, 60, who is also stuck in Goa and has been visiting the region for almost 20 years, claims she was assaulted by police in the area with a bamboo baton for leaving her hotel to collect medication she had ordered the day before.

Heidi Hawkins, 49, a carer from West Sussex (pictured with her grandchild) is stuck in south Goa and said she is afraid to go out for food due to police brutality 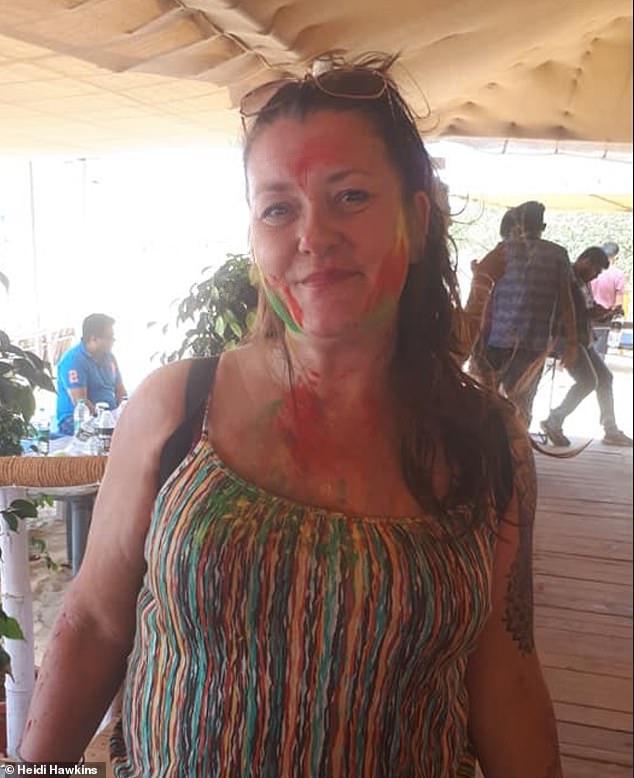 Ms Hawkins in Goa before the lock down, she is now unable to source food and said she has had no contact from the Foreign Office

Mrs Davis said: ‘Went to the chemists in Candolim this morning (…) police were very aggressive at Calangute roundabout. We tried explaining that we had ordered medication but the police woman hit me hard on the bottom with her stick, had my phone in my hand and told her that was assault.

‘They carried on shouting and waved us through, also as we were coming up to them you could see her getting ready swinging her stick around. I’ve been coming to India for nearly 20 years, do I want to come back? Not so sure now.’ 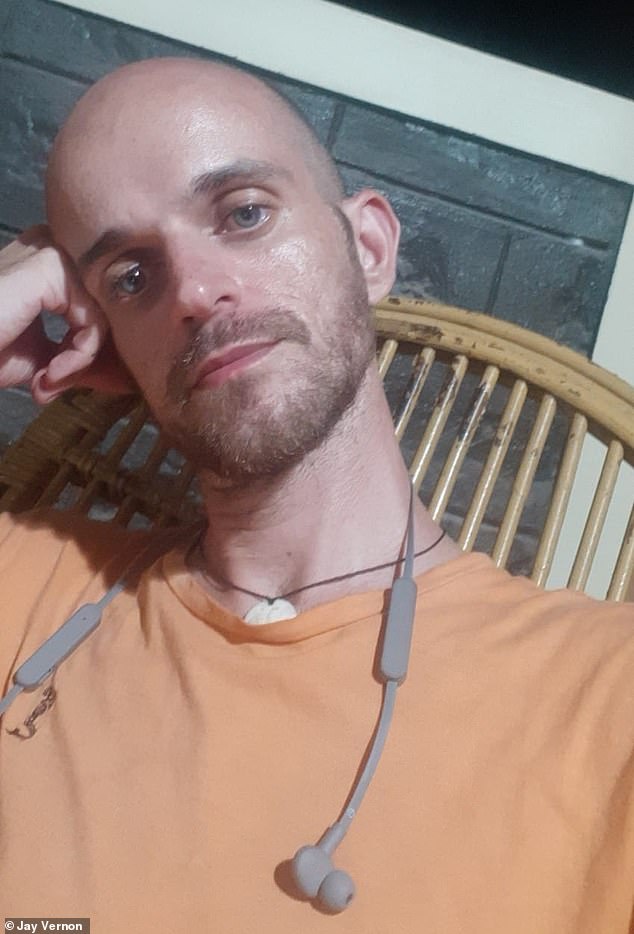 Jay Vernon a yoga teacher from Brighton is currently stuck in Varkala, Kerala. He said he is yet to hear back from the Foreign Office

Jay Vernon a yoga teacher from Brighton is currently stuck in Varkala, Kerala, after having two flights he had booked cancelled and no response from the British Embassy.

Mr Vernon said: ‘My two flights have been cancelled and no one has yet to reply from the Embassy. Locals are not wanting to associate with me because I’m from Europe. I still can’t understand why the Indian government doesn’t allow us to leave and their own citizens back in the country.’

Since the 21-day lock down was announced on Wednesday by Prime Minister Narendra Modi thousands of people, mostly young male day labourers but also families, fled their New Delhi homes as the measure effectively put millions of Indians who live off daily earnings out of work. 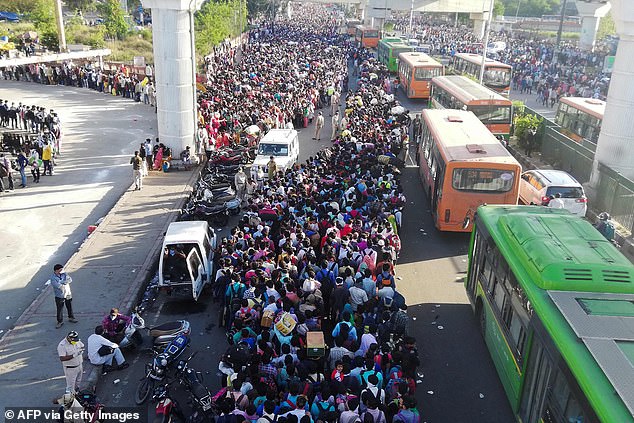 Migrant workers and their family members lineup outsdie the Anand Vihar bus terminal, New Delhi, yesterday to leave for their villages during a government-imposed nationwide lockdown 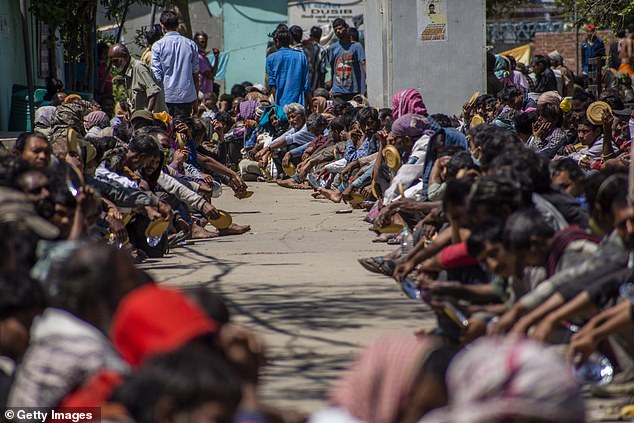 Mr Modi said the extreme measure was needed to halt the spread of Covid-19 in India, which has confirmed 775 cases and 19 deaths, and where millions live in cramped conditions without regular access to clean water.

India’s finance ministry announced a 1.7trillion (£18billion) economic stimulus package that will include delivering grains and lentil rations for three months to 800 million people, around 60 per cent of the world’s second-most populous country.

But thousands of India’s most vulnerable, who fear dying not of the disease caused by the new virus but rather of starvation, have decided not to wait. 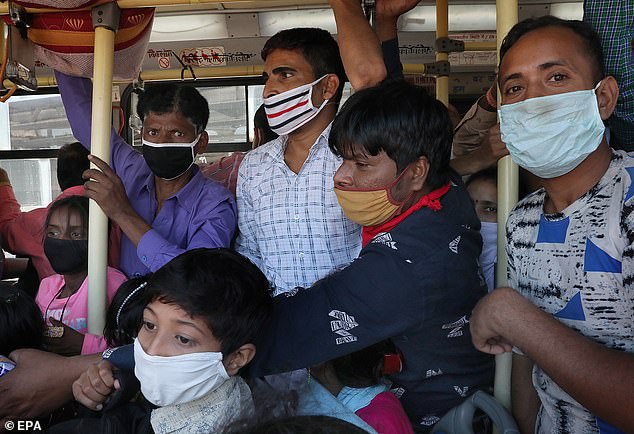 Mainly labourers who are stranded on the border districts travel in a bus at the Delhi, Uttar Pradesh boarder near New Delhi, 28 March

Former civil service worker Esther Hulme, 25, from Leeds said she was thrown out of two hotels with her partner in Goa, India, as fears grow that tourists may carry coronavirus.

Ms Hulme, who was on a year-long round-the-world-trip said: ‘I feel completely and utterly abandoned. I am relying of the good nature of strangers to provide support that we have not been able to get from our own country.

‘We have been ask to leave two properties because of the risk they believe we pose, the latest accommodation asked us to stay indoors all times because they didn’t want to enrage the neighbours, we even had to leave our money to pay for the apartment in a separate store room where it would be collected because nobody wanted contact with us.’ 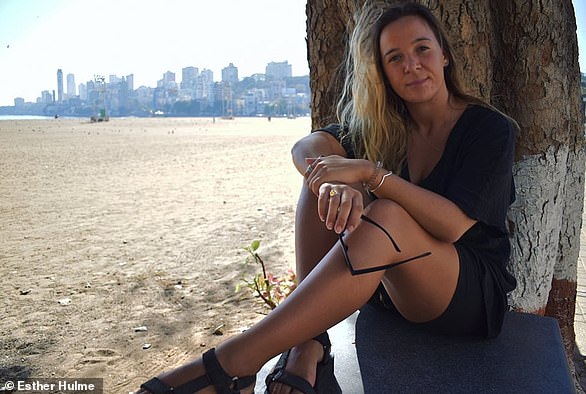 Former civil service worker Esther Hulme, 25, from Leeds said she was thrown out of two hotels with her partner in Goa, India, as fears grow tourists carry coronavirus

‘I have called the embassy every day for the last three days. I was told ‘money talks’ on one occasion. On another occasion I explained we were to be on the street without any certainty of shelter, they responded they don’t help with accommodation… I had to spell it out to them that I was scared for my safety.’

Adding: ‘Now the armed police have now been deployed in Goa, it’s created further uncertainty amongst stranded tourists, we are concerned about what this may mean.

‘I am worried that we are at the whim of authorities we are not familiar with, although we have been told we can leave for emergency supplies I am hesitant in fear of our safety.

‘Especially because of the already reported brutality of the police. I will rely on locals for guidance.

‘I have contacted the embassy for guidance but they haven’t been in touch neither is there an update on FCO site that provides guidance regarding this development.’ 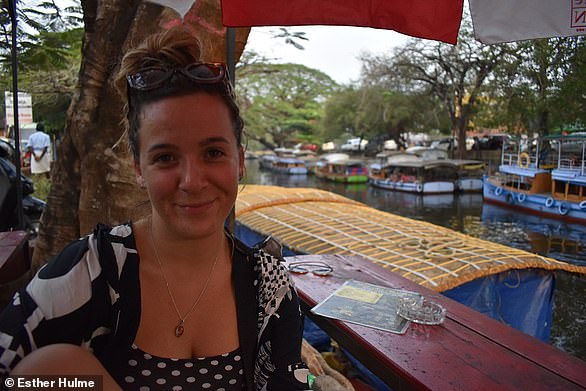 Ms Hulme travelling India before the lock down and coronavirus fears