Rafina: The 26 bodies were found huddled together, in a last embrace. The group, many of them children, had been driven to the sea in an attempt to escape the Greek wildfire, only to be engulfed yards from the shore.

"We assume they became trapped by the fire because it was so strong and so fast," Haris Malimagolou, from the Hellenic Red Cross, said in the resort of Mati. "Some were huddled together as if trying to protect each other. They were badly burned and have not been identified." 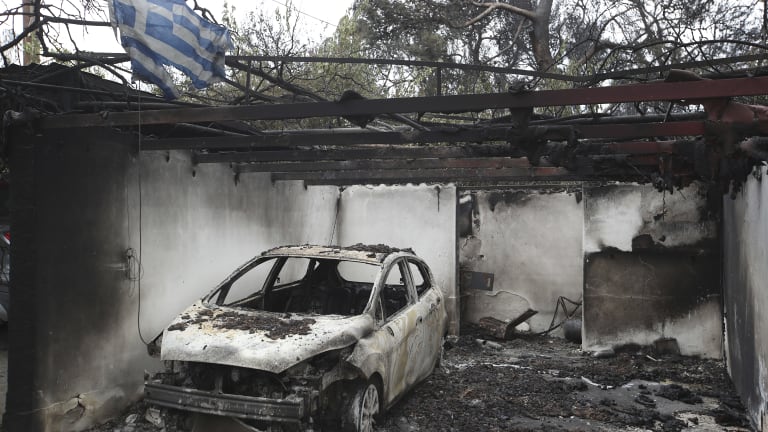 A Greek national flag flutters over the charred remains of a burned-out car and house in Mati.

The official toll from the "biblical disaster" stood at 74 on Tuesday night, but was ex

pected to rise. Survivors described their efforts to escape, amid mounting anger at the lack of resources to tackle the blaze and to warn locals and holidaymakers.

Paulina Corvisier, 25, from Lyon, on holiday in a villa in central Mati, fought back tears as she displayed cuts and bruises sustained while scrambling over rocks to escape.

She said: "We ran to the beach. We were all crowded on to the sand and rocks. Then all the trees surrounding the beach burst into flames. I jumped in the water because I didn't know what else to do. Ash was falling on me from the sky while I was in the water."

She questioned the lack of official help for the victims of what was being seen as a wildfire more deadly than one in 2007 that killed 77 people.

"We were not informed and were not evacuated," she said. "There was a big lack of communication."

Kostas Laganos, another survivor, said: "We went into the sea because the flames were chasing us all the way to the water. It burned our backs. 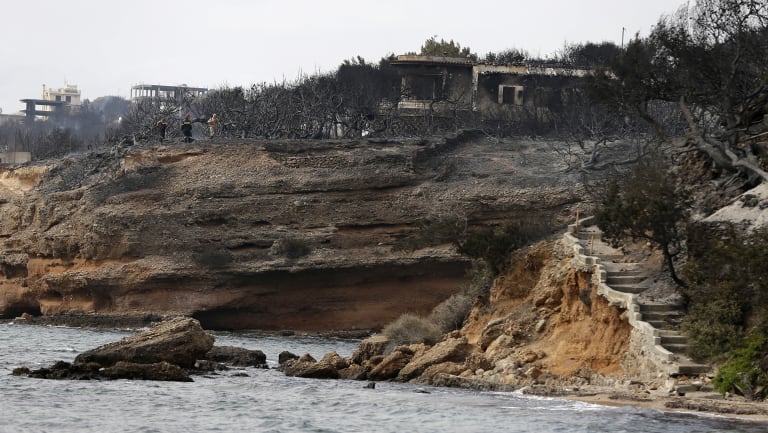 Firefighters stand on a cliff top where burned trees hug the coastline in Mati east of Athens, Tuesday.

"It reminded me of the eruption at Pompeii. It was terrible."

The fires, which hit four separate areas of Greece, began on Monday morning in Corinth. But by far the worst hit was Mati, a small town in the eastern region of Rafina, popular with young Greek families and pensioners.

Hundreds of people were rescued by boat after roads became blocked by the fire and by burning cars. Several bodies were recovered and more than 700 people were taken to the port of Rafina. 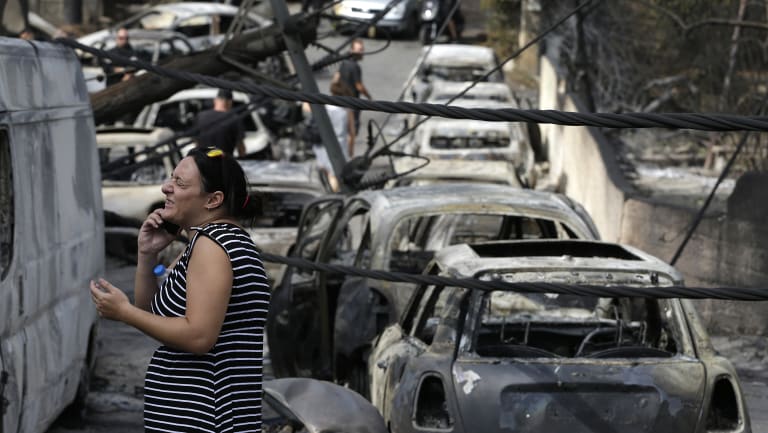 A woman stands amid the charred remains of burned-out cars in Mati.

"Mati no longer exists," said Evangelos Bournous, the mayor of Rafina. More than 1000 buildings and 300 cars were damaged, the village turned into a smouldering wreck.

Greek authorities were quick to call for EU assistance soon after the fires were reported. Countries including Cyprus, Spain, Turkey, Italy and Germany, offered support. Jean-Claude Juncker, the European Commission chief, tweeted that the EU "will spare no effort to help". But firefighters in Greece have long been warning that austerity measures imposed by Europe and the IMF meant they were ill equipped for a major incident. 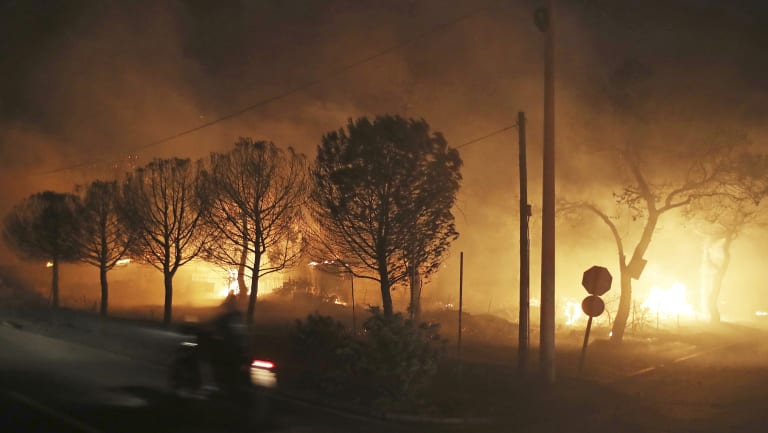 Buildings burn in the town of Mati.

Panos Kapatis, the vice mayor of Rafina, said fire and rescue arrived promptly but the dense pine forests around Mati were highly flammable.

Panos Skourletis, the interior minister, described the wildfires as "biblical" and said rescue workers were "still searching to see if there are more missing", while Mr Bournous warned: "The number of dead is rising."

Stavroula Malliri, a fire department spokesman, said 156 adults and 16 children had been taken to hospital, 11 of whom were in a serious condition. The UK Foreign Office confirmed three Britons had been caught up in the fires, with one hospitalised.

Giorgos Ennios-Eros, 28, who lives in northern Rafina, said he felt the area could have been better secured against wildfires, which were common in Greece during the summer. "We should cut down some of the trees to stop it happening again. But the area is protected, so cutting down trees is not permitted."

Alexis Tsipras, the country's prime minister and leader of the Syriza party, declared three days of national mourning but added: "We mustn't let mourning overwhelm us, because these hours are hours of battle, unity, courage and above all of solidarity."

No Australians are believed to be among the dead.

"The Australian embassy in Athens has confirmed with local authorities that no Australians are known to be affected by forest fires near Athens at this time," a spokesperson for DFAT said.

"The embassy continues to monitor the situation closely."