London: The UK is hoping to roll out rapid turnaround pregnancy-style tests that could be used by the entire population on a daily basis to tell whether they are infectious with COVID-19.

Prime Minister Boris Johnson said if a trial was successful, it could lead to a "freedom passport," enabling the non-infectious to attend mass events like indoor theatres.

He said the tests would not tell whether a person was infected but whether or not they were capable of spreading the virus. 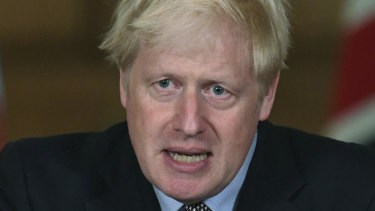 Johnson said that if the logistical and production challenges could be overcome, people could test themselves in the morning with a saliva sample or swab or swab test and know within minutes whether they were capable of spreading the disease.

'That gives you a kind of passport, a freedom to mingle with everyone else who is similarly not infectious, in a way that is currently not possible," the prime minister told a news conference at Number 10 Downing Street.

"That's the opportunity and we're aiming for that, we're driving for that."

"I'm still hopeful … that in many ways we could be able to get some aspects of our lives back to normal by Christmas."

However, he cautioned: "we cannot be 100 per cent sure that we can deliver that in its entirety."

He said that until the scheme, yet to be trialled, was ready, Britons would need to curb their socialising to groups of no more than six, to control a steady upturn in coronavirus infections recorded across the UK in recent days. Previously, the limit on gathering was 30 people.

The UK recorded another 2659 cases of coronavirus on Wednesday – completing a several-day streak of new cases exceeding 2000.

The cases are primarily amongst people aged in their twenties and thirties and there has not been any noticeable uptick in cases in schools, which reopened earlier this month.

While cases were rising steadily before the jump recorded on the weekend the UK's death rate has remained stable. The number of people who died and had tested positive for coronavirus within the last 28 days was eight on Wednesday.

On Tuesday the number was 32 – the highest since the end of July from when the rate has remained below 20 per day.

Johnson described the new limit on gatherings as a "stitch in time to save nine" and aimed at preventing another national lockdown. 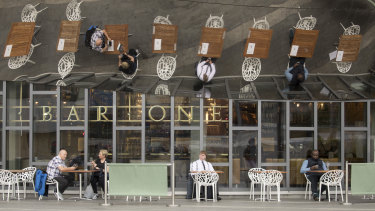 Customers sit at tables outside a pub at the Grand Central shopping center in Birmingham, UK.Credit:Bloomberg

"It breaks my heart to have to insist upon these restrictions upon individuals, upon families, on grandparents," he said.

"This is not something we seek, the trouble is people who think they can take responsibility for their own health and take their own risk, I'm afraid, are misunderstanding the situation.

"Young people are overwhelmingly getting it but they are more than capable of transmitting it to the much more vulnerable, older generation," Johnson said.

Johnson said people could still go to work, go to the pub and eat out, as well as go to the gym and travel overseas but not go to those venues in more than six.

Venues will now be legally required to request contact details and pass them to the National Health Service for testing and tracing. Marshals will enforce social distancing in public areas and Border Force will increase the quarantine required for travellers returning from some countries, including popular holiday destinations France, Spain, Greece and Croatia.

Funerals and weddings with up to 30 people can still go ahead, as can organised sports and the limit does not apply to schools.

Johnson stressed that he wanted the economy to continue reopening but put on hold plans to trial indoor mass events that could lead to a reopening of theatres and concerts, which have been cancelled since the lockdown in March.

Our weekly newsletter will deliver expert analysis of the race to the White House from our US correspondent Matthew Knott. Coming soon. Sign up now for the Herald‘s newsletter here, The Age‘s here, Brisbane Times‘ here and WAtoday‘s here.

Club cricketer hits ball for six through his own car windscreen