London: The Archbishop of Canterbury has praised the "unconventional" royal wedding address by Michael Curry, the American bishop, saying it "blew the place open" and left onlookers gripped.

Archbishop Justin Welby said the rousing words of Bishop Curry, the head of the Episcopal church in the US, showed that "preaching is not a past art", calling his words "raw God". 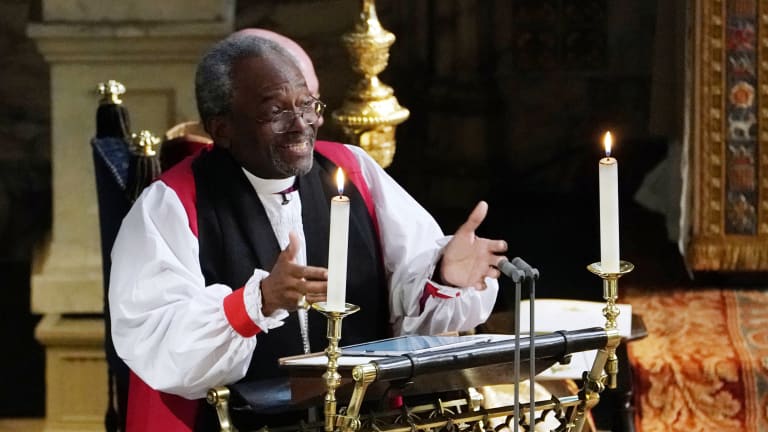 The address, which stretched to more than double the time he had planned at 14 minutes after a series of enthusiastic ad-libs, surprised many watching the ceremony, with phrases including: "We gotta get y'all married!"

Speaking after the ceremony, Archbishop Welby acknowledged it would be "safe to say" Bishop Curry's style was a royal wedding first.

"I think what we saw in that is that preaching is not a past art," he told Sky News. "That the use of language to communicate the good news of Jesus Christ just blew the place open.

"It was fantastic. You could see people just caught up in it and excited by it." Asked what senior members of the Royal family had thought of the address, the Archbishop said: "I haven't spoken to all of them but those that I spoke to were really excited by it and the people afterwards that we spoke to at the reception were gripped by it.

His verdict appears to have been echoed by many in the congregation, with Bishop Curry said to have been praised by the Earl and Countess of Wessex, who told him they "really enjoyed" the sermon. Footage of the ceremony shows the Duke of Edinburgh listening intently, while the Duchess of Cornwall, Duchess of Cambridge and Princess Beatrice smiled.

On the reaction of the Duke and Duchess of Sussex, Bishop Curry said: "They said thank you and they were kind and gracious. The nice thing was during most of the sermon we were making eye contact throughout.

"Their eyes and their smiles and their reactions were talking back. There was non-verbal communication through the whole thing."

Archbishop Welby also suggested the Church of England could learn from the lively address. "There seemed to be very, very good responses," he said. "It was unconventional by royal wedding standards in some ways, but it had passion and if you don't have passion at a wedding when will you have passion?"