Victorians have been given their final warning to return home from NSW as health officials say they could shut the border between the two states “in the coming hours or days”.

NSW recorded 50 new cases of COVID-19 in the 24 hours to 8pm, Friday in what has become Australia’s largest outbreak since Victoria’s second wave last year.

On Saturday, Victoria’s COVID-19 response commander Jeroen Weimar urged Victorians in regional NSW to return home immediately as there was a “significant likelihood” a hard border could be put in place.

“If you are a Victorian in regional NSW you should have left already; you need to come home now,” he said on Saturday afternoon. “The chances are that at some point in the coming hours or days we will be forced to upgrade NSW to red. 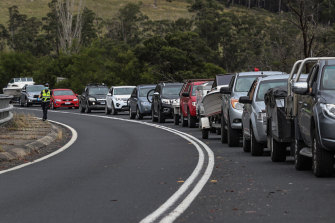 Victorian travellers queued for hours in January after the government announced the NSW border would be slammed shut.Credit:Rachel Mounsey

“If the situation gets to a point where it’s beyond critical we will make it red.”

Victorian authorities confirmed they did not know how many Victorians were currently in NSW but said between 200 and 300 people were returning to Victoria from Sydney each day on red-zone permits.

“That’s a pretty small number and has been fairly consistent for a few days,” Mr Weimar said.

Epidemiologist Adrian Esterman said Victoria should shut its border to NSW, with the exception of border communities straddling both states. 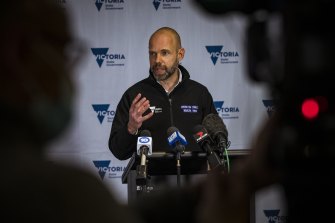 “All the time this outbreak is getting bigger and bigger in Sydney. That means that it’s more and more likely to be spread outside of Sydney into the regional areas. And there’s more and more risk to Victoria,” said Professor Esterman, chair of biostatistics at the University of South Australia.

“Eventually they are going to shut the borders… why not do it now and not take that risk?”

Almost 300 police officers are patrolling the border between NSW and Victoria, with increased patrols near Echuca, Wodonga and Mildura assisted by the Victoria Police air wing. Mr Weimar said more than 1200 travellers on average were being checked at the Victoria-NSW border each day and authorities had reported “high levels of compliance”.

Victoria Police’s acting superintendent of the north-east region, Brett Coloe, said police would not hesitate to take action against people travelling without a permit.

“We won’t be giving any more warnings – if you are coming to Victoria without a permit from one of the designated zones, you will be fined,” he said.

“No one’s off-limits here. Every vehicle that comes through will be checked, whether you’re from Victoria, NSW [or] Queensland.”

On Saturday, Victoria reached 10 consecutive days without recording a locally acquired case of coronavirus, with more than 23,000 people coming forward for testing.

But health authorities issued a warning for passengers who travelled from Launceston to Melbourne on QF1542 on July 2 after a Tasmanian traveller on board the aircraft later tested positive to COVOD-19 when he landed at his final destination in London.

Mr Weimar described the chance of the man being infectious while transiting through Melbourne as “an exceptionally long shot”.

On Saturday, there were 9000 Victorians in isolation after visiting a red zone area but that number was expected to drop significantly overnight when Brisbane, Moreton Bay and regions of the Sunshine Coast were downgraded from “red zones” to “orange zones” at 11.59pm on Saturday.

This means Victorians who have travelled to those areas no longer have to undergo 14 days of quarantine but would need to provide a negative test result before being released. The Northern Territory and regions of Western Australia also become green zones on Sunday.

More than 16,000 vaccine doses were administered statewide on Friday, kicking off Melbourne’s first weekend of relaxed coronavirus restrictions that bring the city into line with the settings in place in regional Victoria.