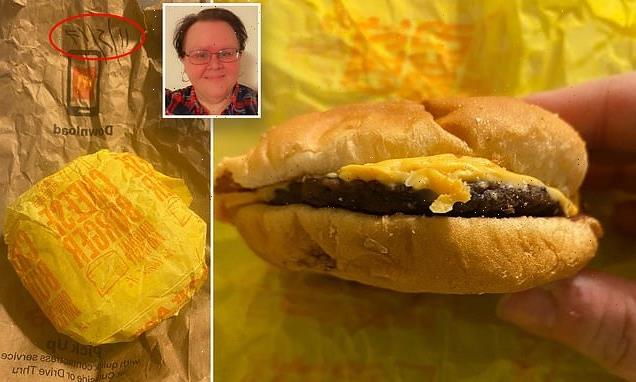 Not Lovin’ It! Receptionist claims McDonald’s cheeseburger she bought five years ago and threw in the back of her car looks exactly the same FIVE years later

A receptionist has quit fast food after discovering a McDonald’s cheeseburger she kept for five years looked as fresh as the day she bought it.

Megan Condry, from Washington DC, claims she purchased two cheeseburgers and some fries from a drive thru in November 2017 but, after finishing off one burger, she threw the other in the back of her car and planned to eat it later.

The 41-year-old says when she found the burger five days later she realised it has not yet started to rot.

She decided to carry out an ‘experiment’ to see how long it would last unaltered and left the burger untouched in the back of her wardrobe until last month.

While sorting out Christmas decorations, she came across it and, despite it being ‘rock hard’, Megan said it still looks the same as the day she bought it.

The bun, beef patty and cheese remain intact with no sign of mould or rot having taken hold.

McDonald’s said they only use 100 per cent USDA inspected beef and that there are ‘no preservatives or fillers’ in their beef patties. 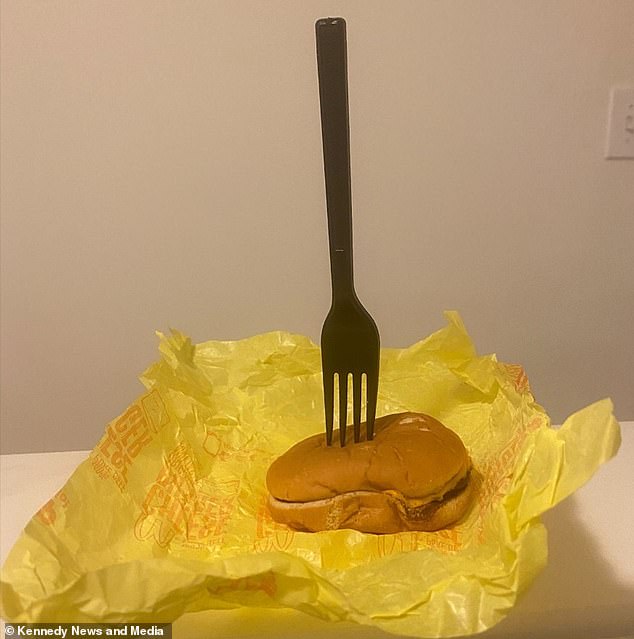 Megan Condry said the cheeseburger looked the same as the day she bought it after five years untouched at the back of her wardrobe. McDonald’s said they only use 100 per cent USDA inspected beef and that there are ‘no preservatives or fillers’ in their beef patties 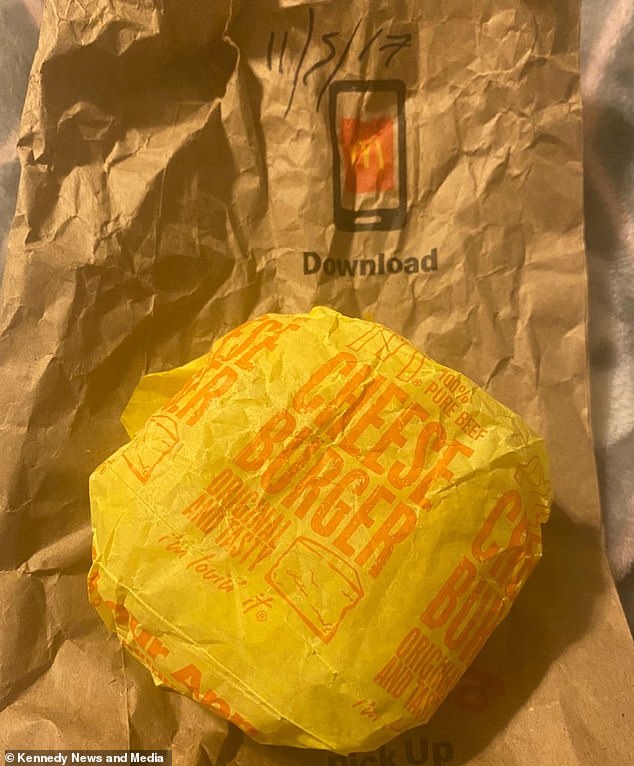 Megan bought the cheeseburger on November 5, 2017. She wrote the date on the bag and placed it in her wardrobe for five years 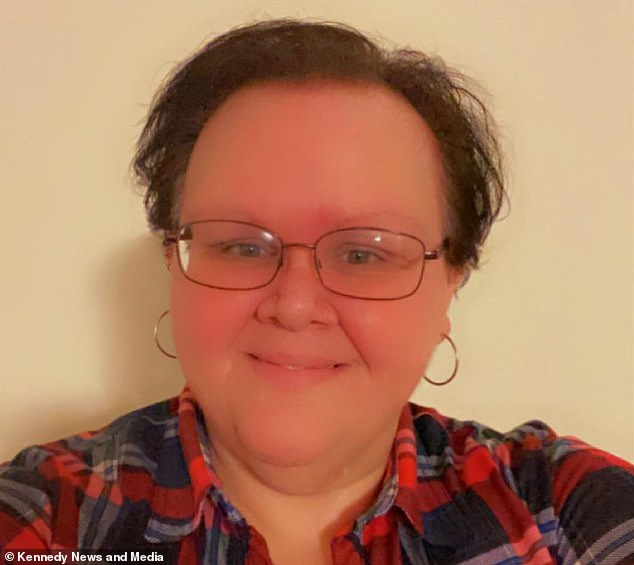 Megan said: ‘It was untouched until around three weeks ago.

‘I was in the closet sorting my Christmas stuff and I knocked the bag and the burger rolled out. I’d forgotten about it.

‘It was rock hard, as hard as a hockey puck. I could probably smash a window with it.

‘Everything is completely dry and it could start to crumble.

‘There was no smell whatsoever and it looks the same as the day I bought it.

‘I’ve tried to pry it apart but if I try to take it apart, I think it would break. It’s just a solid mass.

‘I want to know what it looks like on the inside but I can’t see it.

‘It hasn’t shrunk in size or evaporated. I assume there’s no bacteria to it, it makes me sick.

‘I think it has so many preservatives [in it] or how else would it have lasted that long?’

Megan says she was inspired to carry out the experiment after seeing an old burger being showcased in her doctor’s office.

After finding the burger in the back of her car five days after she bought it, the receptionist scribbled the date on the bag and kept it hidden away.

Megan said she bought two cheeseburgers, fries and a drink, but did not eat the second burger before leaving it in the car and getting distracted.

‘A few days later, I was cleaning my car and I realised I’d forgotten about it’, she added.

‘I got it out and it looked exactly how it was when I bought it. It was rock solid from the air I think but there was nothing wrong with it.

‘The cheese burger and bun looked the same, it was just really hard. It didn’t smell, it hadn’t rotted or grown mould.

‘I like science stuff. A couple of years before I went to the doctor and he had a cake stand with a burger displayed that he’d kept for 20 years.

‘I would have just thrown it out if it wasn’t for me seeing the burger in the doctor’s office.

‘I threw it in the back of my closet and left it untouched until a few weeks ago.’ 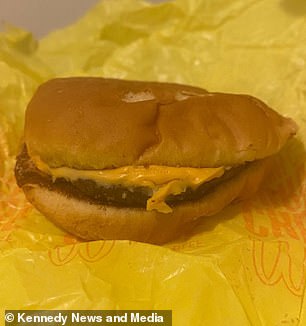 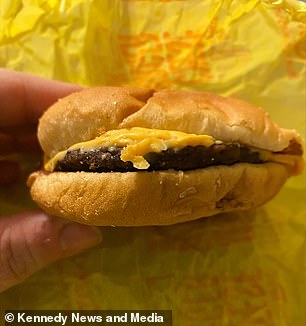 After seeing the results of her experiment, Megan has vowed never to eat McDonald’s again and has even ditched fast food altogether in a bid to lose weight.

As Megan plans to continue her experiment, she has re-wrapped the burger and placed it back in the cupboard where she’ll leave it for another five years.

Megan said: ‘I’m going to put it back in the closet and see if it dies or changes or disappears.

‘McDonald’s isn’t my thing, I got it that day because it was close to work but I have friends who eat fast food on a regular basis and they say they feel sick.

‘People think it’s so gross. It doesn’t surprise me that it didn’t rot. Is this why we feel bad after eating fast food?

‘Whenever I ate it, my stomach wouldn’t feel good.

‘I can’t imagine wrapping my hand around that and eating it now.’

A McDonald’s USA spokesperson said: ‘Our burgers are made only with 100% USDA inspected beef. There are no preservatives or fillers in our patties and the only thing ever added is a touch of salt and pepper on the grill.’

WHY DIDN’T THE CHEESEBURGER DECOMPOSE?

Dead organic matter – such as a McDonald’s cheeseburger – is potential food for bacteria, fungi and other microorganisms.

These microorganisms secrete enzymes to break larger food molecules into smaller molecules that they can absorb, which they then use for energy to divide and multiply.

However, preservatives – chemical compounds that are either natural or synthetic – are added to foods to help prevent or slow spoilage by inhibiting microorganism growth.

According to the McDonald’s website, preservatives are used in some of McDonald’s food products ‘only when absolutely necessary’, to ensure the food is safe to eat.

‘They will be used, for example, to prevent our bread and cheese from going mouldy and our pickles from spoiling,’ the fast food giant says.

However, its meat patties contains no preservatives or fillers and ‘the only thing ever added is a touch of salt and pepper on the grill’.

So this means the cheeseburger patties could potentially decompose quickly under the right conditions, but the bun and cheese would not, due to the added preservatives.

Decomposition rates are highest in damp, moist conditions with adequate levels of oxygen, but Mrs Condry’s wardrobe would likely have been lacking in terms of moisture in the air.

McDonald’s explains: ‘In order to decompose, you need certain conditions – specifically moisture. Without sufficient moisture – either in the food itself or the environment – bacteria and mould may not grow and therefore, decomposition is unlikely.

‘So if food is or becomes dry enough, it is unlikely to grow mould or bacteria or decompose. Food prepared at home that is left to dehydrate could see similar results.’

Although oxygen levels – another factor needed to microorganism growth – were likely sufficient, it’s possible that the wardrobe was also not at the right temperature.

Spoilage microorganisms, including various species of bacteria, yeasts and moulds, can grow well at temperatures as low as 40°F (4°C).