Miami, Florida: When Americans – and viewers around the world – tune in to watch the results of the US election come in on November 3 they are going to see something very different than what they are used to.

The coronavirus pandemic is expected to make it more difficult for media outlets to project whether Donald Trump or Joe Biden has carried a particular state if the results are close. As for the election outcome itself, it’s possible the winner will not be known until several days after the election.

Trump and his campaign have made clear they are prepared to use the confusion to claim a premature victory if the President is leading in enough swing states on election night. 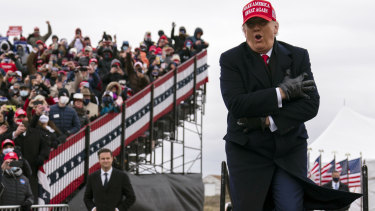 President Donald Trump has said the results should be known on election night despite the surge of early voting. Credit:AP

Making this year so unusual are the differing ways Republicans and Democrats have responded to the challenges of voting during a pandemic.

Democrats have embraced options to vote early – either by sending in a postal ballot or voting in-person ahead of election day. Republicans have indicated they are much more keen to vote in-person on election day as they would in a normal election.

These different rules are expected to lead to two conflicting phenomena on election night: one in which Biden may appear to have an illusory early advantage and another in which Trump may not be doing as well as it initially appears.

The first phenomenon has been dubbed the "blue mirage" and is expected to occur in states such as Florida, North Carolina, Ohio and Iowa. These states pre-count their early votes and are expected to upload them soon after polls close around 11am AEDT on Wednesday. Those results are likely to look very good for Biden given the enthusiasm Democrats have shown for early voting. Then the results of the election day vote will be added in batches throughout the night. Trump is likely to claw back some of the Democrats’ lead and possibly overtake it.

The results from Florida, a big electoral prize, will be especially closely watched. Election officials in Florida are used to processing large numbers of mail-in ballots, which increases the chance of the result being clear on election night. If Trump doesn’t win Florida, he has little to no chance of winning the election. Biden still has a plausible path to victory without Florida, though he would dearly love to deliver Trump a knock-out blow there.

The results from states such as North Carolina and Ohio will also give us clues as to what is occurring around the country. Is Donald Trump maintaining or extending his dominance in rural counties? Have the Democrats made gains in the majority black areas where they underperformed four years ago? 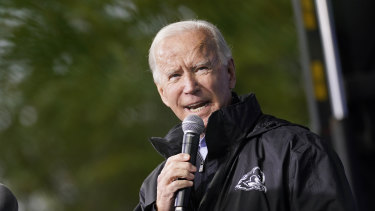 The early results from states such as Florida and North Carolina are expected to look good for Joe Biden.Credit:AP

The second phenomenon has been dubbed the "red mirage". This is where the results are expected to look rosy for Trump early in the night but may end up flipping to Biden. This is likely to be especially important in Pennsylvania and Wisconsin – two of the most hotly-contested states in the election.

Unlike in Florida, these states only start counting their early votes on election day. Given the huge number of mail-in votes, it’s likely to take several days to count them all. This could allow Biden to slowly claw back early Trump leads – a so-called "blue shift". This will also be a factor, though to a lesser degree in Michigan, which starts counting the early votes on November 2.

The Trump campaign has laid the groundwork to take advantage of a "red mirage" to declare victory on election night or challenge the legitimacy of the votes counted after election day.

Earlier in the day Trump campaign adviser Jason Miller said: "If you speak with many smart Democrats, they believe that President Trump will be ahead on election night, probably getting 280 electoral [votes], somewhere in that range.

"And then they're going to try to steal it back after the election."

In fact, it’s common – even in normal election years – for votes to be counted long after election day. Results are never officially certified on election night: media networks "call" the outcomes in various states based on their own projections.

If Trump does prematurely declare victory, it would not have any official impact on the results. But it would create a combustible atmosphere and heighten the chance of unrest on the streets.

The key to making sense of the results on the election results is likely to come down to one simple word: patience.