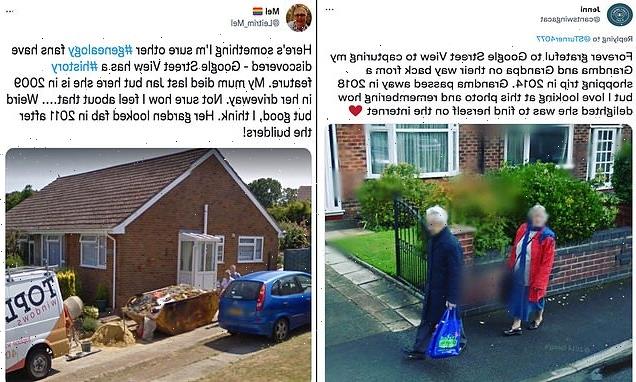 Bereaved relatives are searching for their dead loved ones on Google Street View, saying it gives them comfort to see things how they used to be.

One saw her dead mother sitting outside a cafe enjoying a cup of coffee four years before she passed away.

And another recounted how his girlfriend had found her grandmother standing at a bus stop waiting to catch a bus in 2008.

Hundreds of people have tried the trend with many finding images of dear friends and relatives who have since died – and some saying it transported them back to a happy time full of lovely memories.

Some even found their pets using the feature, which allows you to look back as far as 2008 on Google’s Street View feature. 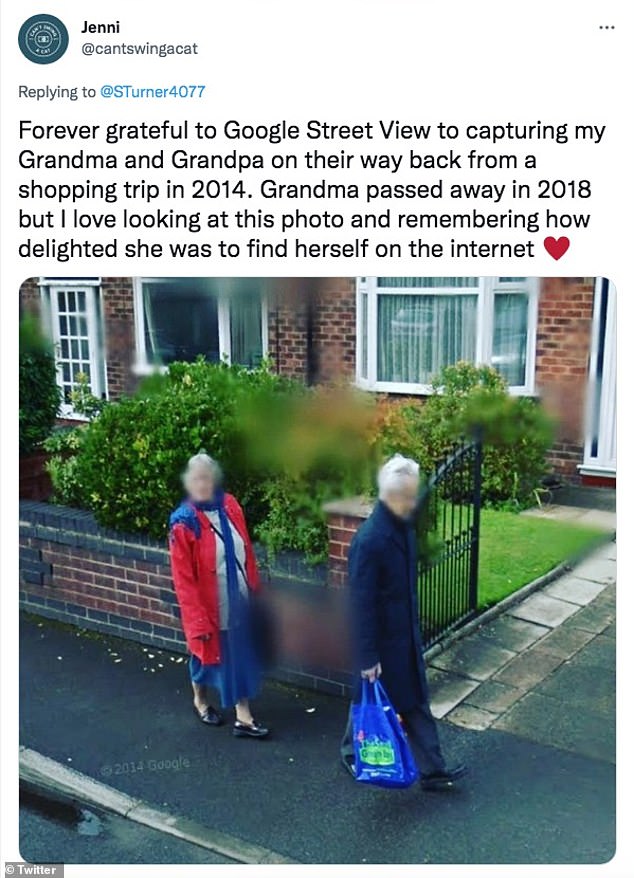 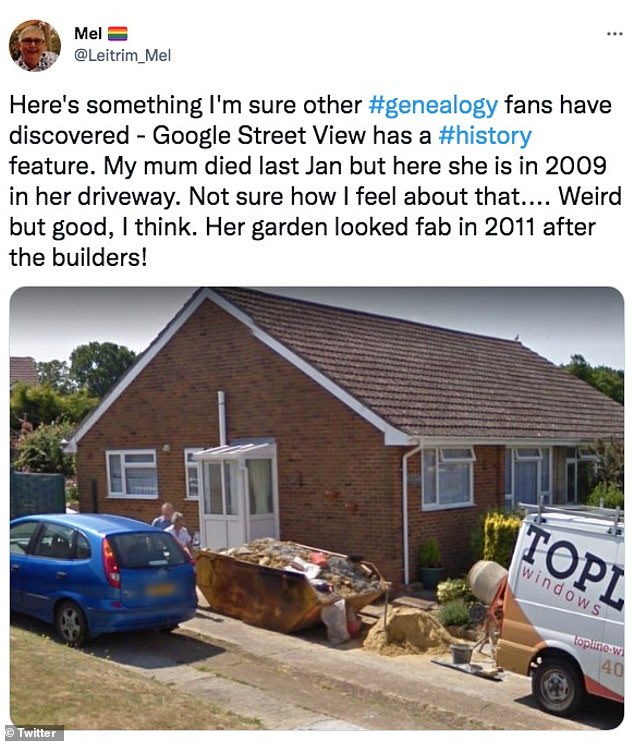 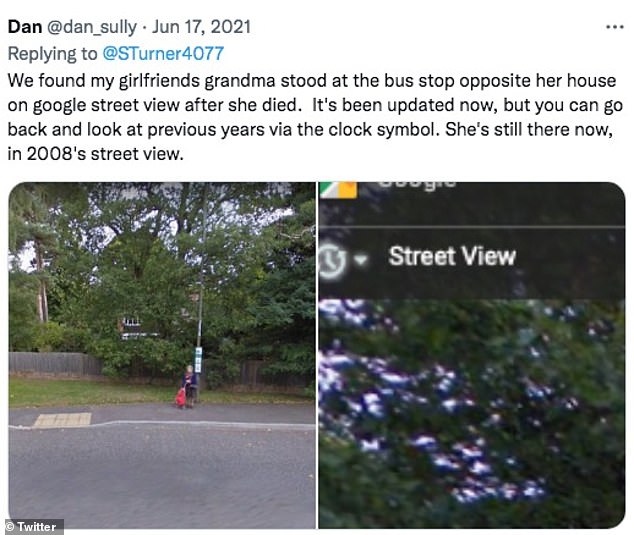 One said: ‘My mum died in 2012, but there is still an image of her on Google Street View from 2008, so I’m able to look back to and know that in September 2008 she was happily drinking a coffee outside Cafe Delight on a sunny September afternoon.

One woman saw his granddad weeding his path.

She said: ‘Here is my granddad doing some weeding, he was a very keen gardener. I miss him.’

Another saw his uncle, who had been dead six years.

‘The fella in this Google Street View picture is my Mum’s brother, Uncle Bruce,’ he said.

‘This is still up on Street View even though he died about six years ago.’ 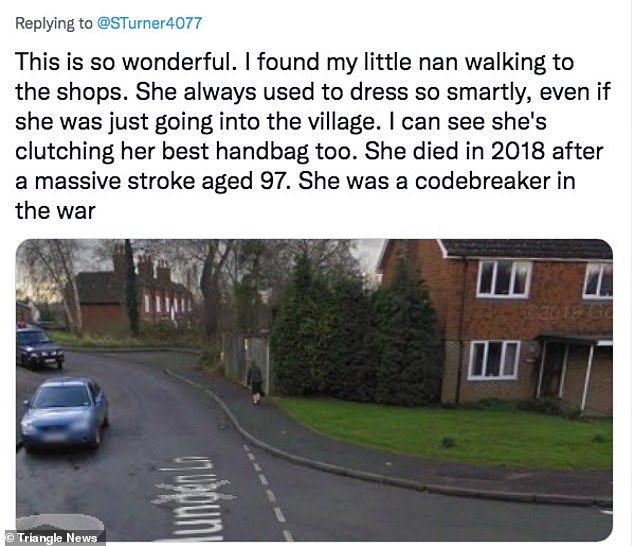 Another Twitter user was absolutely overjoyed to find their grandparents walking back from a shopping trip together, clearly having spotted the Street View camera.

She said: ‘Forever grateful to Google Street Viewto capturing my Grandma and Grandpa on their way back from a shopping trip in 2014.

‘Grandma passed away in 2018 but I love looking at this photo and remembering how delighted she was to find herself on the internet.’

In Yalding, Kent, Street View captured a poignant image of someone’s nan walking to the shops, dressed in her Sunday best.

Her granddaughter said: ‘This is so wonderful. I found my little nan walking to the shops.

‘She always used to dress so smartly, even if she was just going into the village.

‘I can see she’s clutching her best handbag too. She died in 2018 after a massive stroke aged 97. She was a codebreaker in the war.’

In the US, one saw her recently departed dad in the yard, working with his tractor.

‘Out of curiosity I checked out my parents’ house on £GoogleMaps and there in the street view was my dad working in the yard in 2011,’ she lamented.

‘He died in March and this picture gives me comfort that maybe he’s in another dimension happily puttering around in his yard forever.’ 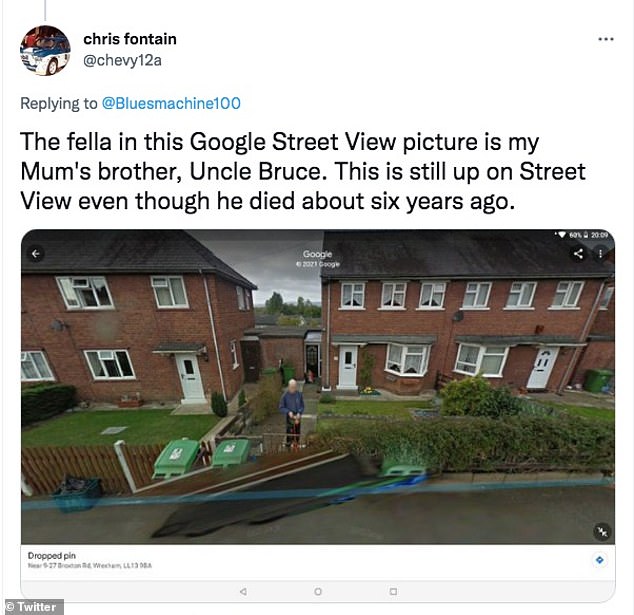 Another saw his uncle, who had been dead six years. ‘The fella in this Google Street View picture is my Mum’s brother, Uncle Bruce,’ he said. ‘This is still up on Street View even though he died about six years ago’

Another saw their mother walking down the road in Normandy, France.

‘My mum’s on Street view in Normandy….from the summer before she died.

‘It’s strangely comforting to see her pottering about in a place she called home.’

A woman was filmed at a bus stop in 2008 – much to the delight of her granddaughter.

Her boyfriend said: ‘We found my girlfriend’s grandma stood at the bus stop opposite her house on Google Street view after she died.

‘It’s been updated now, but you can go back and look at previous years via the clock symbol. She’s still there now, in 2008’s Street View.’

Another added: ‘Here’s something I’m sure other genealogy fans have discovered – Google Street View has a history feature.

‘My mum died last Jan but here she is in 2009 in her driveway. Not sure how I feel about that….

‘Weird but good, I think. Her garden looked fab in 2011 after the builders!’

And one lady told a mournful story about her experience of checking Google Street View.

‘I look at my mum’s old house on Google maps street view, the house where I grew up,’ she said.

‘It is still her house, she is still alive, I am still visiting every few months on the train to Bodmin Parkway, her little pink car will still be in the garage, but I will have taken a taxi from the station and when it arrives she will be standing in that doorway, smiling and waving, smaller than the last time I saw her. 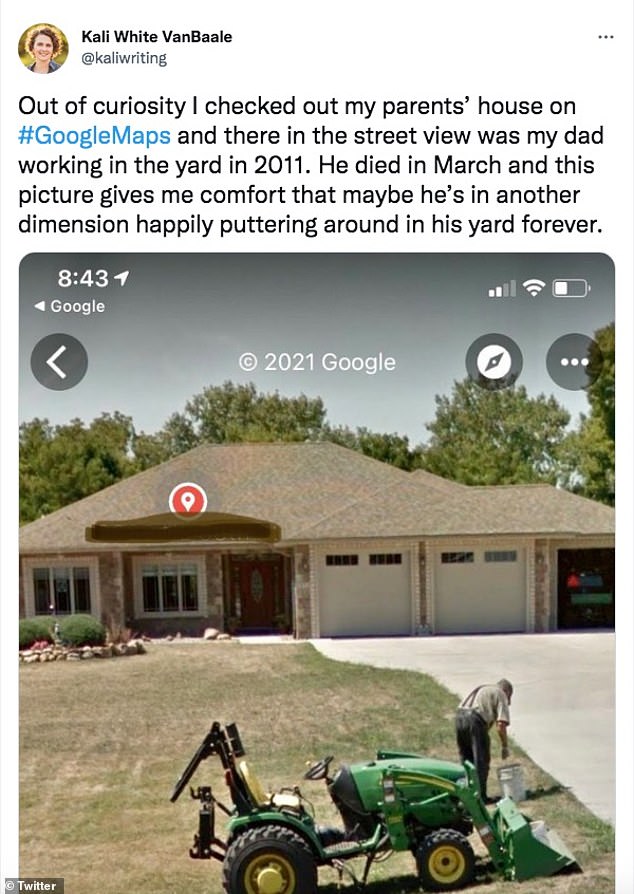 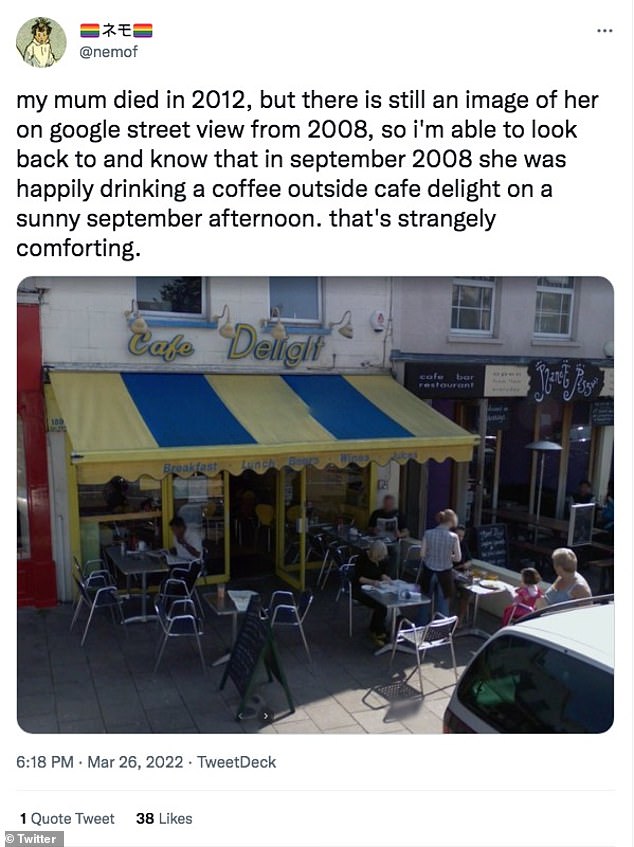 ‘We will play Scrabble and watch Tipping Point and there will have been no pandemic, no other deaths, no as-yet-undiscovered illnesses.

‘And I won’t know how perfect it is and I wouldn’t go back and say, even if I could, because sometimes it’s best not to know.

‘I take a Screen Print of the house, with the light on, because it won’t last forever, and one day the Google van will go back down that street and replace her house with someone else’s and though there may be a light on in the window it won’t be her.’

Even pets have been immortalised in the feature.

One said: ‘Oh my word I love this thread!! I didn’t know about the archived images and I’ve just checked and found my dog who died last week sat at my mum’s gate!!

Google Street View began in the United States in 2007 and was rolled out to other countries in the following years.

It should blur faces, but some have spoken out against it saying it hinders privacy.